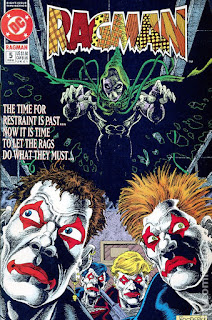 ...And we're back Tatters! How about that? More consistency and content with the posting! Must've been that ego boost Pat Broderick gave me recently. Anywho, ON WITH THE REVIEW!

This time around we're talking about issue #5 in the 1991 series. Plots and breakdowns by Keith Giffen, script by Robert Loren Fleming, art by Pat Broderick, colors by Anthony Tollin, letters by Albert DeGuzman and edited by the team of Dooley and Helfer. Ragman #5 was cover dated February of 1992 but actually hit stands on December 10th, 1991. (Thanks to Mikes Amazing World for this info)

We open with Bette (an shockingly non-disappointing fact) taking the Golem out for coffee. Of course the Golem doesn't drink any and off the pair go into the streets and alleys of Gotham. Bette speculates that the reason the Golem didn't drink any coffee is because he doesn't actually have a mouth. They pass by the alley where Rory's father died and Bette excuses herself to say a quick prayer and pay her respects as the Golem senses the Ragman in this place. A quick jump up to the rooftops and... 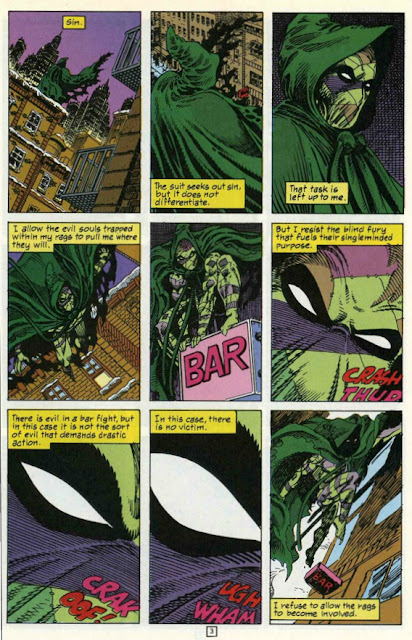 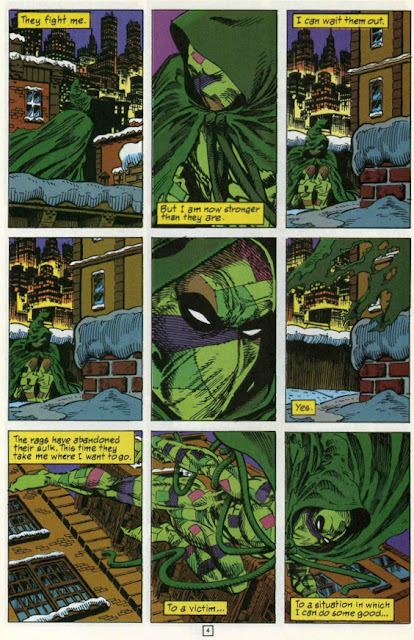 Meanwhile, Bette is busy expanding on her "no mouth" theory and the Golem senses the Ragman using his powers. The Golem thinks to himself, "The young one is becoming more experienced. And as his power grows, mine ebbs!" Bette notices his weakened demeanor and suggests they visit her friend the doctor. Cut to Ragman taking on a street thug robbing (perhaps more) a woman in a back alleyway. Rory thinks to himself that the last time he confronted an "evil doer" he had to force himself to back away. But this time is different... 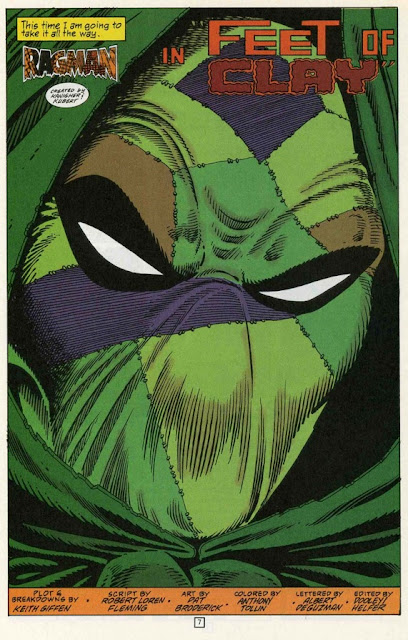 Down at the local police precinct, the cops are talking about the latest rash of "demon" reportings in the area. The desk sergeant shrugs it off when "CRASH!" the street thug comes crashing through the window onto his desk as Ragman looks on from a nearby rooftop. Over at the doctors office, the doctor informs Bette that he thinks her friend is dead! He's walking around but he has no pulse or vital signs. Informing the Golem that the doctor is, "a great guy but I think he drinks" off the pair go once more into the snowy streets.

Back at Rags 'n' Tatters, Rory overhears the Rabbi giving the Ragman suit a talking to, telling it that the suit is being tamed by Rory. In the alleys, the Golem is busy contemplating his current situation, "The Rags, I must find them and destroy them! It is the only way to preserve my own life! And that is my mission...preserving life! The Rags are composed of evil souls. So I am justified in destroying them! Even if it feels wrong."

Up in a Gotham high rise, the big boss reads a headline from the Gotham Times "Infant Killed In Deadly Street Gang Crossfire". He thinks to himself that the kid is better off given that he himself grew up in those same streets. But he has other concerns and is off to a billionaires ball for the evening. But little does he know that this same headline is being read across town... 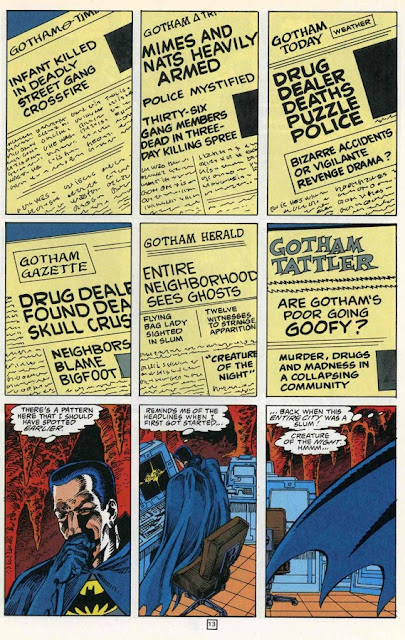 In an alleyway the Golem is taking on a couple of Mime gang street punks quite mercilessly and it takes Bette to calm him down as she calls an ambulance for the kids. At Rags'n' Tatters Rory and the Rabbi are discussing his recent efforts as the Ragman and Rory resolves to disarm the local gangs and doesn't wish to be deterred. Back in the alleys, the Golem is thinking how awful it is that an "old woman must sleep in a cardboard box" when he feels the suit activate. As a finger falls off, signaling the loss of further power, the Golem gets up and walks out of the alley and into the snow, seeking out the Ragman. 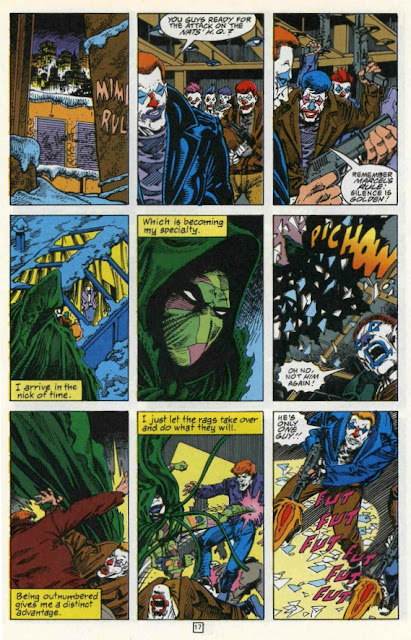 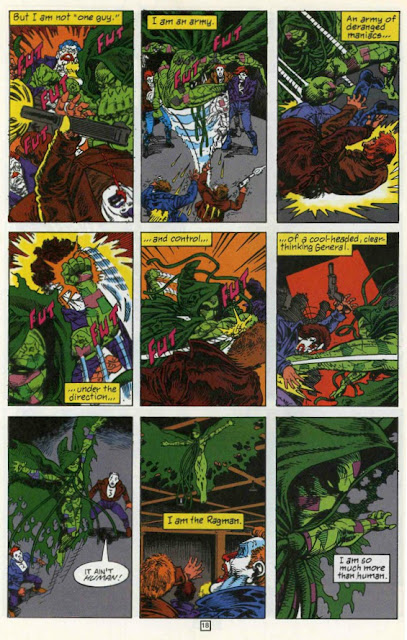 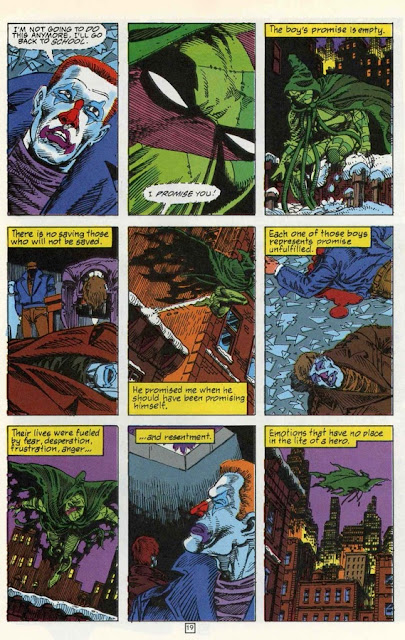 As Ragman leaps off into the night, a rag drifts down into the palm of the Golem as he thinks to himself, "A hero. He's killing me! I was almost human before he came. For over forty years I fought the good fight! In just another year or two, I would have been completely human! I would have been able to speak! I will NOT return to clay! One way or another, I'll have the last word!" With a silent farewell to the sleeping Bette, the Golem leaves it all behind. Prepared for the final battle. The Rabbi senses this and thinks, "My two children...what have I done to you?" 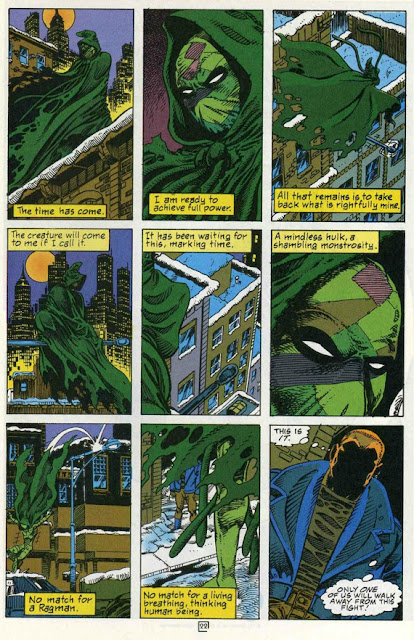 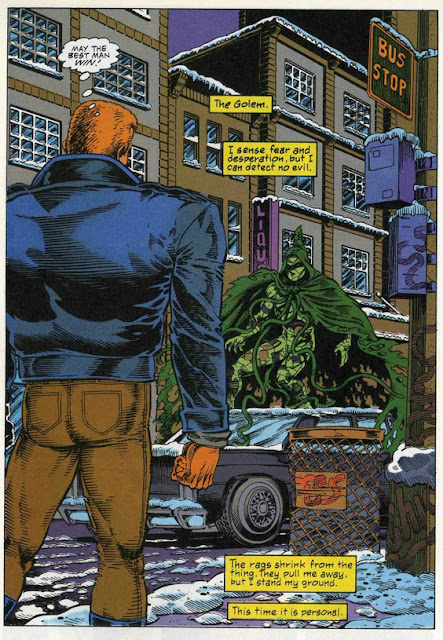 And as the two wielders of the same power face one another, the Rabbi silently blames himself until there is a knock at the door. It's Bette warning him that Rory is in trouble. And that ends the issue.

You know, this wasn't as bad as I remembered. LOTS of Ragman in action this issue. The focus on the Golem I had initially thought to be pretty boring. However, on this read through I appreciate it more. Getting this focus on the Golems inner thoughts gives him character and tragedy. If we weren't given this inside glimpse into the Golem we'd have assumed Ragman would be going up against a soulless, mindless hulk. By giving him a soul, you almost feel bad for him. The fight to come becomes not a "win or lose" but a transition. There's some sense of poetry to that inevitability factor.

As for Rory himself, I worry sometimes if his inner dialogue when he's in the Rags is being portrayed as TOO "flourished". As in, it's just different enough that you could be excused for wondering if Rory and the Ragman are two separate entities/identities.

Lastly, I'm starting to think this "big boss" dude is utterly unnecessary. You could have had Rory confront the issue of the rival Gangs (and the Golem) without him. No mysterious benefactor supplying guns. Just a group of rival gangs with access to weapons. But we'll see as we continue how that works out. 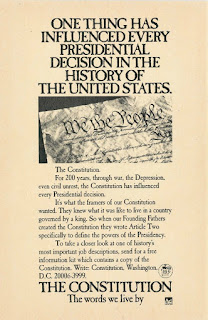 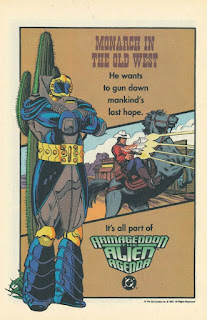 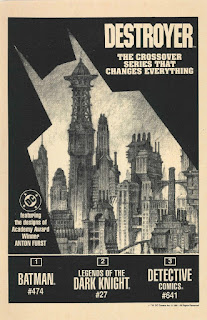 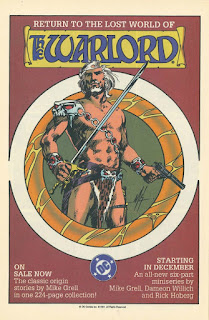 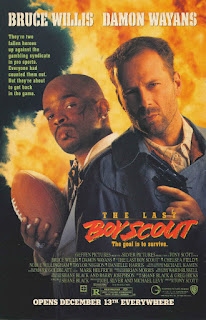 No experience with any of that. Including that "Last Boy Scout" movie. Despite the presence of Bruce Willis, this looks god awful. No desire to see it.

As for the rest, Warlord's origin was recently covered on the Secret Origins podcast hosted by Ryan Daly. Though the ORIGIN from the Secret Origins series was supposedly lackluster, I've heard nothing but rave reviews from fellow comic fans regarding the Warlord series as a whole. If you're curious, I highly recommend you check out episode #16 of Ryans AMAZING podcast.

Now onto the letters page to send us off! 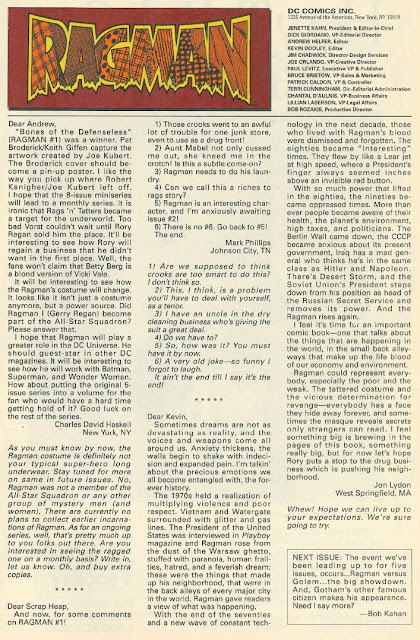 Wow. That last letter from Jon Lydon sure packs a wallop. Regardless, it's good to see so many people so positive about Ragman! And as for that Ragman collection...how about it DC? It's been YEARS now. Surely you've got enough material for an omnibus!

As ever fellow Tatters, thanks for reading the blog. Be sure to COMMENT on these posts and let me know YOUR thoughts! I love hearing from you all! Til next time!
Posted by Chad Bokelman at 3:58 PM