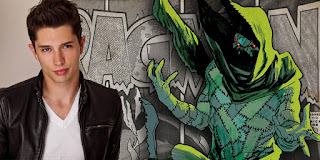 Yeah. It would take a massive announcement like this to shock me back into posting. Actually, shock is a great choice of words.

On Saturday July 23rd, 2016 during San Diego Comic Con the powers the be at The CW, DC Comics, and Arrow announced that actor Joe Dinicol will be cast in the role of Rory Regan aka Ragman for the shows fifth season.

Take a few moments to absorb that. Because you better BELIEVE I did.

*whew* We good? Ok. Let's proceed. Because I'm IMMEDIATELY going to overlook the age/look of Joe here for the role. Why? Because anytime I've had criticism for the way an actor set to portray a DC character on the CW looked, I've been proved wrong in thrilling ways. Grant Gustin as Barry Allen and Robbie Amell as Ronnie Raymond for starters. So, at this point, I'm just going to have faith in DCTV casting until they give me an on screen reason to dislike the choice.

The first question we need to as is, "Which version of Ragman will we get in Arrow Season 5?"

It's been widely reported and hinted at that Arrow Season 5 will take a step back towards the feel the show had during it's 2nd season. Which many are interpreting as less super-powered and magical beings and more street level stuff. I don't know if that's true (click bait comics media likes to run with things if it means a new article) but IF so, it would seem that introducing a post-crisis Ragman to Arrow would counter that directional course correction for the show.

HOWEVER we DID get Constantine, Vixen, & Damien Darhk in Season 4 and, while the magical aspects of the show were criticized at times by a few, there were aspects of it that seemed to draw a chorus of cheers from fans.

Keep in mind though, it's entirely possible that the Ragman/Rory we get could just be another vigilante operating in Star City. As in, just a guy in a suit with a cause personal to him. IF that's the case, I'll obviously be disappointed. But if it IS, I hope it's just a means to an end much the same way Arrow introduced Barry Allen before ever giving him powers. Set up the character and his motivations and THEN introduce his powerset.

Regardless, we've already been given our first look at Ragman in action for Arrow Season 5! (Click each image to enlarge) 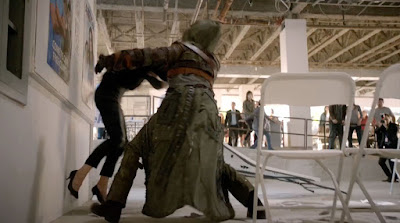 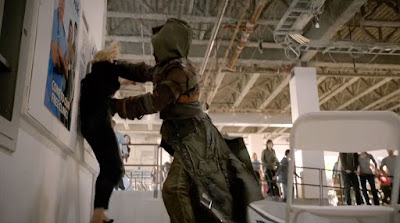 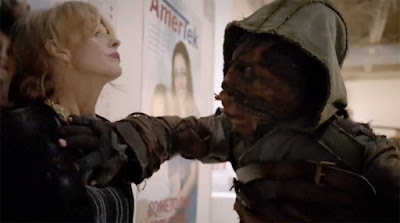 Now, keep in mind, these are screenshots from a moving scene in a clip from the Arrow Season 5 trailer. I'm slightly disappointed there is no cape in this version of the suit, but I have to admit that this looks pretty amazing for what it is. There ARE patches, there IS a hood, and it LOOKS like there is a full face mask/covering. It looks dirty and messy and....JUNKY. It works. And if we can't get a cape, at least we get a trench-coat flopping around as he moves.

One other question I would ask: "Will Rory Regan be portrayed as a Jew?"

The character is highly steeped in Jewish mythology/folklore (particularly Post-Crisis) so will that remain? Rory himself never claimed much active belief in the religion of his father (though he always seemed more of a traditional Jew as opposed to a practicing one). I'd be curious, in an era of equality and representation to see if the CW gives equal representation to someone of faith. Or if they downplay it (or ignore it entirely) in order to avoid criticism.

No matter WHAT they do with the character, I'm not ready to pass judgement until I have something concrete to act upon. Right now the only thing we have that's concrete are the stills and the name of the actor.

I guess I better start pumping out the posts again... ;)

(Check out my LIVE video after the announcement!)


Be sure to LEAVE A COMMENT on this post! Tell me what YOU'RE thinking! I'd love to hear back from you!
Posted by Chad Bokelman at 8:05 AM 1 comment: