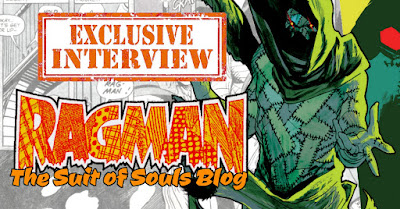 Hey Tatters! (If you're new here, that's what I call fans of Ragman.) Welcome back! When last we spoke, I was excitedly breaking down all I could about the upcoming Ragman series from DC Comics. The series was announced, the first issue solicit was out, and some interior pages and cover art were available for us to whet our appetites with. So why so long between posts? Well, life happens, series wrap up posts take a bit to coherently write up (since we wrapped coverage of the 1991 Giffen & Broderick run), and I've been working behind the scenes to bring you something very, VERY special.

I have been given the opportunity to speak with the creative team behind the new, upcoming 'Ragman' series from DC Comics...OFFICIALLY. That is correct. This interview is OFFICIALLY sanctioned by the powers that be at DC Comics. Now I've been extremely fortunate to interview both Pat Broderick and Sholly Fisch here on the blog before. Today we add to that esteemed interview line-up with the writer and artist behind the new 'Ragman' series, Ray Fawkes and Inaki Miranda, asking the questions that we the fans truly want to know the answers to!

THE SUIT OF SOULS: Despite an on again, off again publication history, Ragman has endured since his creation in 1976. Some attribute this to his Judaic roots, others attribute it to the post-crisis supernatural power set. So Ray, I have to start by asking, what was it like taking on this obscure but beloved character?

RAY FAWKES: It’s a pure pleasure, start to finish. I’m a fan of Ragman - both the grounded street-level early stories and the more supernatural version that followed, so I wanted to make sure that we could pay tribute to both while moving forward with a new take. His cultural heritage is also very important to me, and I think that it definitely plays a part in his appeal as a hero!

TSoS: Inaki, in the series, we see Ragman with a new suit! What was that process like and what inspired you to make the changes you did?


INAKI MIRANDA: I love Ray's new premise for Ragman. I was instantly hooked by this new representation and its possibilities. However, my first reaction to the design was that I wasn’t too keen on the “patchwork” vibe of it. The mythology that Ray has come up with gives the suit a new fantastic dimension which I think was asking for a new visual look. The patches and stiches wouldn’t quite fit either the new story or the background of this new Suit of Souls.

So, I asked if I could try a new design and luckily DC said “yes”.  I wanted to make him look more like a first row superhero, one that could totally stand next to Batman and look as tough and cool as him (I know, no one is as cool as the Batman, but still…) and at the same time have his own rough distinctive aura. Of course, it was very important not to drive away from or corrupt what Ragman is at his core and all of the central elements that make him special to the fans. One of the things that Ray asked me from the start was that he wanted the rags to behave wild, showing how Rory isn’t totally controlling them.

Basically I took inspiration from all those creations that I have enjoyed, and that are part of my fan life, that play with the concept of dark hero (Batman, Soul Reaver, Darkness, Spawn.. and I even gave him a bit of a Spider-Man feel to his body language… the long bandages were just asking for that). Ragman is a powerful hero just learning how to control the suit, which has its own life and interacts with Rory through the souls it absorbs (did I mention how much I love the concept?).  So, the idea behind his new look was to play with the Suit of Souls as a live armor made from bandages. I imagine the rags being as rough as sand paper if needed, and impenetrable, he’s wearing no fabric, it’s a suit made in hell. The new suit is tactical, it’s functional. Also, I didn’t want him to look like a mummy, so the rags don’t just wrap around his body, they create an exoskeleton, they follow the logic of the human muscles (not quite but close).

I love how Ray took the design and enhanced it with logic and properties (which I won’t spoil here). I also felt Ragman deserved his own chest symbol, so I gave him one, which is really a glyph from a demonic secret alphabet. If the future is kind, it would be so cool to deepen into the story of the origin of the Suit of Souls and explain the mythological powers of this alphabet.

I’m extremely happy with what Ray and I have re-imagined together. And I’m extremely thankful to DC for the creative freedom they gave us. There’s a lot of love from all the parts involved. I hope it shows and is ultimately in benefit of the final product's enjoyment and the fans. 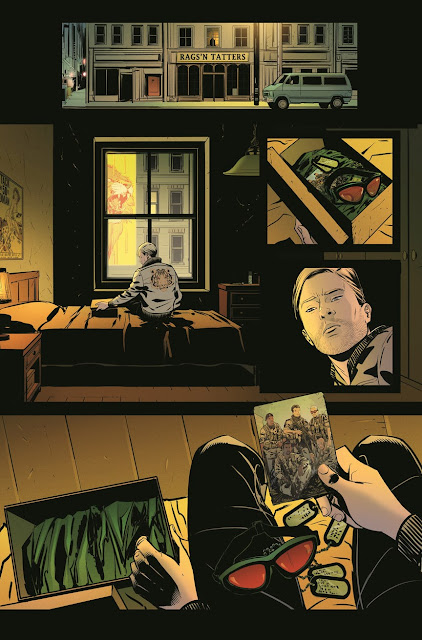 TSoS: One of the core elements of Rory Regan's past has always been his status as a veteran. While it influenced his personality, it wasn't part and parcel with his origin. What inspired you to bring the two elements closer together into lockstep with one another?

RF: It just seems like a feature that would be very powerful in his life- a real defining factor. I also wanted to write a story about heroism in the face of trauma, and Rory’s veteran status gave us a perfect route to address that. Rory is selfless at heart - that’s why he served in the military, that’s why he’s a hero even before he gets his hands on the Cloak of Rags, and that’s why he becomes a superhero.

TSoS: Between the Israeli desert and all of the symbolism in the book, the Rags N' Tatter shop, the demonic creatures, and Gotham City itself Inaki, you have a TON of artistic setting to play around with! What's it like for you working on this title when you're playing in all of these various sandboxes?

IM: Gotham is the first reason I wanted to start working on the book as soon as possible. It must be my favorite fictional place of all time. I could spend my whole career drawing stories in Gotham. I think the dark atmosphere is perfect for Ragman. There are a lot of settings in the book, but what’s even cooler is that they all feel very integrated, it’s Gotham, but more importantly, it’s Ragman’s world. A demonic dimension is invading Gotham…Ragman is able to see things that aren’t there for a normal human being. I think that’s really cool. This is something that readers will have to figure out by themselves. “What is there only for Rory’s eyes?”, there’s an open interpretation there, and we play with this concept a little.  Then there’s the color green, Eva did a wonderful job by giving the book (and the character) a personality, tying Rory’s past scenes to the present Ragman through the use of greens. And the neon signs on Gotham are just too cool.

TSoS: What we've seen so far echoes faithfully so many elements of the Ragman everyone knows and loves! So before we wrap up, what can fans look forward to going forward into the series?

RF: Fans can look forward to an action-packed battle against great evil spirits, with our Rory right at the centre, helped by some other DC favourites! As Ragman, he's going to show them all what true heroism really means!

IM: This is an origin story, so readers will follow Ragman through his own “path of the hero”, which will mean discovering new powers and possibilities regarding the suit. And also, a couple of cool DC characters will join the show and will make everything even cooler. Oh, and they can also expect Ragman to rock and be fighting for his life in every issue. It’s relentless. Ultimately, I hope they can experience the same fun we had creating the book.

And that, as they say, is that! Thank you so very much to Ray Fawkes, Inaki Miranda, and DC Comics! It's extremely flattering to be given this opportunity. There is so much to unpack here in this inteview but I really don't want to clutter up this post with my own thoughts.

In the meantime, let's hear YOUR thoughts! Be sure to leave a comment below and tell me what YOU think about the upcoming series and what you're excited for! Ragman is a fantastic character and if you like the series, be sure to tell everyone to pick it up! And let DC Comics know, "We want more Ragman!!" That's all for now Tatters!

Ragman #1 is available starting on October 11th, 2017 from DC Comics, written by Ray Fawkes with art by Inaki Miranda and covers by Guillem March!
Posted by Chad Bokelman at 12:30 AM 4 comments: