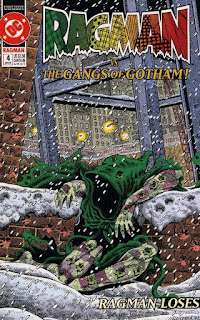 Welcome back beloved Tatters! This time around we're talking, obviously, about 'Ragman' #4 with plots and breakdowns by Keith Giffen, scripts by Robert Loren Fleming, art by Pat Broderick, colors by Anthony Tollin, letters by Albert De Guzman, and edited by the team of Dolley & Helfer.

We open as we normally do in this series, with Ragman standing in a dark and snowy alley in Gotham. Rags stands over a low level dealer who is begging for his life, offering to cut Ragman in on the cut of his "small fortune". 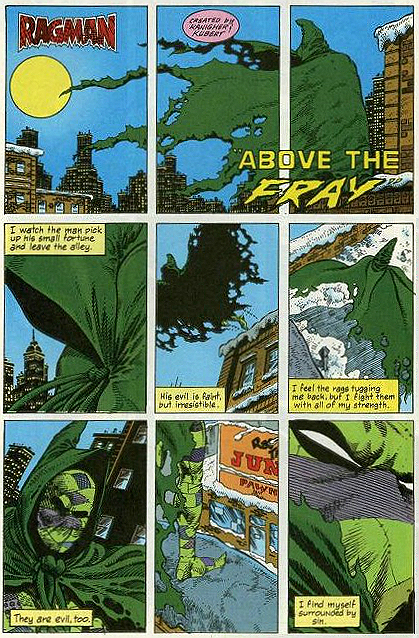 "I find myself surrounded by sin." Such a simple line but oh how I LOVE it for Ragman. Anywho, moving on...

Back at 'Rags N Tatters', the Rabbi is worrying about Rory's efforts as Ragman this evening over a cup of coffee (tea?). Rory comes in and is asked how the night went. Evidently not killing (or absorbing the soul of) the man he confronted in the alley was a test put forth by the Rabbi to test Rory's skill as the Ragman. A test to see how well, one can only assume, Rory can resist the call of the suit.

Back in a Gotham high-rise, the big boss-man behind all the latest goings ons talks with his henchmen about the trouble that Rory (not known as Ragman at this point) has been giving them. Things now cleared up, the boss believes Rory is now a known element and thus has lost his surprise factor. He then asks, "Who's in a position to take over that neighborhood?" His thugs respond that some gangs have risen up to fill the power vacuum... 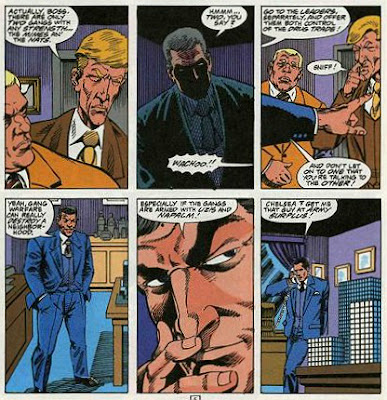 Back at 'Rags N Tatters', the Rabbi is continually pestering Rory about his efforts as the Ragman (even while Rory showers, which drives him nuts). Rory states that he needs time to process everything he's experienced. The Rabbi goes to sleep and Rory opens up the shop for the day. His first customer? A member of the Shamrocks, a local gang. The Shamrock asks Rory to buy some gold and jewels off him and asks what his best price is. Rory responds by telling him to take a hike or he'll call the cops as he's not a fence for stolen goods.

Down at the doctors clinic, Bette is informed that a young man she brought in the night before has passed away... 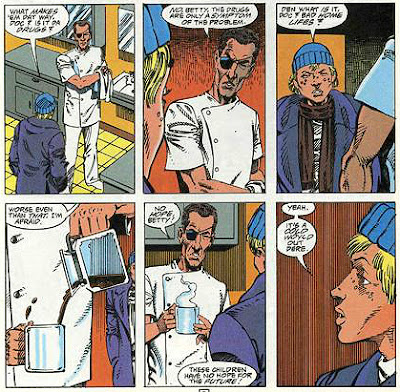 Meanwhile, the henchmen are setting about their task of setting up the Nats and the Mimes for a fall by luring them both to the same place later that evening for a weapons drop. In the midst of all of this, the Rabbi visits the grave of Rory's father to tell him he's looking out for Rory but he's afraid...to lose another.

Back at 'Rags N Tatters', Rory and the Rabbi are arguing about Rory going out as Ragman as Rory says it's snowing. Rory relents and says he'll go change, but the Rabbi says not to put on the suit, but to merely call it and it will come to him... 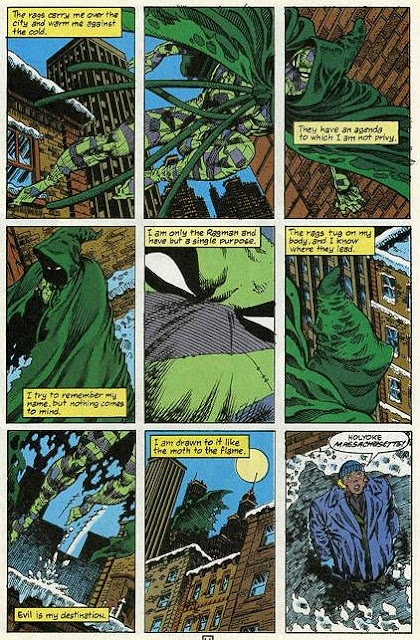 ...and Bette has now seen Ragman for the first time. A shadowy wraith flying over the rooftops of Gotham.

Now, at a local construction site, the Nats and the Mimes ambush one another in a brutal flash of gunfire. Members on both sides are going down. The death is viewed from above by Ragman as he thinks to himself, "The utter banality of what I am witnessing is the very essence of evil. Blind hatred. In the absence of reason, chaos prevails..." 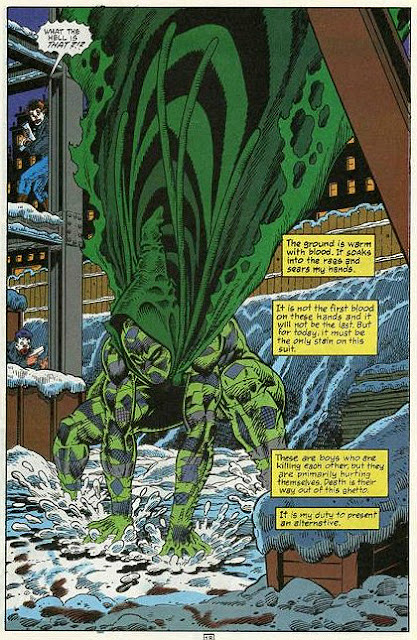 And with that, Ragman stands revealed not just to a scant few, but to the remaining members of two entire gangs.

Nats and Mimes alike being firing into the form of Ragman, but the bullets do nothing to harm the man in Rags before them. With the option of killing them put out of his mind, Rory opts for the one final "instinct" left for him to follow and he leaps atop a nearby crane...from the ground.

Back at 'Rags N Tatters' again, the Rabbi senses Rory's personal triumph and silently congratulates him for passing this test...a test that Rory's father...failed...

Back at big boss-man headquarters (come ON let's give him a name already!) the henchmen inform the boss of the arrival of the Ragman. Fully informed once again the boss orders another edict, "Find out what it is, where it operates from, and what it's objectives are! Then wipe it out!"

Finally, back in the alleys of Gotham... 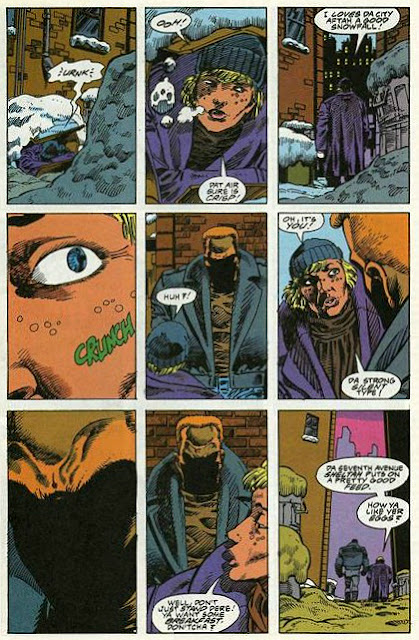 ...and we end with Rory finally getting some much needed sleep, only interrupted briefly to tell the Rabbi to buzz off, with the Rabbi muttering dejectedly into the night.

Whew, ok. So, as I've said before, the 9 panel layout of this series has always been a sore point with me. But Brodericks art really shines in this issue, especially with the title character. Despite having a face devoid of distinguishing features, Pat manages to put true expression on the "face" of Ragman with very few adjustments. And the splash page where Ragman drops in on the middle of the fight was gorgeous (though the colorization of the eyes bothers me a bit in this otherwise flawless panel).

Story-wise I DO feel as if the plot is dragging just a TAD slower than I'd like. I agree that the drama and suspense is being built up, but I'd rather see more action, less set-up. But hey, I know where this is going so I suppose these types of critiques aren't valid when the issue has been out for years and you're just anxious to get to the parts you REALLY loved. 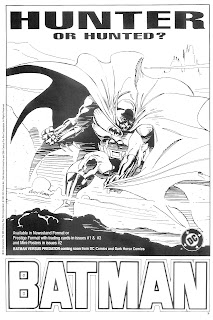 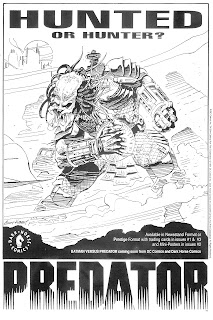 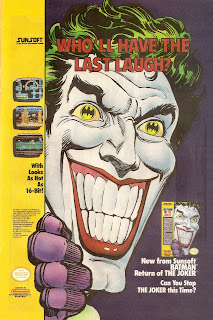 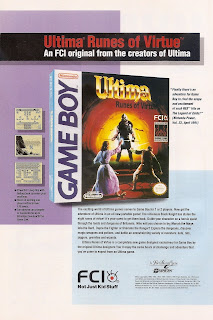 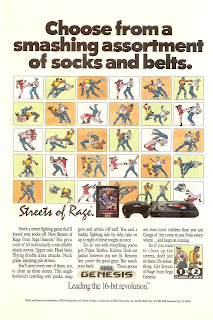 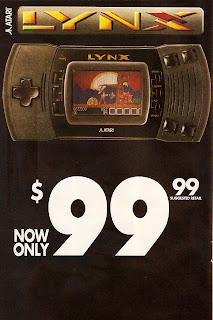 Hmm, never read Batman/Predator. Not much of a Predator guy though so I suppose it's no big loss. Did any of these 90's Alien, Predator, etc. crossovers ever actually become crowning moments in comics? Let me know in the comments below.

As for the games, I've never played any of them, though the 'Return of the Joker' one looks like fun... 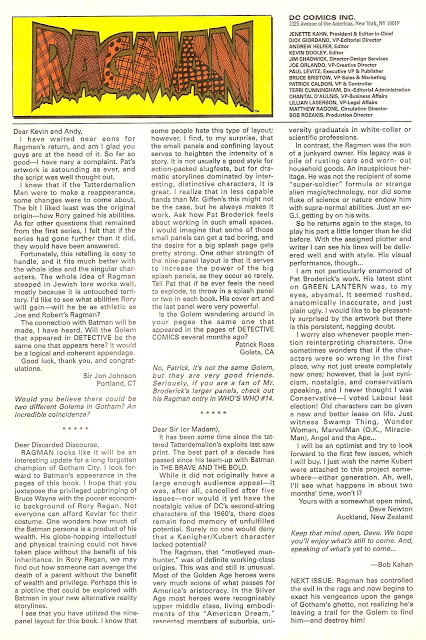 As eluded to by one of the fans, it seems I'm not the only one with a distaste for the 9 panel layout. But again, such a minor quibble as it's not a fault of the artist, but of the times. The distaste for Pat Broderick as an artist mentioned by one of the fans caught me off guard though. I mean, Broderick isn't my NUMBER ONE favorite artist and he was far from flawless, but I'd never refer to it as abysmal. But hey, art is subjective I suppose. For my money, Broderick is an acquired taste that is only helped by my penchant for characters like Firestorm, Green Lantern and (of course) Ragman.

But that's it for this issue folks! See you back soon for issue #5!!! In the meantime, be CERTAIN to leave a comment with YOUR thoughts on the issue, the series, the character as a whole and more BELOW!!!
Posted by Chad Bokelman at 3:55 PM No comments: