Dragon Con has come and gone folks, and the biggest cosplay convention of the year did not disappoint for many people. Including us here at the Ragman Blog! My friend Dan texted me a few images of a Ragman cosplayer spotted at this year's proceedings! 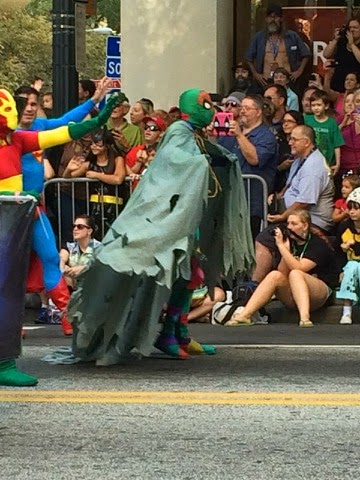 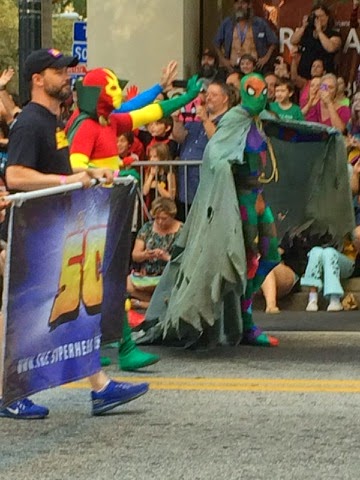 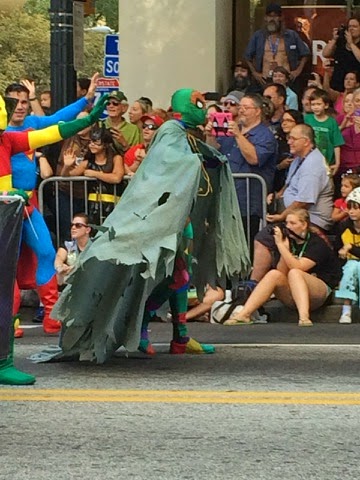 As of this posting, not much is known about this mysterious cosplayer. I've no idea who he (or she) is and thus am unable to give proper credit where credit is definitely due! If anyone knows who this is, or how I can contact them, don't hesitate to reach out to me! All I DO know for certain is that this is not the first time Ragman has appeared at Dragon Con! The following image is from the 2013 convention... 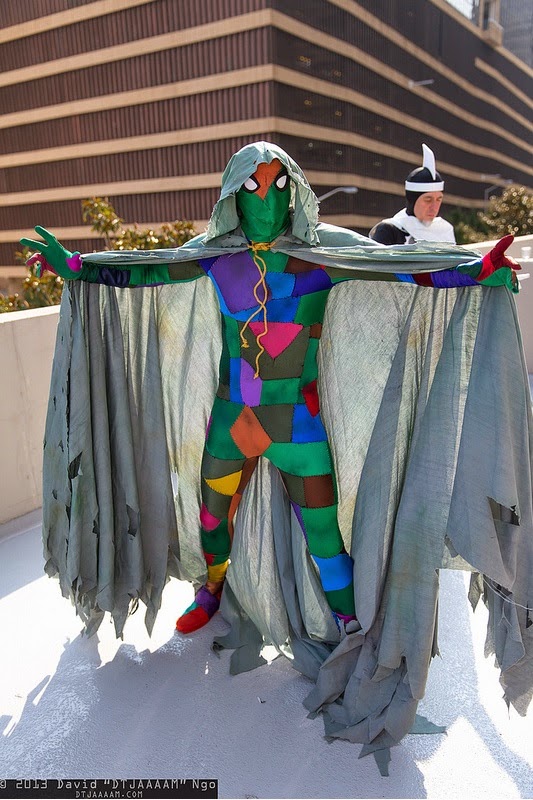 Fantastic work indeed. Mad props go out to this cosplayer, whomever they may be, for doing such a fine job of representing our favorite tatterdemalion! You must be a true fan! Also, my friend and fellow podcaster/blogger Shag shot me a link to the following video on Facebook where we get a brief look at Rags in action! So thanks to Dan and Shag for being my eyes and ears out at Dragon Con! Hope everyone had fun! Don't forget to comment!!!

Post by Kelly Miears.
Posted by Chad Bokelman at 9:20 AM No comments: 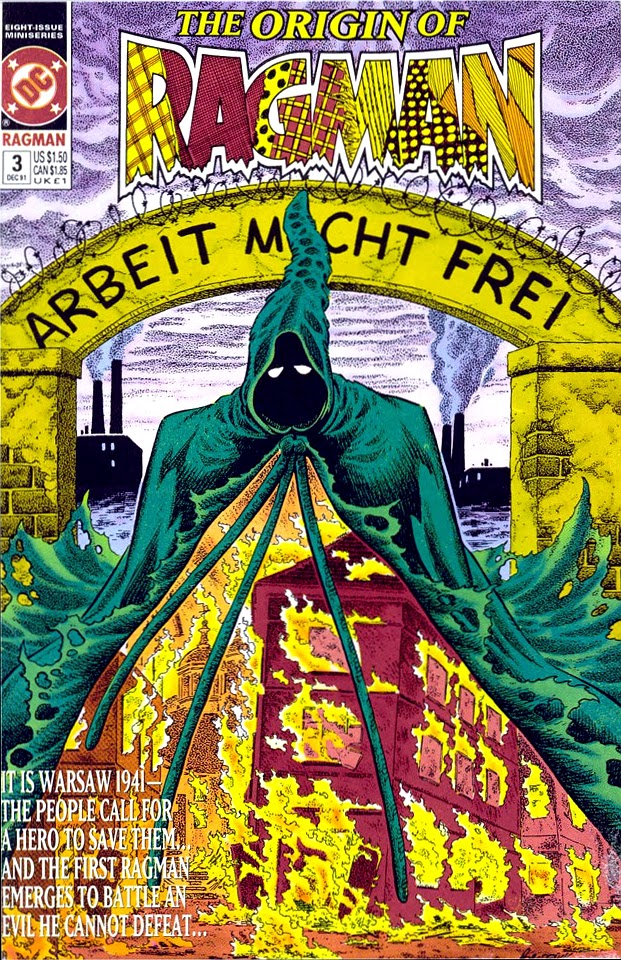 Back a week later folks and it's time to review issue #3! Now a couple of caveats before we get started:

1) This particular entry is going to have ALOT more images from the actual issue than usual. That's because this issue highlights the ORIGIN of Ragman as it relates to the Suit of Souls concept. This is huge stuff in terms of Ragman history and I don't want to miss a thing. So every panel from the history/flashback stuff will be on display here. To properly read ANY image, DON'T FORGET TO CLICK ON IT TO ENLARGE!

2) The origin of Ragman is steeped heavily not JUST in Jewish folklore (The Legend of the Golem) but also in WWII. It can be a sore subject for some, regardless of how it's portrayed. Fair warning.

3) I'm aiming to get a post up every week. Trying to post the same DAY every week though will prove impossible due to my work schedule (and erratic flow of business) mucking things up. But look out for a post once a week!

Now, into the review! As I stated, this issue covers, by and large, the origin of Ragman. So let's get started.

We pick up where we left off, Rory is entertaining his surprise guest, the Rabbi from last issue. As they speak over tea, the Rabbi makes a snide remark about Rory's middle name being "killer" as he has killed four people since donning the suit. He reveals that he knows this because Aunt Mabel has evidently become quite the chatty Cathy since being absorbed into the suit. Rory maintains that Mabel is only in a vegetative state while the Rabbi reveals that she is most certainly dead...and "that suit is ALIVE!" Rory demands to know what the Rabbi wants of him and the Rabbi re-iterates that Rory is to be his apprentice...the same as his father before him. The mention of his father quiets a stunned Rory as he settles in to listen to the tale of the Ragman from the Rabbi... 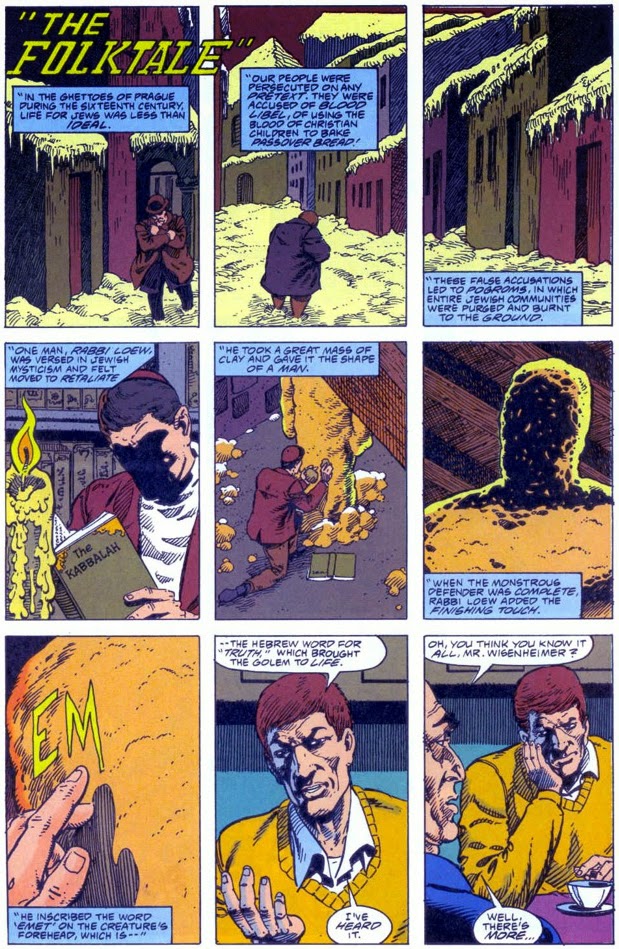 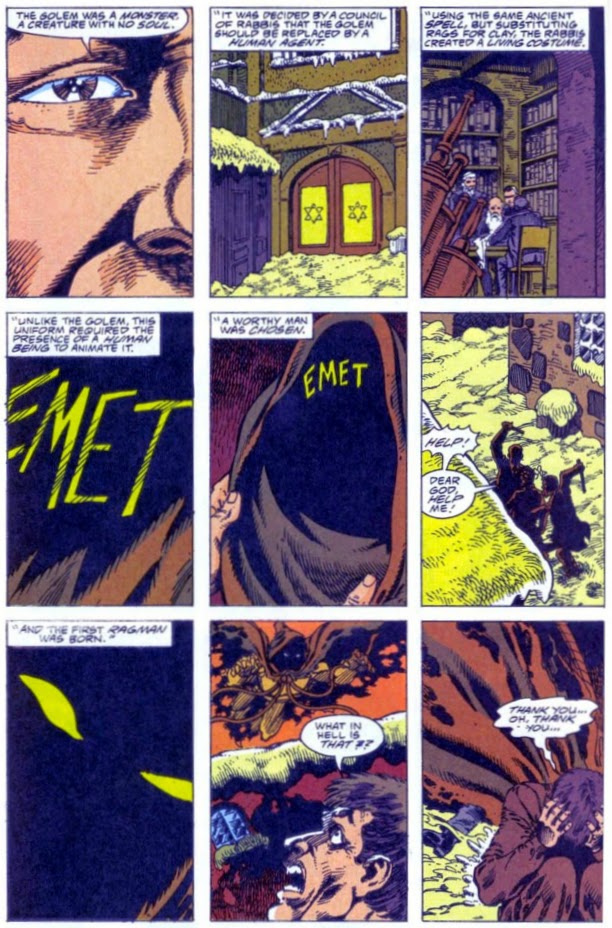 It's at this point that Rory interrupts, maintaining that the story is essentially poppycock. This angers the Rabbi and he jams the suit in Rory's face. He screams, "Five people are dead! Do you find that RIDICULOUS?! Because I do! I find it ridiculous that anyone so unworthy would dare put on a suit comprised of the souls of the dead!" He dares Rory to listen to the torment in the voices of the souls in the suit but before he can, the Rabbi suggests one soul in particular... 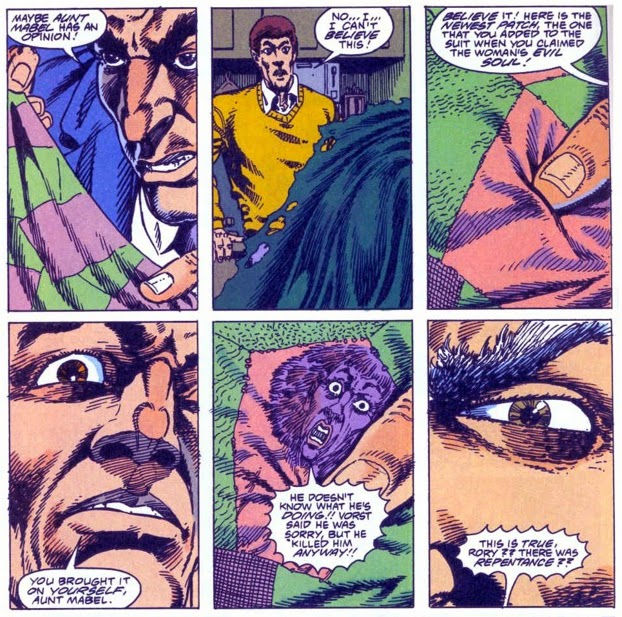 Rory then vomits into the kitchen sink and the Rabbi, disgusted, goes to pick up a framed picture of Rory's father. Wondering aloud what happened to him, the Rabbi calls him 'Jerzy Reganiewicz' and an indignant and ignorant Rory insists that his fathers name was Gerry Regan. The Rabbi scoffs, saying that isn't a name fit for jews. Rory says it was good enough for his father and the Rabbi blames himself for that, after all, he was with him May 15th, 1943 in the Warsaw Ghetto before they were separated! 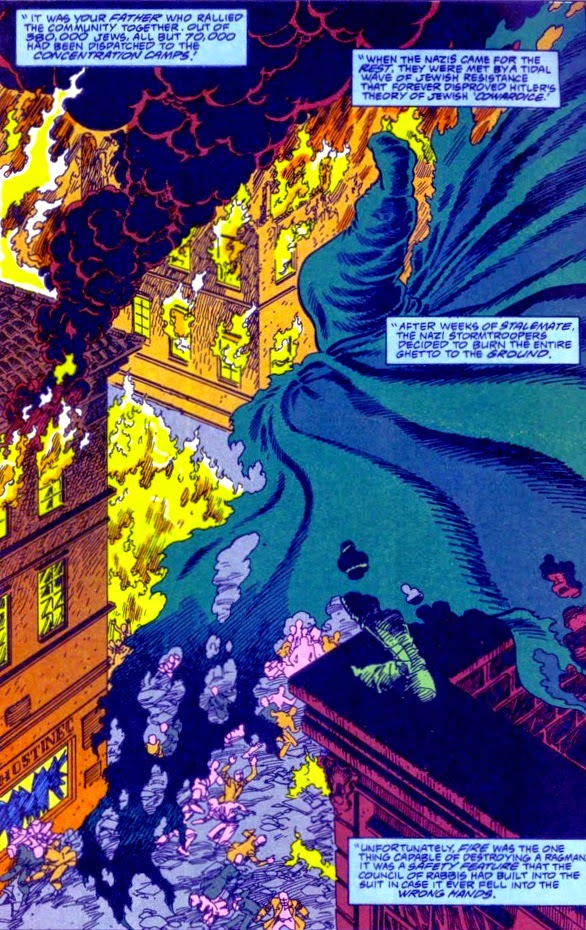 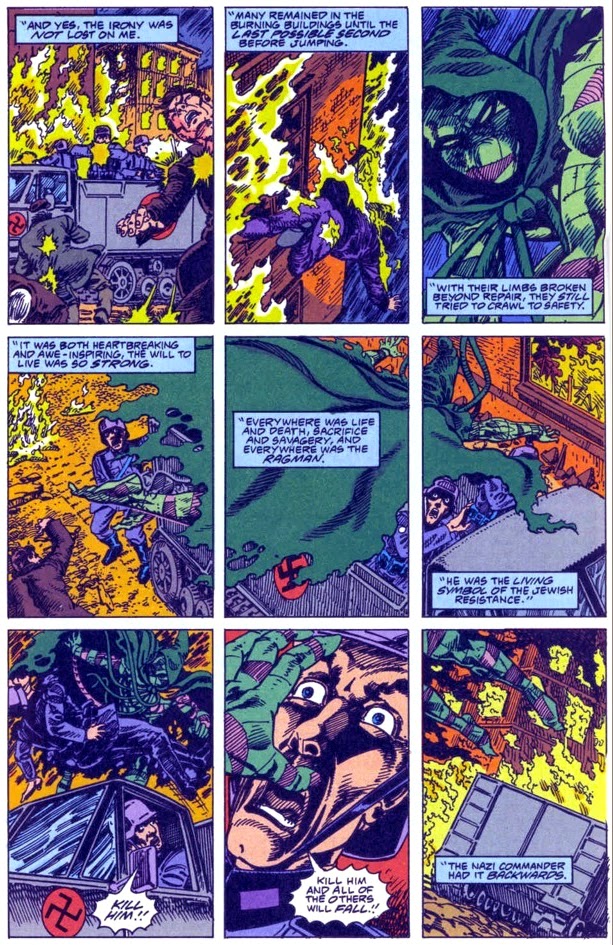 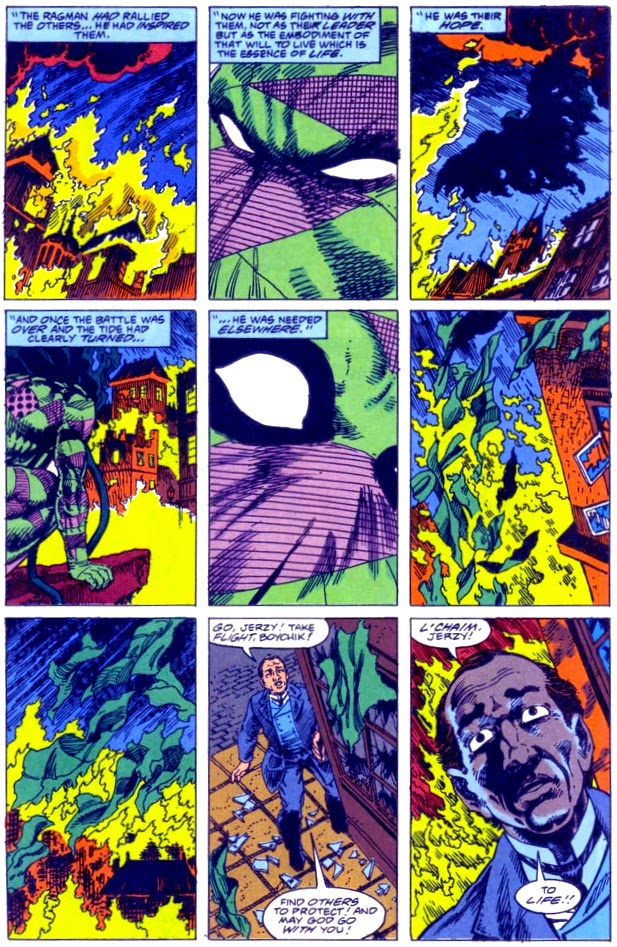 Rory, still in disbelief, asks if his father ran away. The Rabbi turns away and says no, that it was the suits safety feature of having an aversion to fire. He then states, "It is a Ragman's duty to protect his people and to inspire hope...but there was no hope left in that place." 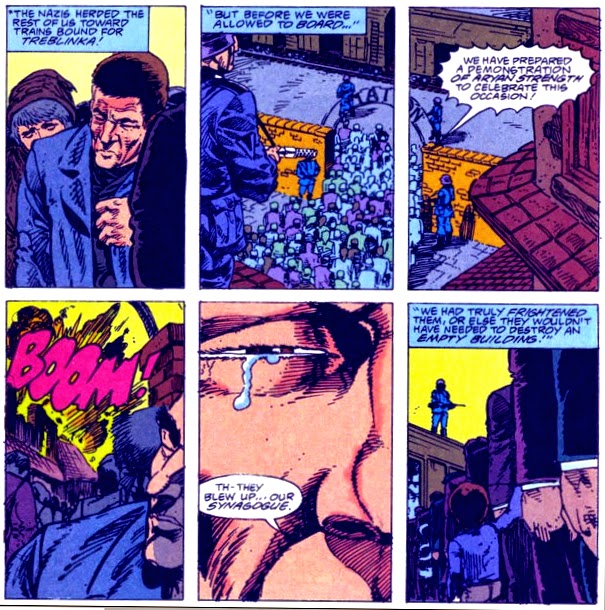 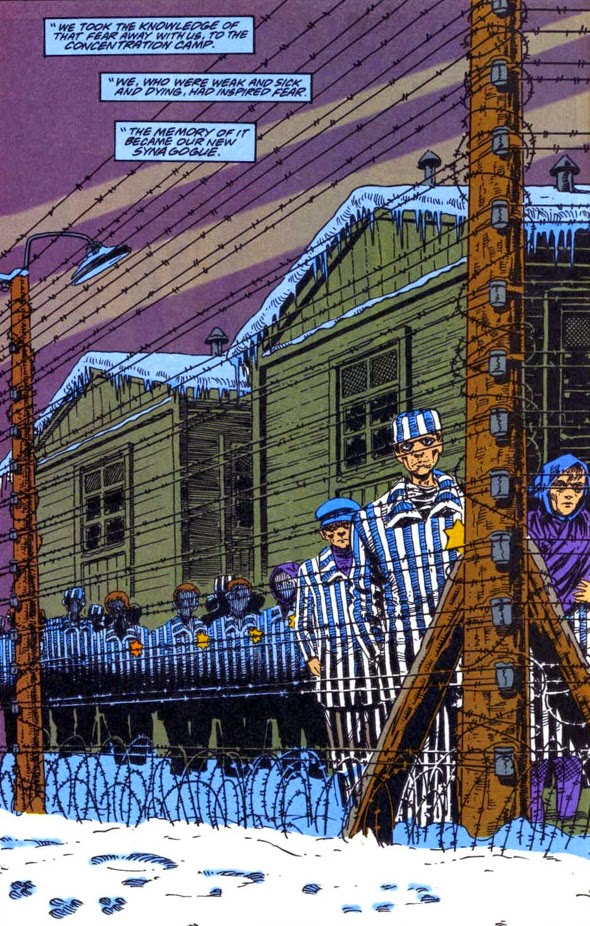 Rory asks if he ever heard from his father again. The Rabbi replies that he never did and his father must have assumed him dead. He even goes so far to say that, if Rory hadn't put on the suit in the first place, he wouldn't be there now. This reinforces the connection between the suit and the Rabbi.

As the two start turning in for the night, Rory offers to make up a bed. The Rabbi states he will sleep in Rory's bed and that Rory should get used to sleeping in his fathers bed. Rory exclaims that his father died in that bed and the Rabbi replies, "I know that Rory. Do YOU wish to die in bed?"

Later that night, the Rabbi wakes Rory from a sound sleep and casually mentions that he raised another Golem and that it was on it's way to kill him now because, "It seemed like a good idea at the time." 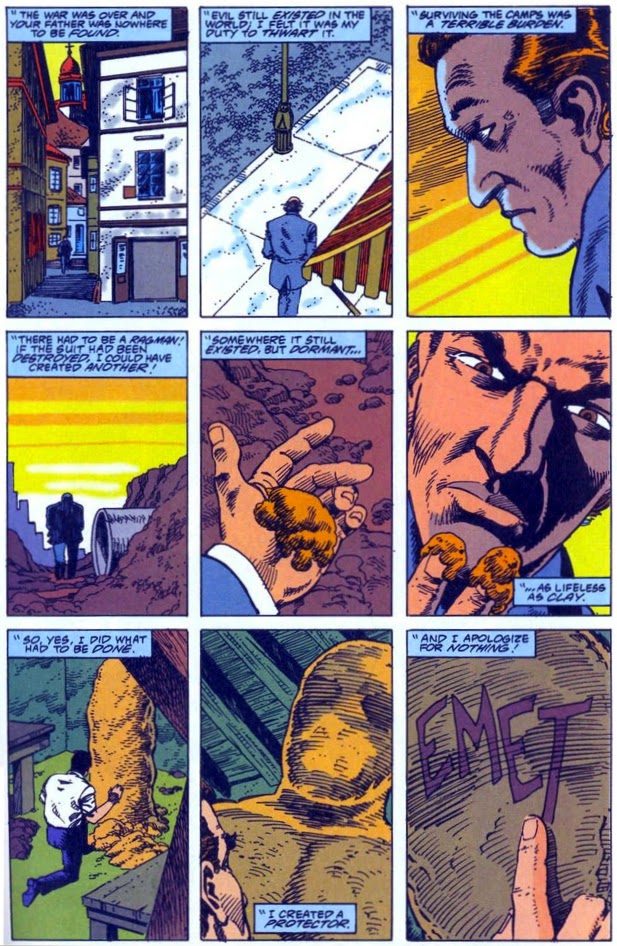 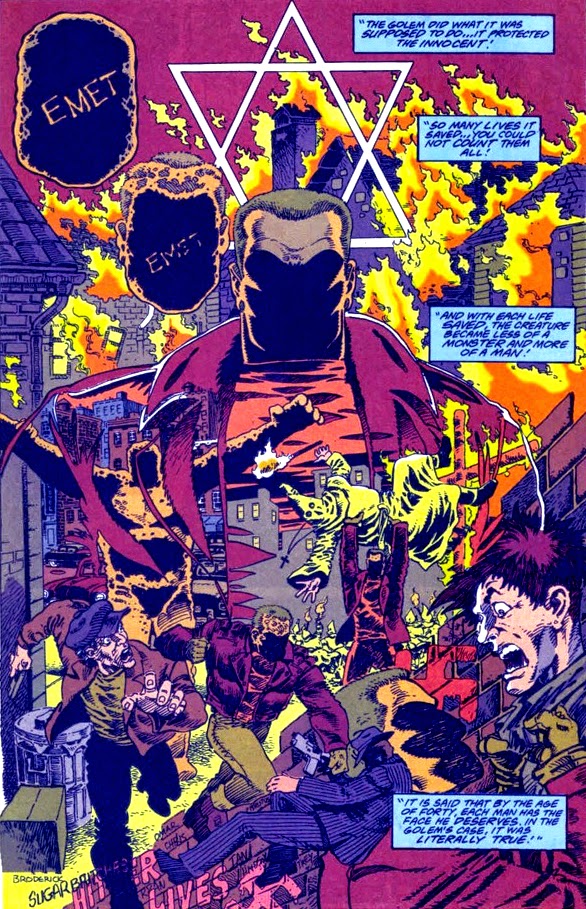 The Rabbi says that the Golem is on it's way to kill Rory because it's been around too long and is afraid of being replaced. He suggests Rory get some sleep because his training will begin tomorrow and the Golem will be only the first of the monsters Rory will face.

Cut to a dark and snowy alleyway where an unfortunate dope dealer runs into the Golem. Exit with the Golem quietly crushing both dope and dope dealers skull.

Cut to businessman from previous issue finally being informed of the deaths of his crew (Vorst and the like). He discovers a stray Rag on his model of the section of the city (the slums inhabited by Rory and CO.) he wants to control. Exit scene.

Cut back to Rags N Tatters as Rory is having another Vietnam dream. He dreams of himself carrying others through the war, refusing to give up. In the dream he stumbles across the Golem and asks for help to save him. The Golem says it's up to Rory and always has been. Rory shouts that he never wanted to be a leader and even actively tried to put himself couldn't but never could. He realizes in the dream that he always has been the Ragman. He awakens to the realization and reflects on them momentarily before grabbing the suit and saying to a suddenly present Rabbi, "I'm ready Rabbi. Teach me what I need to know."

Heckuva issue. Really. While the art was consistent with the past two issues in terms of panel layout, I have to say, the splash pages by Broderick are ABSOLUTELY FANTASTIC. From Ragman in the flaming Ghetto to the heartbreaking concentration camp scene to the Golem history layout. Wow. Had to showcase those. THAT'S the Broderick I'm familiar with.

And the history of Ragman is WELL thought out. It's incredibly detailed and steeped in real world events and folktale. Fantastically done. I imagine most people adverse to the idea changed their minds by the time they got to this issue. 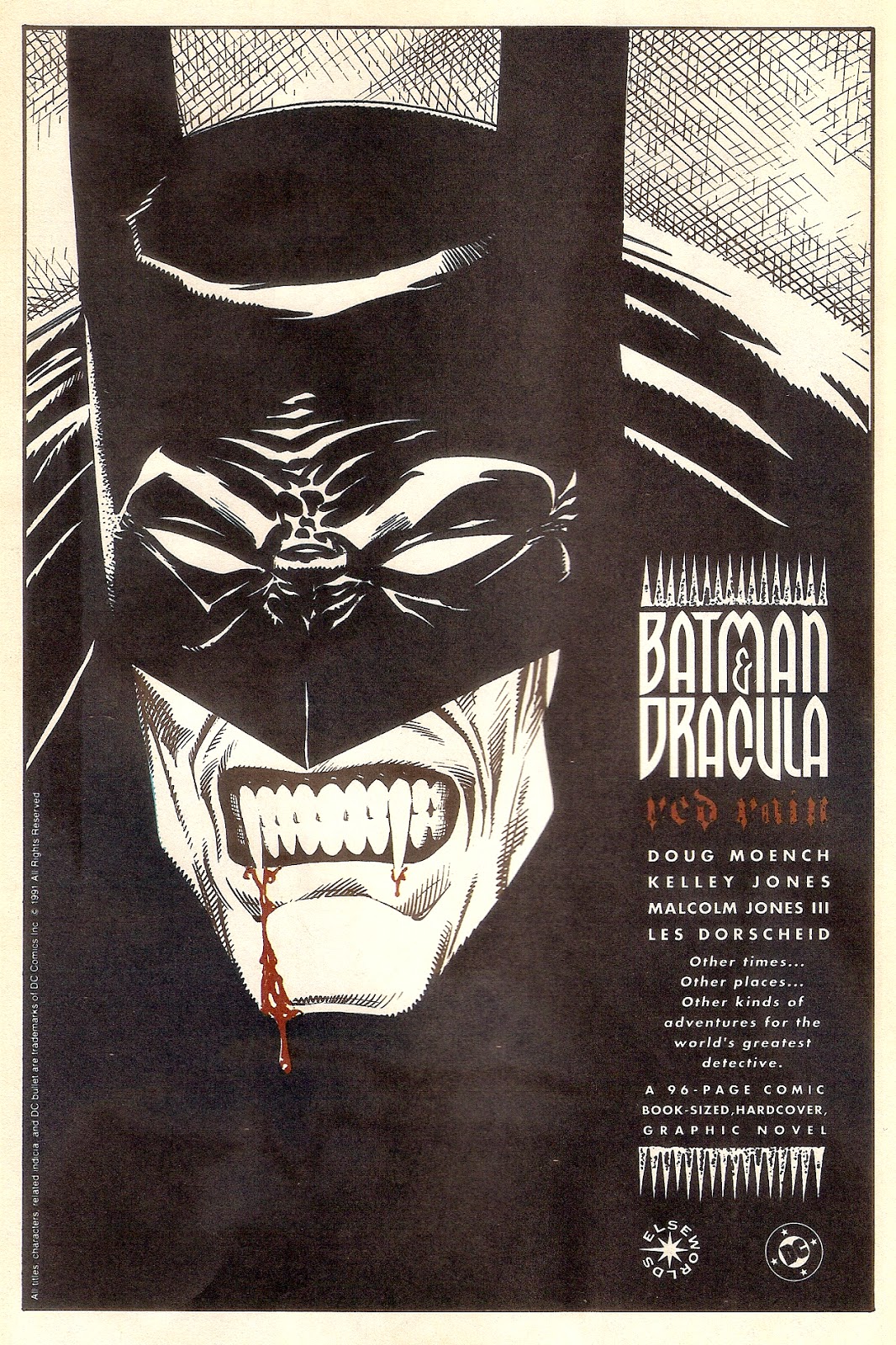 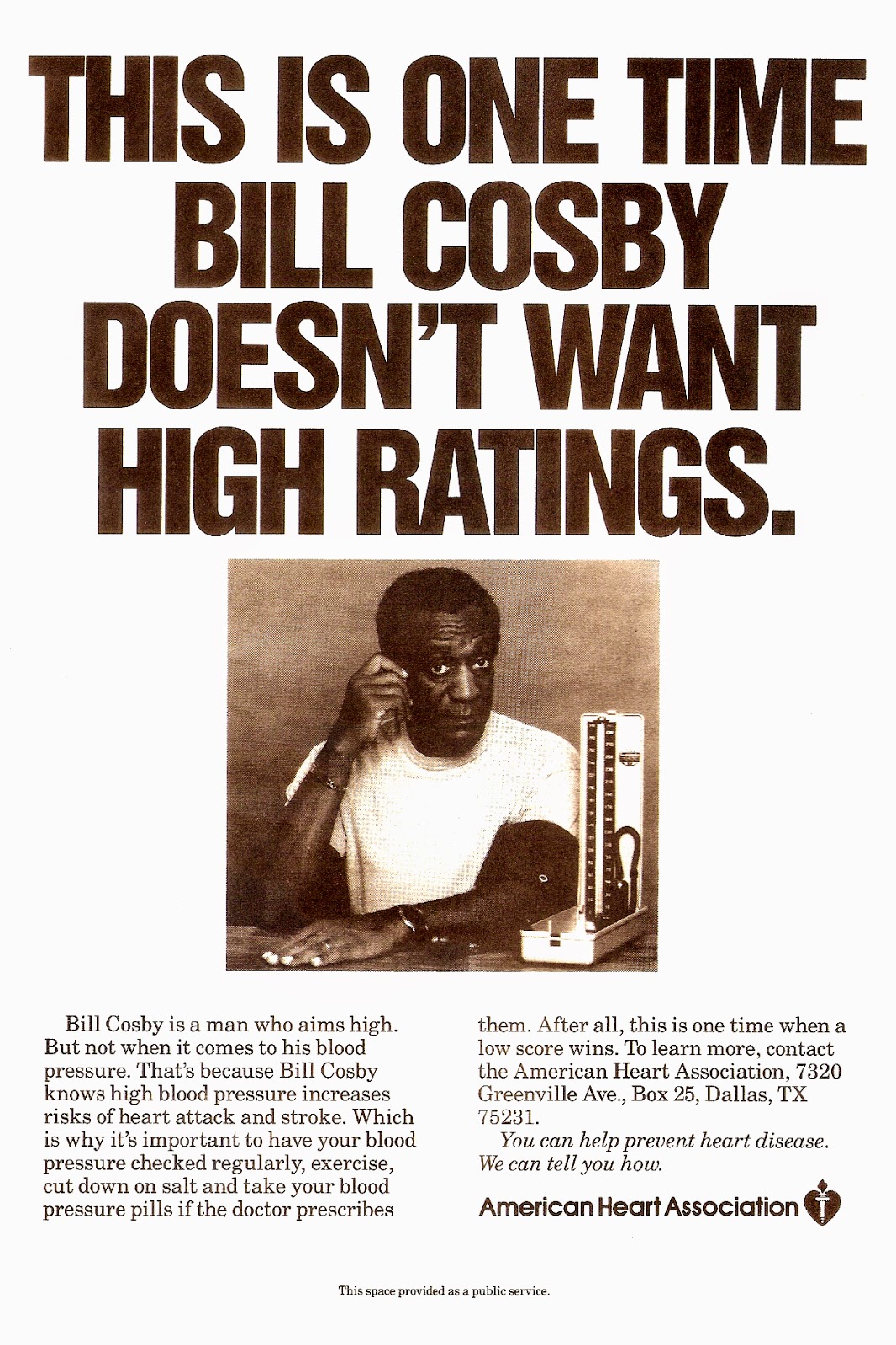 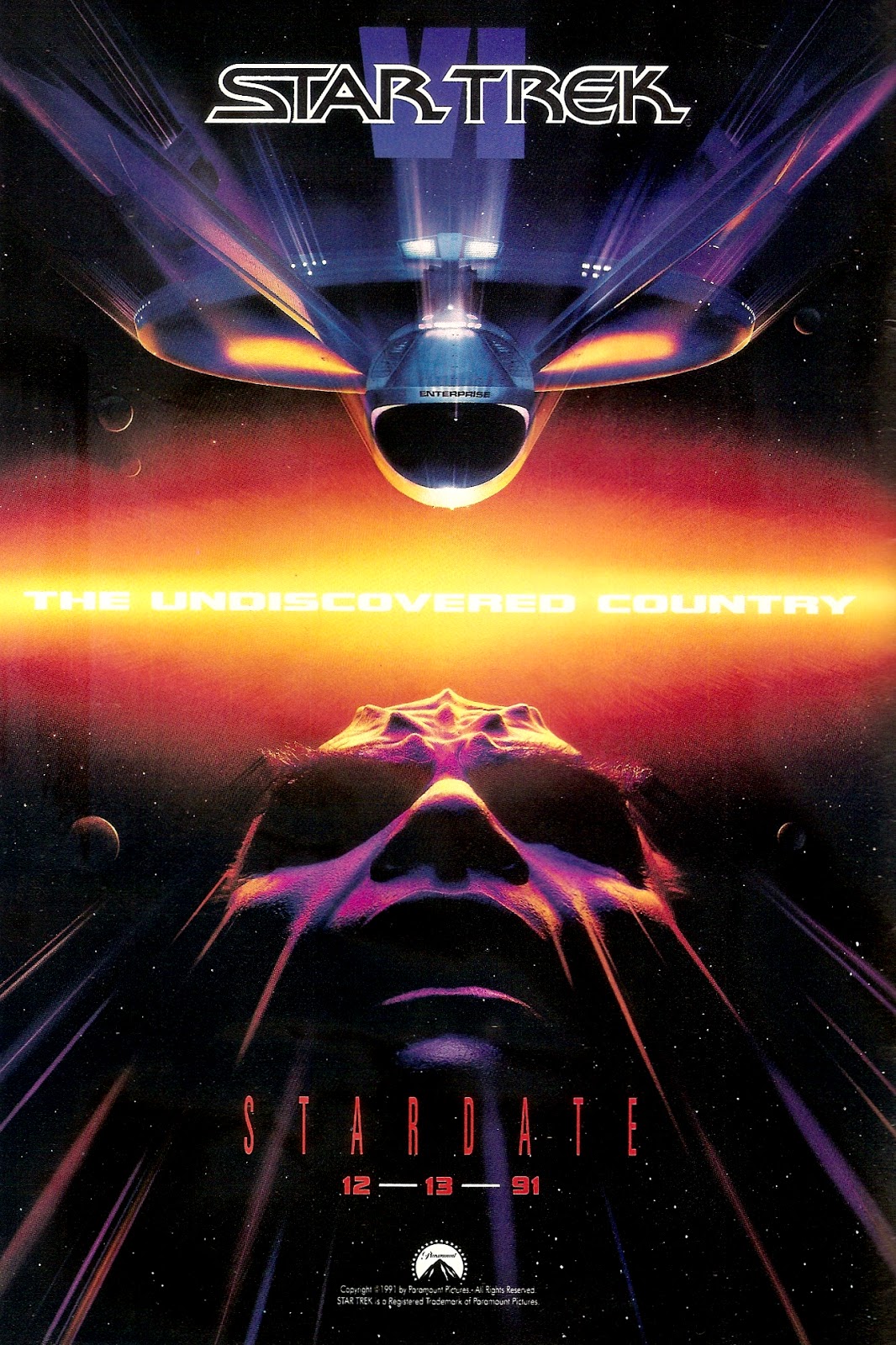 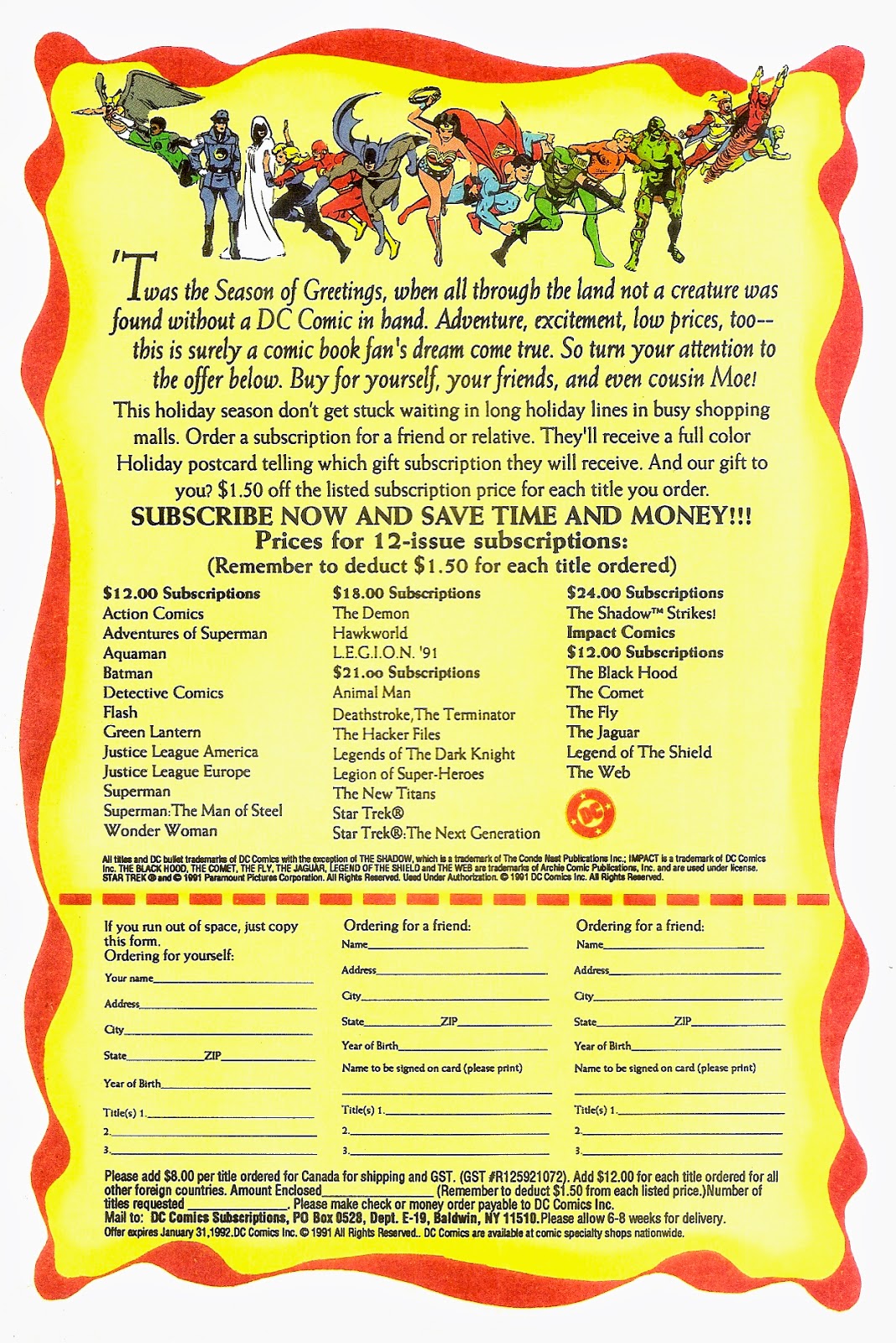 Last but certainly not least, we have the FIRST letters page for the new series! Check out the reaction to the "all new" Ragman! 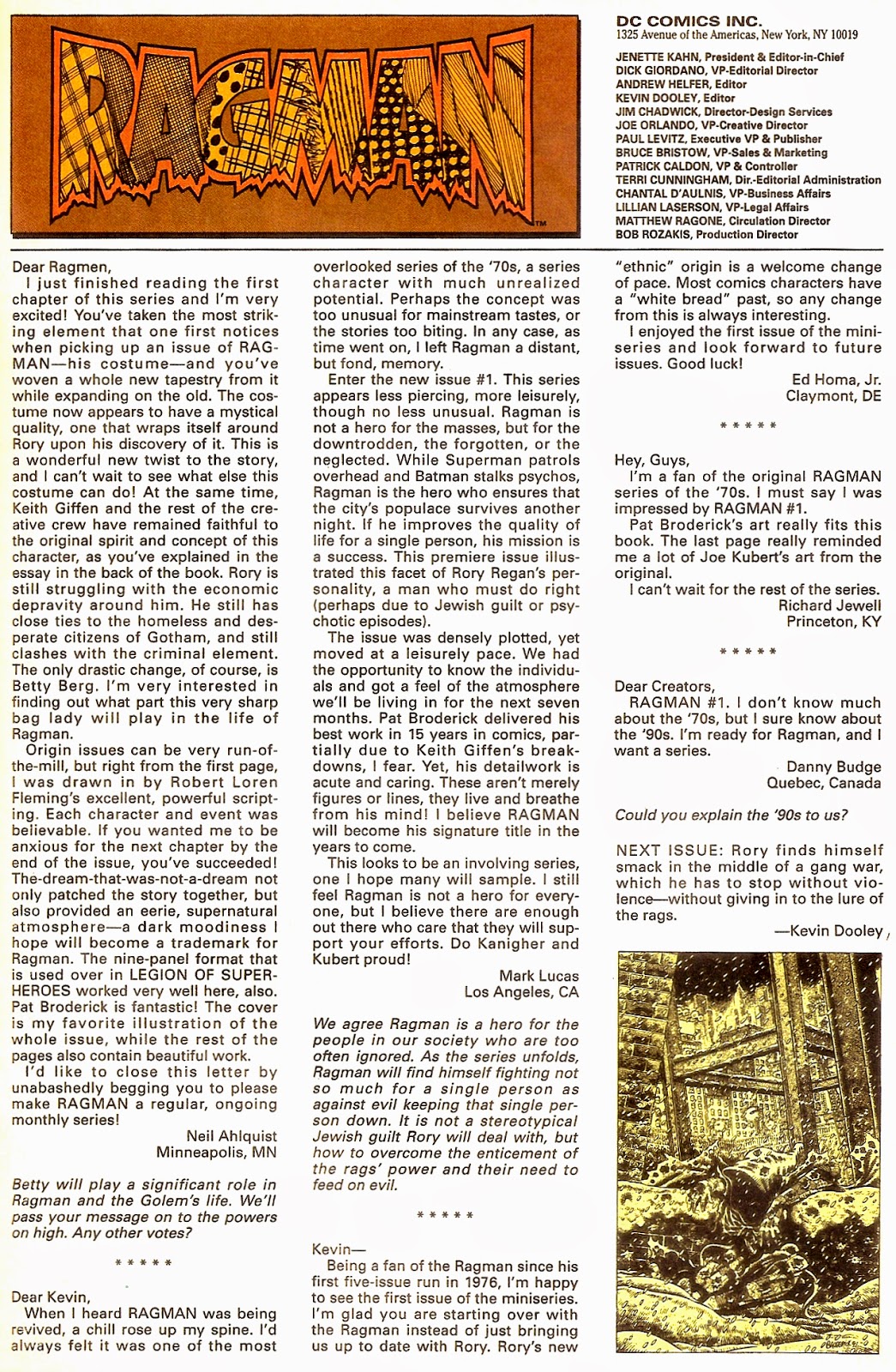 All accolades all the time it seems! Nothing but excitement for the return of DC's Tatterdemalion of Justice!

Til next time folks, don't forget to subscribe/follow the blog and MOST importantly leave your comments on the posts! Feedback is encouraged whether its agreement or dissent! I just want to hear YOUR thoughts, not be alone in my own! FANS OF RAGMAN UNITE!!!
Posted by Chad Bokelman at 2:40 PM No comments: