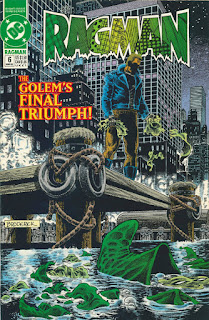 Welcome back Tatters! We return once more to the 1991 eight issue Ragman mini-series! This time around we're moving forward with issue number six. Plot and breakdowns by Keith Giffen, script by Robert Loren Fleming, art by Pat Broderick, colors by Anthony Tollin, letters by Albert DeGuzman, and edited by the team of Dooley and Helfer.

We open at Rags 'N' Tatters where we left off last issue with Bette confronting the Rabbi. After proclaiming that Rory is in danger, the Rabbi shakes it off. Bette reveals that she knows Rory is "dat rag guy" and that she seems to be the only one willing to help him. The Rabbi says that she shouldn't because "we who are merely human cannot interfere!" Bette retorts that there is nothing mere about being human and leaves Rags 'N' Tatters. The Rabbi thinks to himself, "She is a good woman, but she has never known the horrors of Treblinka!" as Bette thinks to herself, "He's an okay guy, but he never lived on da streets!"

Cut back to the showdown of the century between the Golem and Rory! 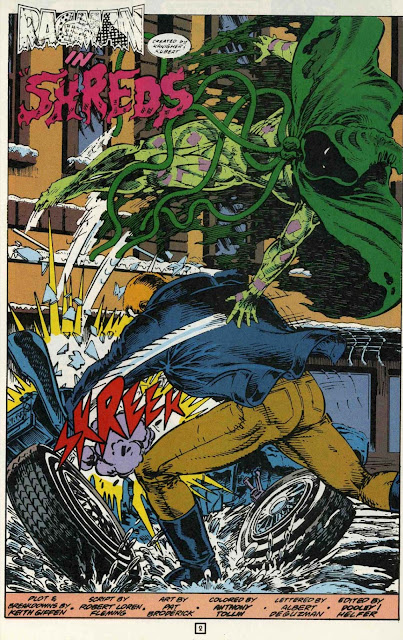 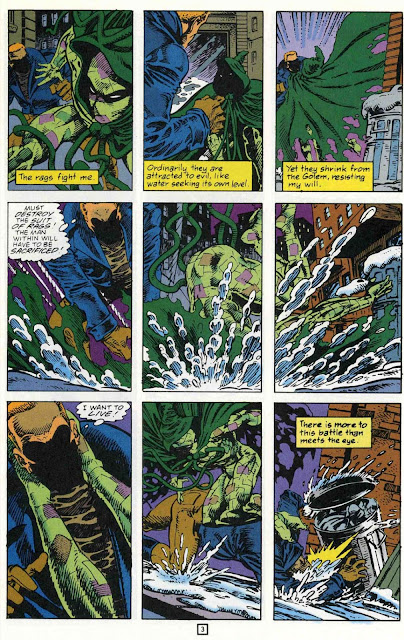 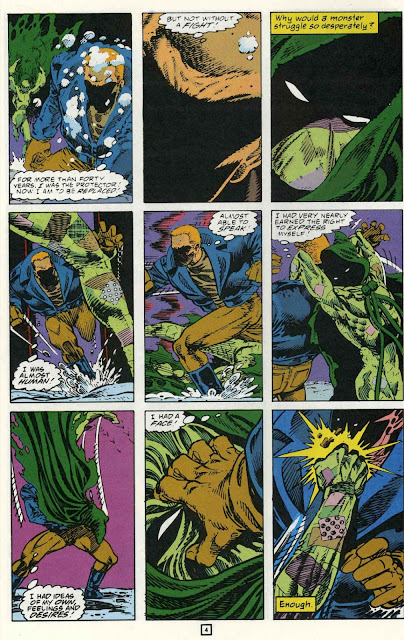 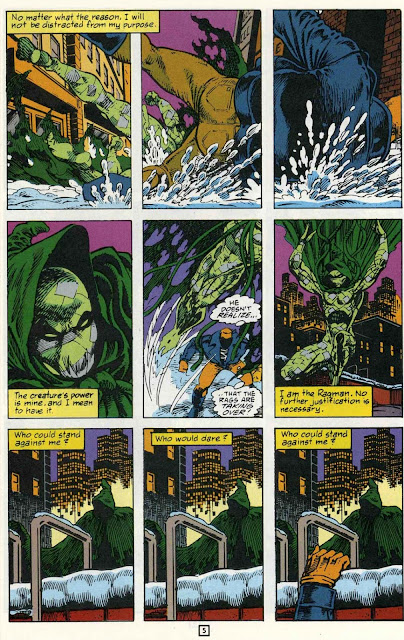 Meanwhile, one of the big bosses henchmen from issue #4 (let's call him Sneezy) is approached by the leader of the Nats. Confused, Sneezy asks whats going on and is introduced by the Nat to the leader of the Mimes who guns him down. The two drag the body off into the snow to search him for an ID. Finding none, the two set off in search of the other henchman "the fat guy". The two gangs have teamed up in order to seek out who has been pitting them against one another.

Elsewhere, Bette stumbles across the wreckage left in the wake of the confrontation between the Golem and the Ragman. Noticing clay on the wreckage, Bette reveals (via internal monologue) that she knew "bud" was falling apart. She senses it's a battle to the death and that, "Rory's bein' tested an' he's failin' bad!"

Then we rejoin the fight between the two Jewish folklore combatants... 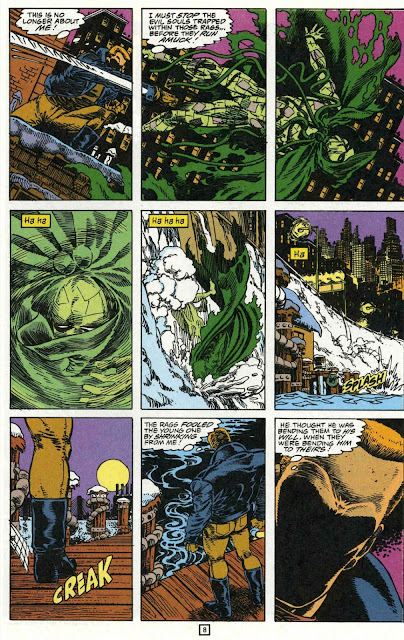 ...suddenly Ragman leaps from the bay and tugs the Golem down into the inky black water. Both resurface as the Golem realizes that it's up to him to help restore Rory's control of the suit no matter the cost. Rory, or rather the suit itself at this point it seems, sneaks off into the shadows to confront the Golem because "no tactic is too dirty. Survival is everything. May the best monster win."

Back at Rags 'N' Tatters the Rabbi laments to himself that he should have warned Rory about the danger involved in the final test. That "in fighting the Golem, you fight yourself. Perceive him as a monster and the monster will be you!" The Rabbi then cries to himself silently.

As we switch back over to the fight... 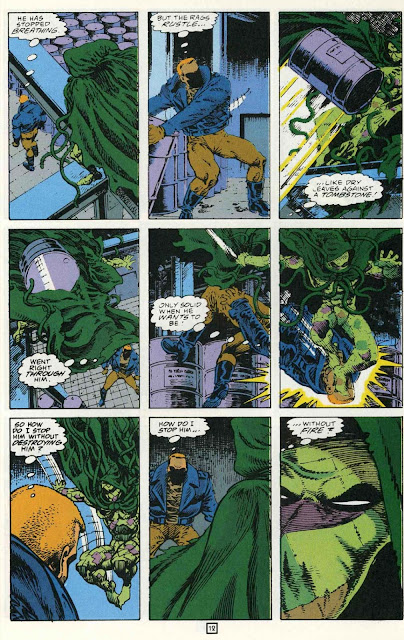 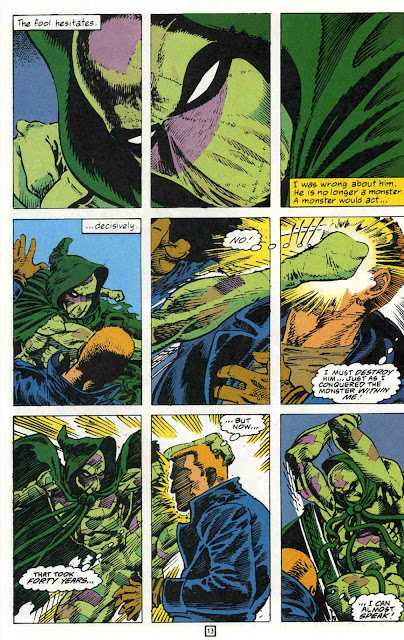 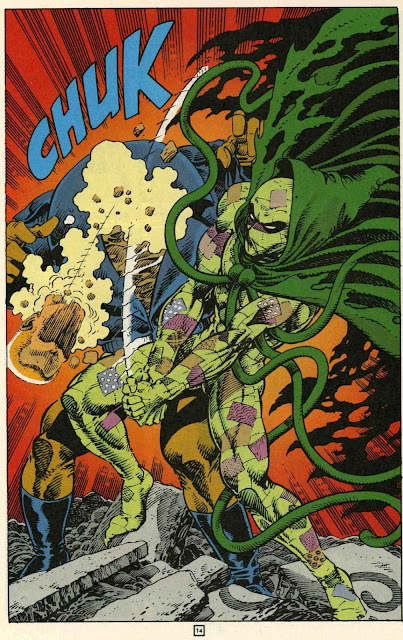 And as the Golem's head goes bouncing into the darkness, Rory gains control long enough to realize that he must erase the 'Emet' (the Hebrew word for truth) from the Golem's head to defeat him. This proves to not be as easy as he thinks though as the Golem's decapitated body continues to fight the Ragman. It's at this point Bette stumbles across the fight and collects the head of the Golem into her hands. She speaks softly to his head that the fight is over and that Rory NEEDS the good within the Golem to overcome and fight the Rags off once and for all. Tears in her eyes she erases the word 'Emet' from his face and the Golem collapses into dust and clay, uttering his first and final words, "Betty, I love youuuuu." Rory has finally come to his senses and leaps off into the night as Bette says that he shouldn't forget that someone gave up everything for him tonight because she never will.

And as Rory takes off into the night... 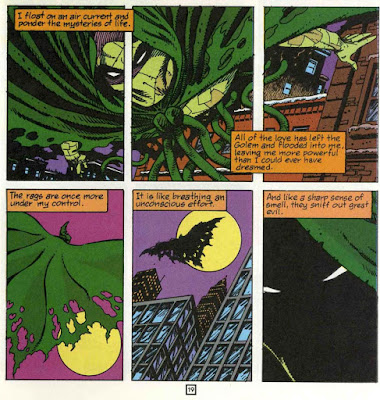 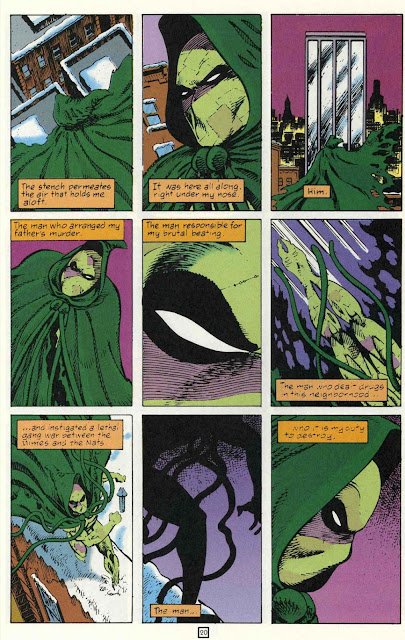 The next morning at Rags 'N' Tatters the Rabbi awakens worried for Rory. Slowly he approaches Rory's room and sees, thankfully, that Rory is alive and asleep. Later that day Rory awakens to night falling. He gives the Rabbi a hard time saying that he has a store to run and he should have woken him up earlier. Bette, seated at the dinner table with the Rabbi states that she ran the store while he slept. When Rory is dressed, he steps out to confront Bette about her knowledge of him being the Ragman and her expressed desire to run Rags 'N' Tatters while Rory does his thing as a hero. Rory is concerned about this being no kind of life as a 'nocturnal creature'. The Rabbi retorts that he's finished his final test and that he is welcome to do as he wants now.

But across town, in the spot where the Golem finally fell... 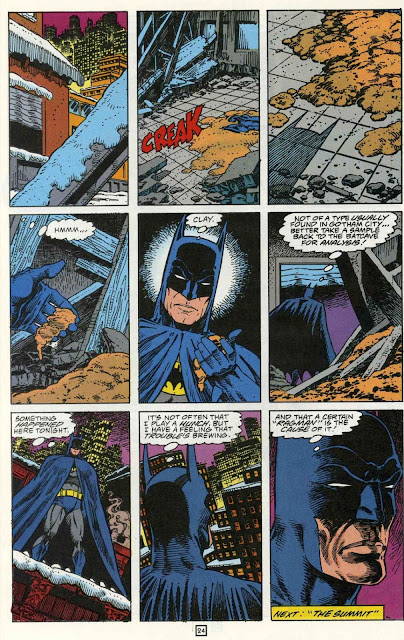 And with that, issue 6 ends.

As you notice, I probably provided more pages than I normally do. It seemed necessary for this confrontation. So many panels featuring great Broderick Ragman art, I just had to showcase it.

I like that the Rags took Rory over. That, with the Golem, the Rags are a curse and a burden that's extremely hard to contain. As the Golem developed a consciousness and a morality, it gave the power a benevolent presence that Rory needed to be passed on to him to fully become the hero he needs to be.

It was confusing at times whether the Golem was fighting for himself or for the sanity and goodness of Rory himself. It seems the idea is that he was fighting for BOTH. That his sense of morality couldn't deny the soul of the man within the Rags. Made for a kind of, as I said last post, a poetry to this fight. Not a climactic final confrontation between good and evil, but a passing of the torch instead. One that had to be EARNED by Rory.

I'm glad we're nearing the end. Rory being given the full power and control of the suit will make for interesting moral questions when he is confronted by Batman later on.

Now onto the ads! 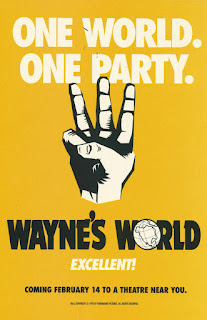 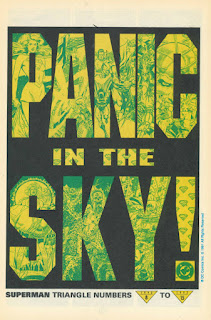 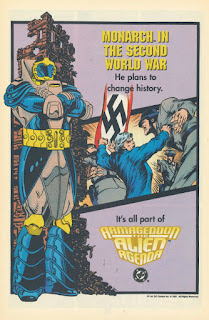 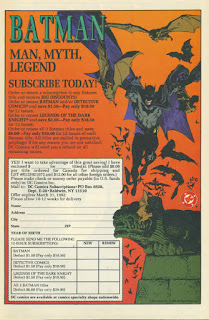 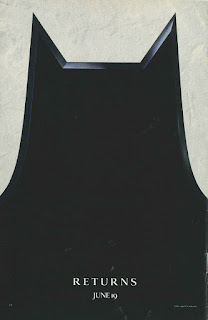 Ah Wayne's World, how we love thee. And that Monarch ad is like the third or fourth I've come across. Unfortunately for the back issue bins, I still have no interest. On the other hand, 'Panic in the Sky' looks pretty interesting actually. For more information on it, I recommend checking out fellow blogger and podcaster Michael Bailey's post over on the 'Fortress of Baileytude' by CLICKING HERE! Bailey is my go-to Superman expert so I defer to him on matters related to the Man of Steel and the Maiden of Might. Seems like a fun story-line though! 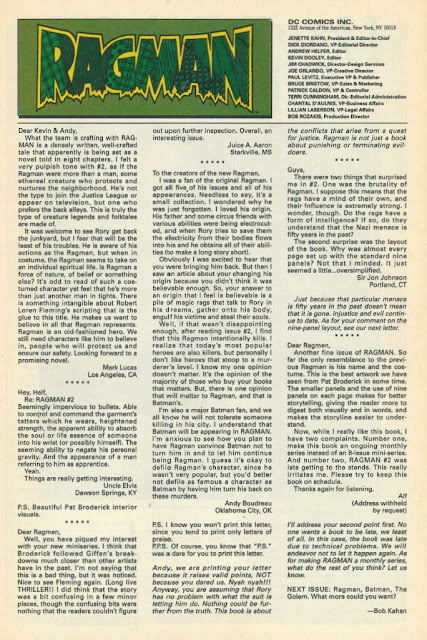 It seems the question of who is in control of the suit is being picked up on by the readers real time. That's good. I was actually a tad concerned that some people might think RORY is the one doing the killing while in the suit. And the concern over the status of Ragman from hero to killer in this re-imagining brought about a valid concern when it comes to Batman's knowledge of him operating in his city. An inevitable confrontation that we'll see come to a head towards the end of the series.

Well that's all for now! See you guys next time! In the meantime, PLEASE don't forget to comment on these posts as we go! I love getting feedback from you guys. There's not alot of us out there, so the more I hear from you the better!
Posted by Chad Bokelman at 11:49 AM