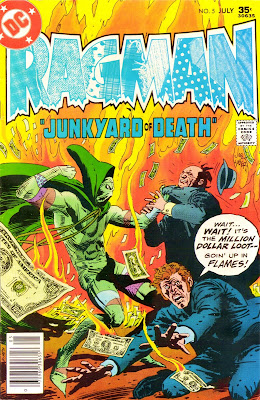 How goes it fans of the Ragman? I'm back (if only slightly late) for the review of Ragman #5 from 1977, the final issue of the original DC Ragman series by Robert Kanigher, Joe Kubert and the Redondo Studio. One interesting note however, is that Joe Kubert himself did the art for this entire issue and NOT the Redondo Studio. I'm not quite sure why, but hey, I credit them anyways because of their involvement with the series up until this point.

One would think that, with a final issue for a character this dear to me, I would have a lot to say on the end of the 1970's pre-crisis Ragman series. It's true, I do. But considering the content in this issue, it's only fair that I devote the proper amount of time necessary to the story and content itself. The next post will be a Ragman retrospective looking back on the original series and the reasons for it's cancellation as well as a few other things. So, on with the show!

First and foremost we have to take a look at the gorgeous Kubert cover. Take a moment to appreciate that cover ladies and gentlemen. Ragman, champion of the poor and downtrodden (in both his civilian identity and his super-heroic one) beating the living snot out of some thugs while millions of dollars goes up in flames all around him. Does Rory stop to save a pile of cash for himself? No. His eyes are focused on the task at hand, delivering justice to those who would harm innocents. So much said in such a simple cover. Beautiful.

Our story opens as it usually does, with a recap of Ragman's origins. The first page leads us right up to the moment where Rory's father and his friends get electrocuted and the page turn double spread dramatically lays out the remainder of Ragman's origins... 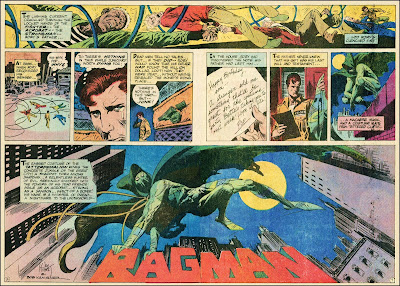 The story following the recap opens with Ragman attacking a group of thugs on a boat who have been responsible for creating "letter bombs" (they are what the name implys) and distributing them through the city. Ragman's lethal fists plunge into the thugs and one of them goes flying into the letters, setting them off as the boat explodes and sinks to the bottom of the river. 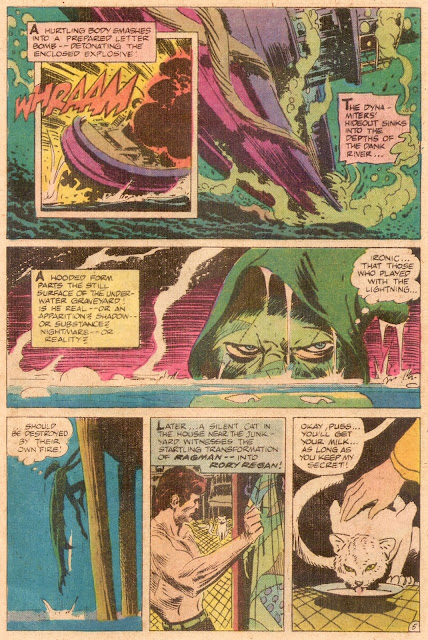 And so the beloved cat, the only character in this series privy to Rory's secret double life, makes another appearance. A silent narrator, watching from the shadows and telling the story with it's eyes.

But I'll stop channeling my inner Kanigher and get back to the review. The next day we open along with the Rags N' Tatters shop where we, for one final time, see Rory's kindness towards his fellow man by way of this little shop. 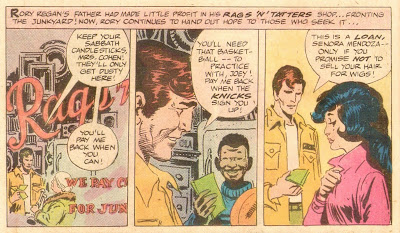 I have to say this is one of my favorite things about this series. They're always reiterating what a good man Rory is, but they're not beating you over the head with it.

As Rory tends to those inside his shop, a homeless man makes his way into the back lot of the junk store on this freezing winter day. He dislodges a few mattresses and covers up under them in a desperate attempt to stay warm.

Meanwhile, the crime boss is still attempting to retrieve the million dollars he just KNOWS is hidden withing the Rags N' Tatters back lot. Now here I have to stop and mention something. Back in the very first issue, and in the issues following, the monetary value of the "loot" stashed in the Rags N' Tatters back lot was always just over two million dollars. Suddenly, in this story, it's been reduced to just a million. It really has no bearing on the story, but it IS an interesting tidbit.

So, as the crime boss hires a man to retrieve his million (with the promise of 10%) the newly hired thug sends his own men out with a new plan: dispatch Ragman BEFORE making the attempt to nab the million. How? By kidnapping Opal and using her as bait.

Over at Rags N' Tatters, Rory finds the old man sleeping in the lot and hands him some cash to get a meal as Bette and Teddy show up. The old man randomly gives Teddy a good luck charm as Bette berates Rory for not marrying her. Although this time Bette isn't completely unlikeable as she also suggests that this would mean they could adopt Teddy as their own. Damn decent of her. 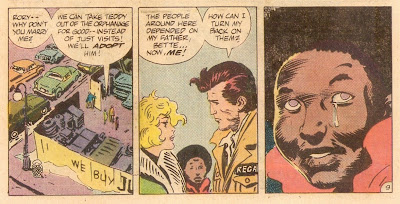 Later that night, the thugs snatch up Opal (that DELICIOUSLY gorgeous singer) and make for Rags N' Tatters. Suddenly Ragman appears in the street to confront the thugs and, being the dumb thugs they are, the decide to push the pedal to the floor and run him over...cause it's that easy. As they swerve to a stop to see if they missed him, they discover Ragman merely hopped onto the top of the car. 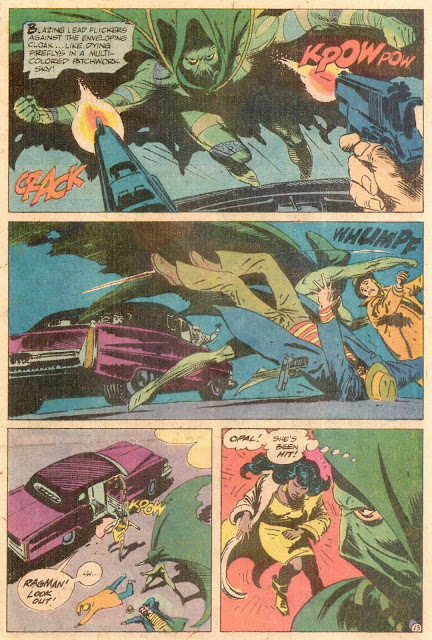 In all the chaos, Opal takes a bullet and as Ragman tends to her, the thugs try and make their getaway. In a feat of pure precision, Rory grabs the nearby gun of one of the thugs and hurls it through the air. It strikes the driver square on the temple and the car careens into a wall and bursts into flame. Rory takes Opal to the hospital as the sun rises.

Back over at Rags N' Tatters, Bette and Teddy have arrived to check in on Rory... 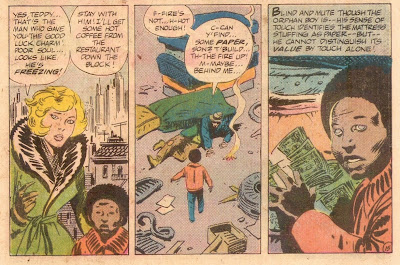 Teddy, being blind and unable to determine the difference between cash and paper, tosses the money into the flames to keep the old man warm. The original hired thug has given up on his crew and gone to search for the money himself when he discovers Teddy throwing the money into the flames. Desperately he reaches into the fire to make a grab for the cash and Ragman grabs him and escorts him off to the police station. Bette returns to a roaring fire and the camera cuts away to the only witness to the entire affair... 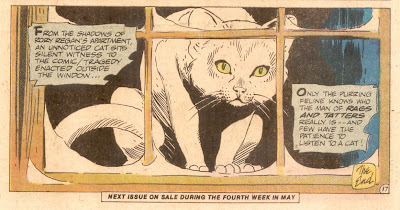 You know, DC had no idea that Ragman would be cancelled at this point. (or, more accurately, the creative team didn't) But it's fitting that the first outing of Ragman ended very tidily in a 5 issue mini-series style format...before the mini-series format was really even a "thing". It's even more fitting that the final issue was drawn entirely by the visual creator of the character! It's just a shame that it hasn't been collected in a trade paperback version.

Like I said, I'll save my thoughts on the series as a whole for the next blog post, but for now, enjoy the final letters page of the series! 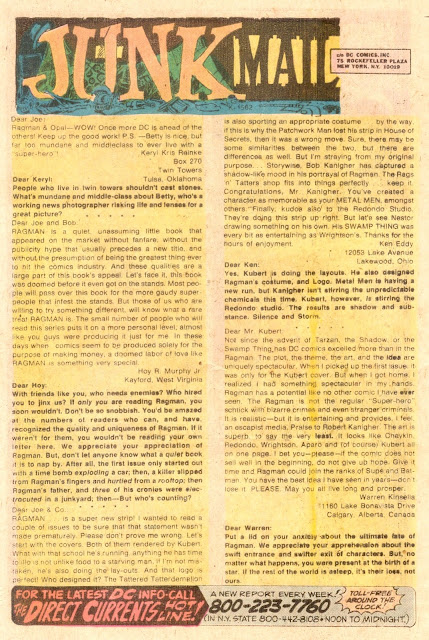 That last one was a fitting little retort from DC for the end of this series, "No matter what happens, you were present at the birth of a star. If the rest of the world was asleep, it's their loss, not ours."

Here also are a few amusing ads from Ragman #5 you might enjoy. I found the Batman and Robin Hostess ad particularly entertaining. (click on the images to enlarge them!) 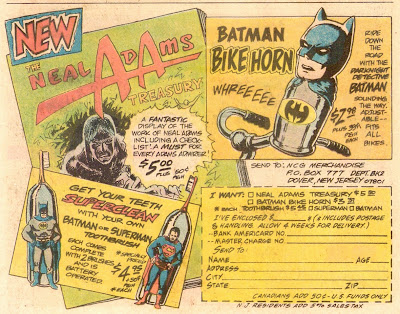 Lastly I want to share this letter from a section called "DC Publishorial" in the back of the issue. The letter details the release of a "tabloid-size book" collecting a four issue story arc by Denny O'Neil and Neal Adams introducing and spotlighting the characters of Ra's Al Ghul, his daughter Talia and the dark detective that unites them all, Batman. The letter was written by Jenette Kahn, publisher of DC comics and perhaps the best thing that had happened to DC in years. Through a bit of digging, I found that the book Jenette mentions in her letter was actually "Limited Collectors Edition #C-51" (or at least that's how you'll discover it if you look for it online). It's title was never really mentioned in the letter, but hopefully you can find it cheap on ebay and read some amazing stuff from an even more impressive creative team that I DEEPLY respect. 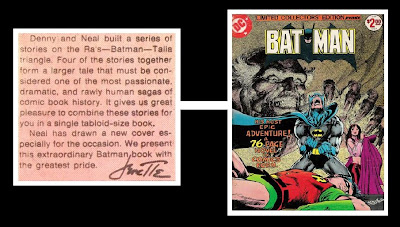 See you all next time for my final thoughts on the Ragman series from the 1970's! In the meantime; like, comment, share and follow/join the blog and it's posts! I love feedback and hearing that SOMEONE SOMEWHERE is reading these things!
Posted by Chad Bokelman at 12:05 AM