In 1941, one of the best movies ever made came out, "The Maltese Falcon". It starred Humphrey Bogart and Mary Astor in a story about a priceless falcon and the hunt to possess it's riches. The legendary Bogart played the part of Samuel Spade, a freelance private detective originally hired under the guise of finding the missing sister of Mary Astor's character, Bridget O'Shaughnessy. Unfortunately for Samuel's partner Miles Archer, the whole gig was a ruse to flush out Ms. O'Shaughnessy's partner in crime Floyd Thursby. Apparently Floyd made off with the Falcon without Bridget and she was intent on getting it back before another interested party headed up by a man named Kasper Gutman "the Fat Man". The whole thing screams of 40's detective noir and it's one of my top favorite movies of all time. I've seen it probably hundreds of times, but I'll leave you to determine if you'd like to see it, here's the trailer:


So why on EARTH am I raving about an AMAZING Humphrey Bogart movie from 1941 on a blog all about Ragman? Is it to impress Robert Kelly with my knowledge on this particular old movie? Nah, I've got nothing to prove, but I do like name dropping from time to time. Actually, this ad from Ragman #4 published in 1977 brought the whole tale of my favorite movie to light. 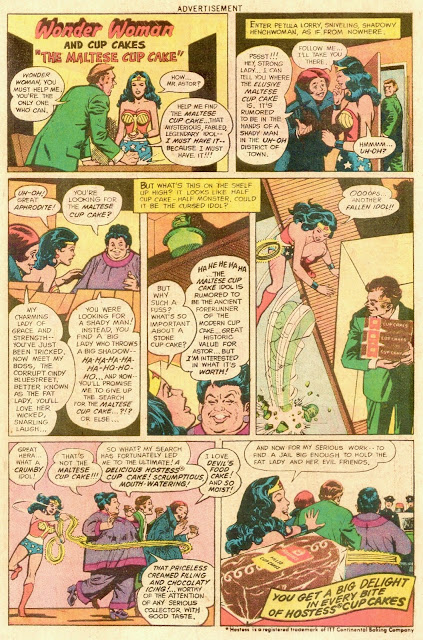 Ah Hostess, you never cease to amaze me...even though you're out of business. Wonder Woman stars in a Hostess riff on 'The Maltese Falcon' minus the Falcon, plus the cupcakes. EPIC.

So allow the mega-fan of the Maltese to break it down character by character (and show off my fanboy knowledge).

It seems that, in this seven panel ad, Wonder Woman stars as Humphrey Bogart/Samuel Spade. I've already focused in on Samuel, so let me move on.

The instigator of this entire charade plays, oddly enough, the parts of both Bridget O'Shaughnessy and Joel Cairo. Bridget we know, but Joel? Joel is the main partner of "the Fat Man". A well spoken fellow intent on taking possession of the Falcon at all costs, including two failed attempts to hold up Samuel Spade (both freakin HILARIOUS).

Whomever this redheaded player is in the Maltese cupcake game, it's obvious shes a counterpart for Wilmer, "the Fat Mans" expendable lackey with the serious anger management issues. There are no character correlations, but just look at the coat. Yeah, definitely Wilmer. Wilma?

And last but not least we have the "Fat Lady" playing the role of the "Fat Man". Do I really need to explain this one more? "Fat Man" is the grand architect of the whole plot thus, so is the "Fat Lady".

The point? I'm just glad that a classic Hostess ad (notorious for being entertaining) was a rip off of one of my favorite movies of all time...and appeared in the penultimate issue of the ORIGINAL series of one of my favorite characters from the DC Universe. I just HAD to talk about it. Besides, it gave me the chance to take a moment to put the spotlight on one of the best movies ever.