Alright kiddos, tis time for another excursion into the tattered world of DC's tatterdemalion of justice, the Ragman! This time around we're jumping headlong into the surprisingly short 'Ragman' issue #4 by the wonder team of Kanigher, Kubert and the Redondo Studio. Just look at that cover! You know, for a man not well known for his superhero drawings, Kubert really paints an epic picture when he puts his pen to Ragman.

This issue is entitled, "The Dream Killers". Why is that? Well, issue four is where Kanigher decides to tackle an issue highly publicized in the 1970's...drugs. This issue, published in February/March of 1977, came out scant six years after the comics history changing story "Snowbirds Don't Fly" in issue #85 of the legendary "Green Lantern/Green Arrow" run by Denny O'Neil and Neal Adams. (an issue I'm all too proud to say I own)

The story opens with a young woman, Jeanne Wilson by name, tripping insanely on the contents of a little white envelope. Soon enough, the young woman has died of her overdose as the three individuals who sold her the drug look upon her lifeless body, contemplating how to get rid of it. 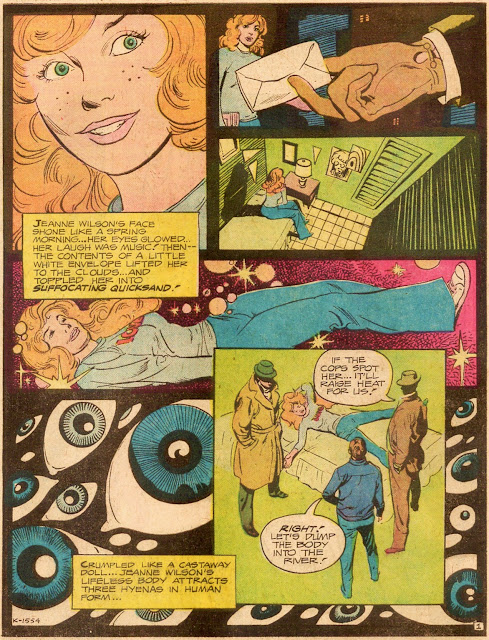 As they reach the bridge they intend to dump her body off of, they quickly take notice that Ragman is watching them closely. He dives in to throw a few punches and drives the crooks away, leaving the body of Jeanne behind as Ragman discovers he's too late to save yet another victim of this new, potent drug. 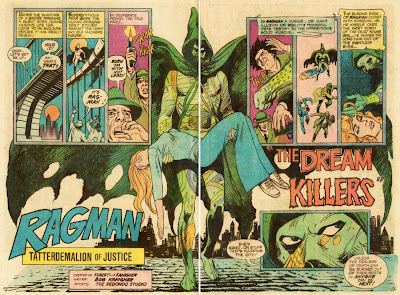 Later, as Ragman has brought the body of the young woman to the morgue, he stands amidst as a doctor berates the city Lieutenant for not stopping the rapid distribution of the "dream killer" drug. In addition we learn that, not only is this influx of narcotics flummoxing the police, but that the death count is rising...and spreading to the younger members of the city as the doctor explains he just yesterday performed an autopsy on a twelve year old. During their discussion, the Ragman slips silently away and back to Rags N' Tatters. 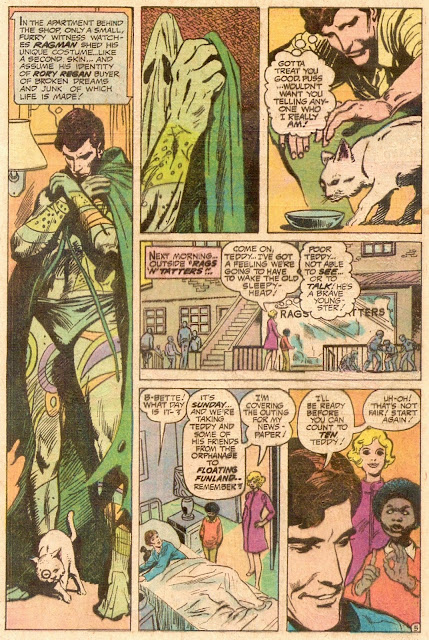 That's a nice bit of continuity. Both Teddy and his little white kitten have become recurring characters from the last issue (see: "Attack of the Rocket Powered Wheelchair!"). But any-who, Rory, Bette and Teddy (along with all of the orphans) are off to the amusement park. Now, normally I don't post two pages back to back but, in this case, I wanted you to see how much fun these kids have and how much happiness is experienced at this park. 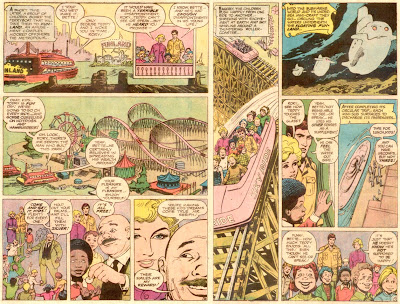 ...and then Bette throws a wrench into the works with her ill advised statement. Seriously Bette?! It's been established that this young mans other senses are heightened and you're going to DARE say, "He doesn't know he's not supposed to be happy" right in front of him? And who are you to say that? The kid was born this way and he chooses not to let it rule his life. Yet you're so close minded you think him naive rather than headstrong and courageous? Whatever Bette. You're wholly irredeemable in my eyes.

After the day o' fun at the amusement park, the kids load up onto the ferry to go back to the mainland when suddenly, from the top of the ferry, one of the boys jumps into the water...heavily under the influence of the "dream killer". Rory (as Rory) dives into the water to save him, but the currents will not allow it as the child is ripped out of his hands and pulled down to his death. 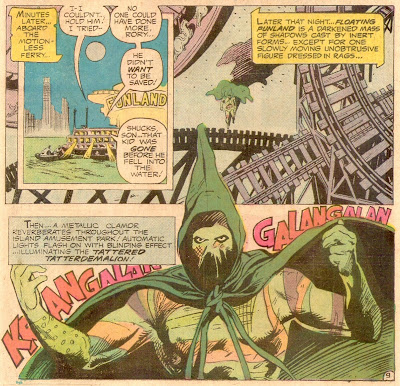 Somehow Rory has grown suspicious of the amusement park and shows up later to confirm his suspicions when suddenly... 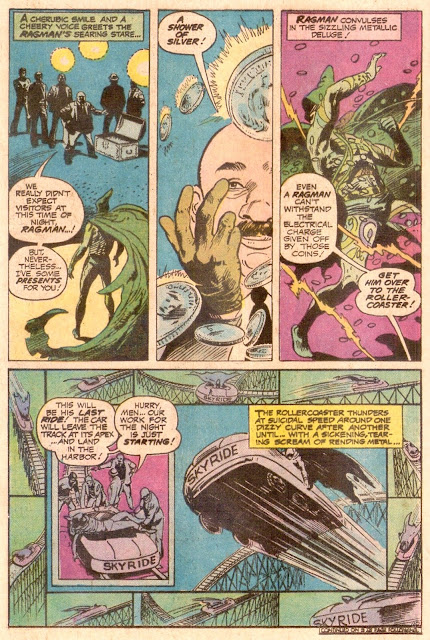 Yup, electrified silver coins AND the loveable and kind Mr. Seriph is actually a drug kingpin. Oh how far the world has fallen. So, Rory is rocketed into the icy waters below and, upon contact with them, awakens and (while ALREADY under water mind you and WITHOUT coming up for air first) dives and discovers one of the mini subs serves as the transport vessel for getting the drugs into the city. Resolve and will redoubled, Rory leaves the dark cold abyss to single-handedly dispatch all of the henchmen on the spot. Apparently Mr. Seriph ran out of electric coins. 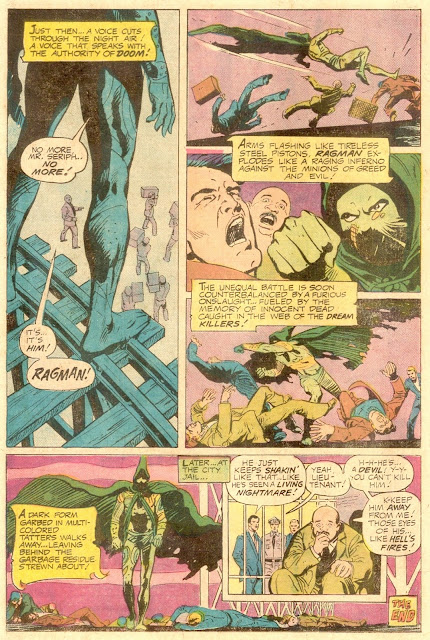 And the end. You know, the drug story-lines ran heavy in the 1970's after the success of O'Neil and Adams' "Snowbirds Don't Fly" storyline. Most of the stories came across as preachy and forced, but this one had almost the same glint to it that the "GL/GA" issue did. It merely SHOWED what a danger drugs are without some long grandiose speech proclaiming such to the reader. I commend Kanigher and CO. for their subtlety and talent.

So why was this issue so short? Well, unless there were reasons I'm not aware of, it seems Kubert was sick of playing backseat in one of his own creations. Thus he drew five pages of a silent short story "written" by Kanigher. There are absolutely NO speech or thought bubbles. Nothing but sweet tatterdemalion justice beautifully illustrated by Joe Kubert himself. They're widely available elsewhere, so I'll just re-post them here:

Beautiful no? And don't forget about the letters page! Nothing quite so epic as last time, but DEFINATELY a fun read to be sure! 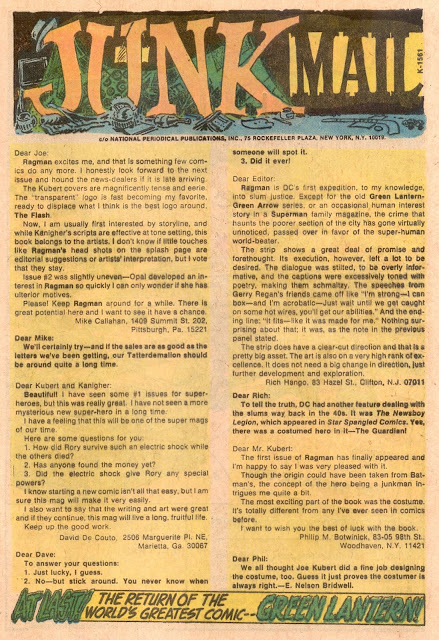 The first letter is particularly sad considering the next issue, issue #5, would become Ragman's last appearance for a good little while. The second and third letters really speak to the idea that Rory's powers as Ragman stem from the electric current that passed between him, his father and his fathers friends as they died. And the third ALSO makes a connection to "Green Lantern/Green Arrow" series that I myself didn't make and its a point well made! And what would a Suit of Souls blog entry be without a ridiculous 70's advertisement? Well, here you go kiddies! Own a piece of Florida!

"Wait Chad," you say. "Just ONE small tiny advertisement? Did they get better or something? Are you holding out on us?" Why no dear reader! This blog is just awfully long already and the best ad, actually requires it's own blog post! So hurry up and comment, like and share THIS blog entry and hurry on over to the next post for some AMAZINGNESS!
Posted by Chad Bokelman at 6:34 PM