Welcome back fellow Ragman enthusiasts for another exciting review of classic Ragman! This go around we're checking out issue number TWO of the Kanigher and Redondo Studio creation from the 1970's!

Things open up with a quick shot of Rory in his Ragman costume as his monologue quickly summarizes the basic high points of last issue, suddenly we cut to a car chase and the vehicle being chased cuts into the back 'yard' of Rag N' Tatters. The half double page spread then reveals that these two crooks in the car were intent on searching the Rags N' Tatters lot for the cash left behind from last issue. For reasons unknown, they've also abducted a gorgeous ebony skinned female and are ONLY being chased because they ran a red light... 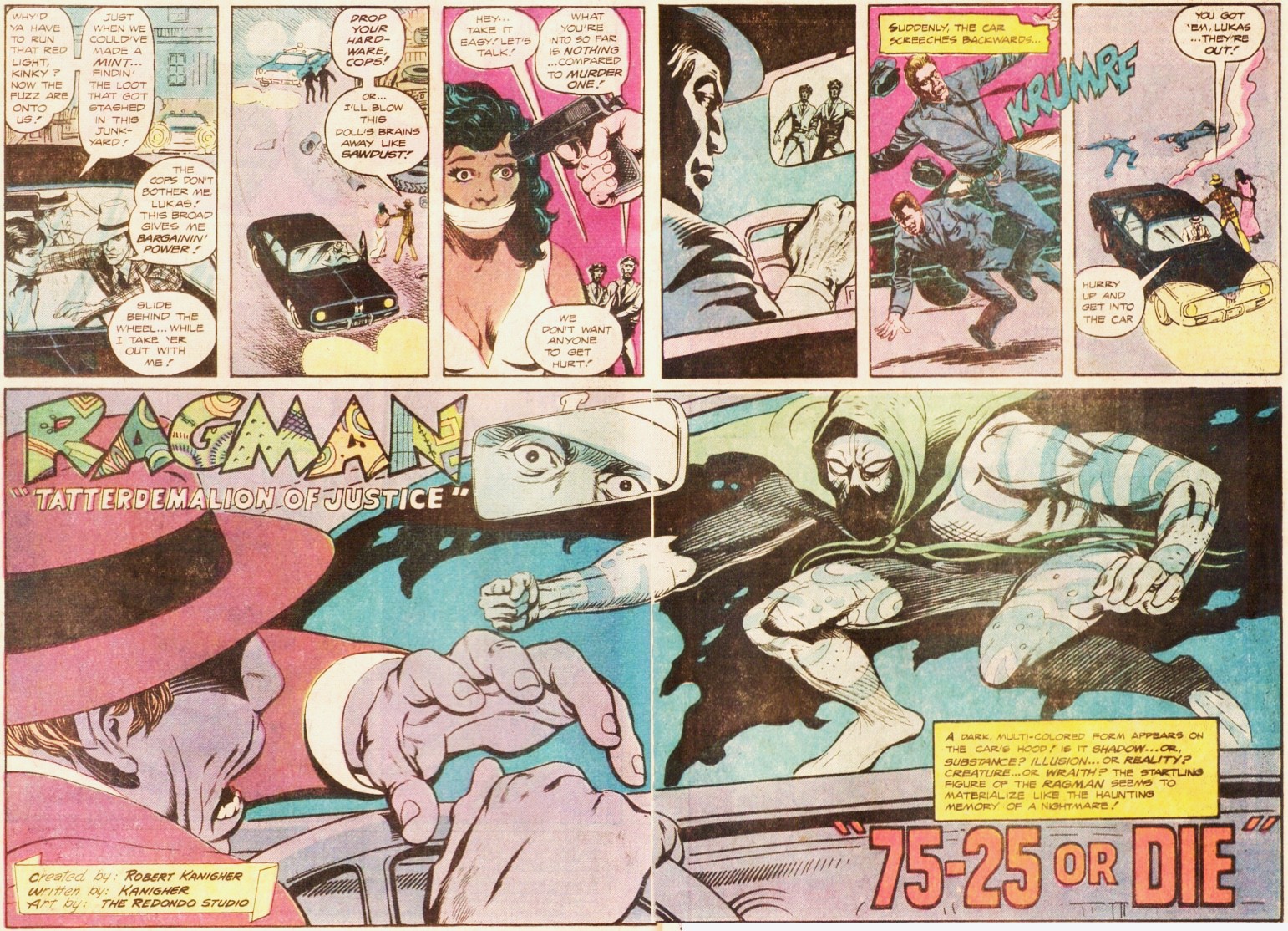 As Ragmans sudden leap onto the hood obstructs the view of the driver, the car goes careening out of control and crashes. Ragman quickly dispatches the crooks. The stunning dark skinned goddess' name is revealed to be Opal. She promptly thanks Ragman for his help... 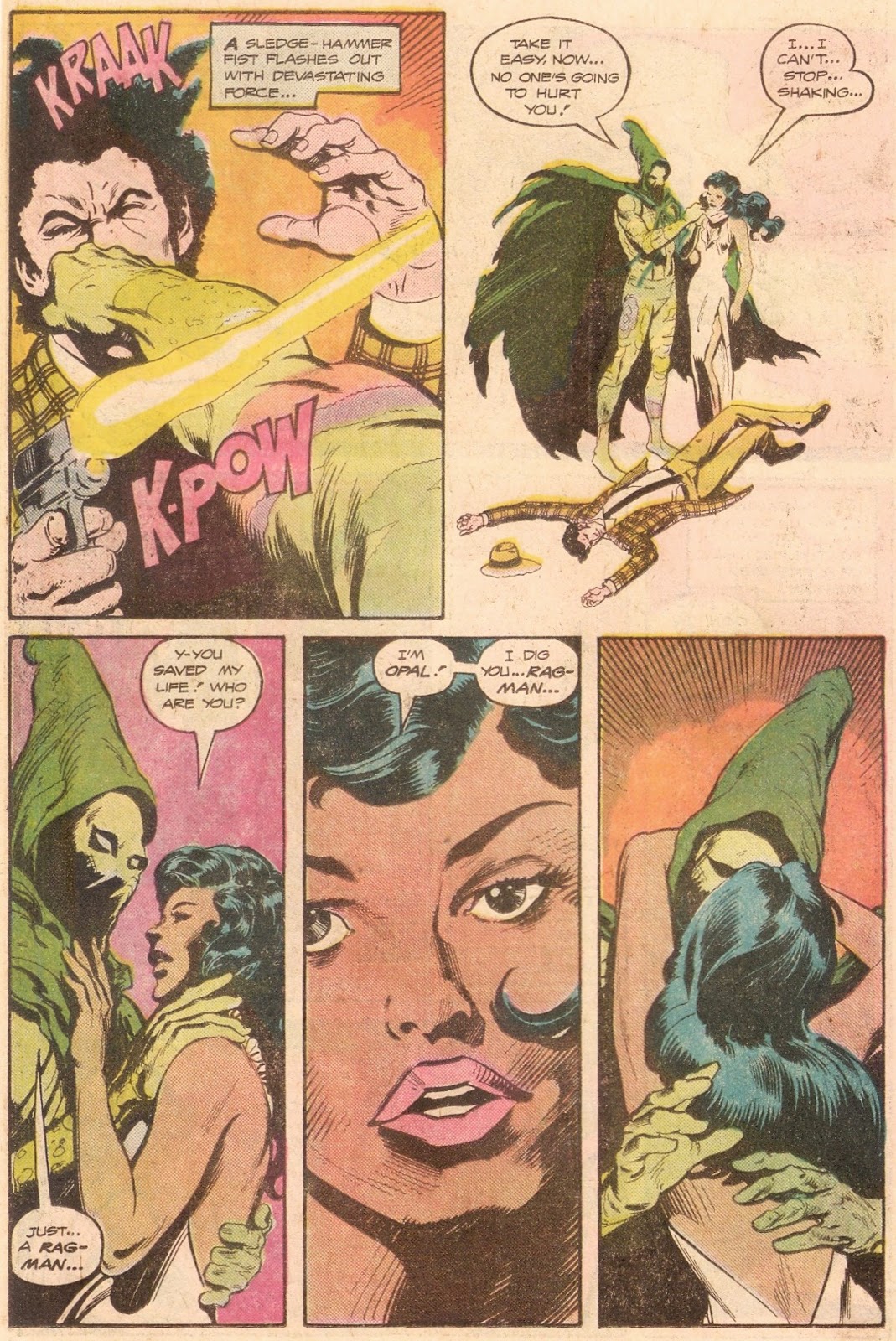 The police start to show up as Ragman disappears into the night, not without FIRST telling Opal to forget him, to which Opal responds...

Now here is where I'm going to take a break from the recap and focus on something VERY important, an imitation of Shag Matthews from 'Firestorm Fan' and  the 'Fire and Water Podcast'. LOOK AT THAT GIRL! The curves! The skin tone! Those LIPS! THAT BODY! That simultaneously coy and passionate behavior! Opals right my friends, there is NO way Rory/Ragman is going to forget this girl! (especially not with a biotch like Bette on hand)

*ahem* Back to the recap at hand (pst, someone AWESOME at drawing women get me a sketch of Opal posthaste)...

Rory makes the quick disappearance back into Rags N' Tatters, bandages himself up and sets about working all while thinking about Opal. (can't blame him) Oddly enough though, despite the ruckus in his shops back alley a few moments before, the cops never show up for a statement and he never wanders outside to check. PLOT HOLE! Damn you 70's comic! You're supposed to be spotless in your execution!

We get a little more recap from the first issue and a quick cut to the visual of the money still hidden within the mattress that is now in a STACK of mattresses in the back lot (miraculously unharmed by the car explosion moments ago).

Then, the next day we get yet another almost full page devoted to just how great of a guy Rory continues to be as he runs Rags N' Tatters. 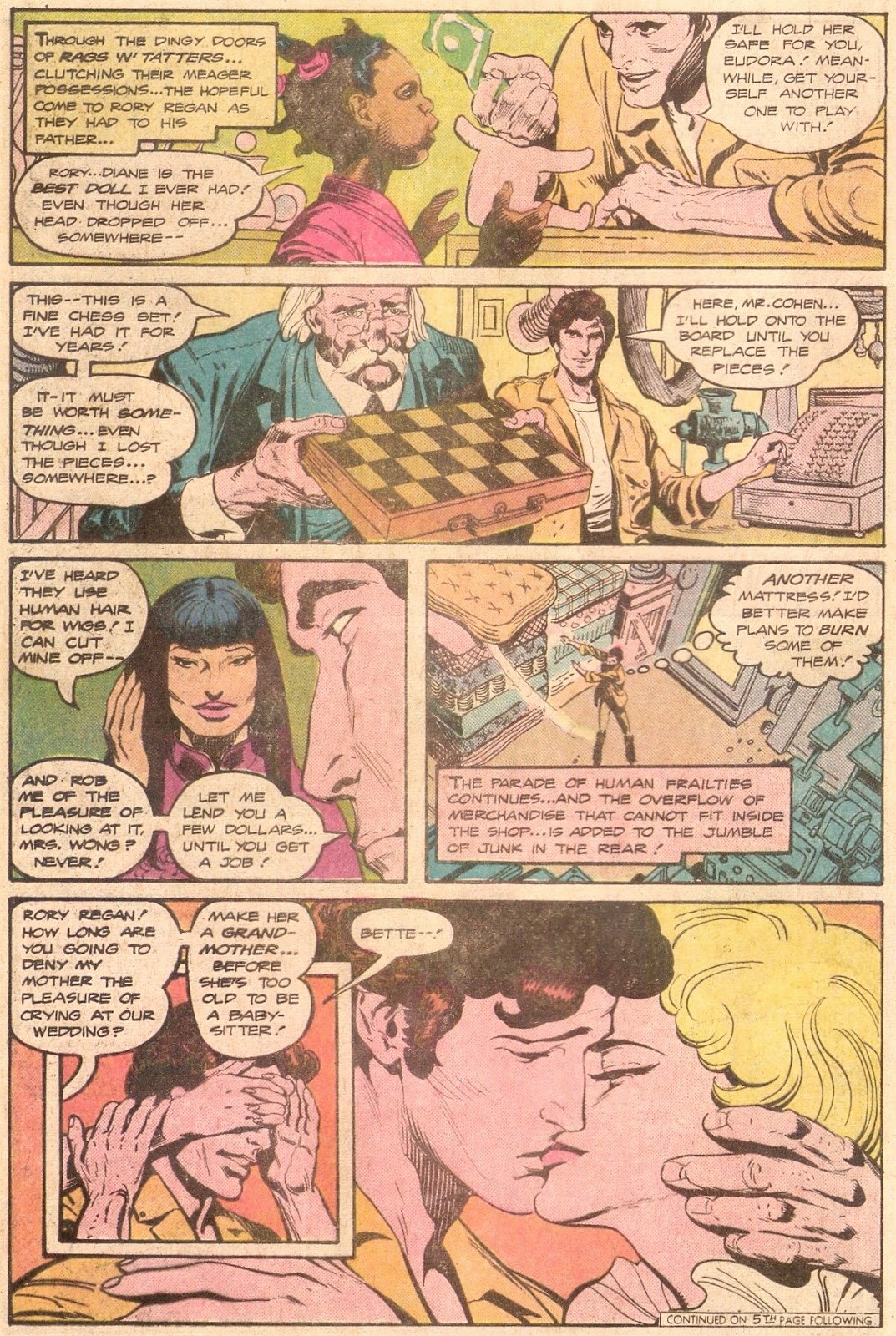 GREAT. The bitchy (and apparently romantically pushy and desperate) Bette has returned! Although, before moving on  everyone notice the quick panel about Rory complaining about the amount of MATTRESSES piling up at the shop and his plans to BURN some of them? Remember that...annnnnnd we're back to bitchy Bette.

Suddenly the first words out of Bettes mouth after that deep kiss are a reprimand against Rory for having "changed" since Vietnam. Then she tries yet again to get Rory to leave behind the neighborhood and the shop. AND then this pushy blond headed bimbo has the audacity to quote the bible and says she'll wait for Rory like Rachel waited for Jacob. *facepalm*

I will give Bette ONE bit of credit to her criticism of Rory and his father. Rory knows his father WELL. Bette didn't. In her eyes, perhaps he was the old junk-man who spent his nights getting drunk with his friends. Maybe she just thinks his father was an old lazy drunk?

We then cut to the downtown office of "the SYNDICATE" where the following ensues... 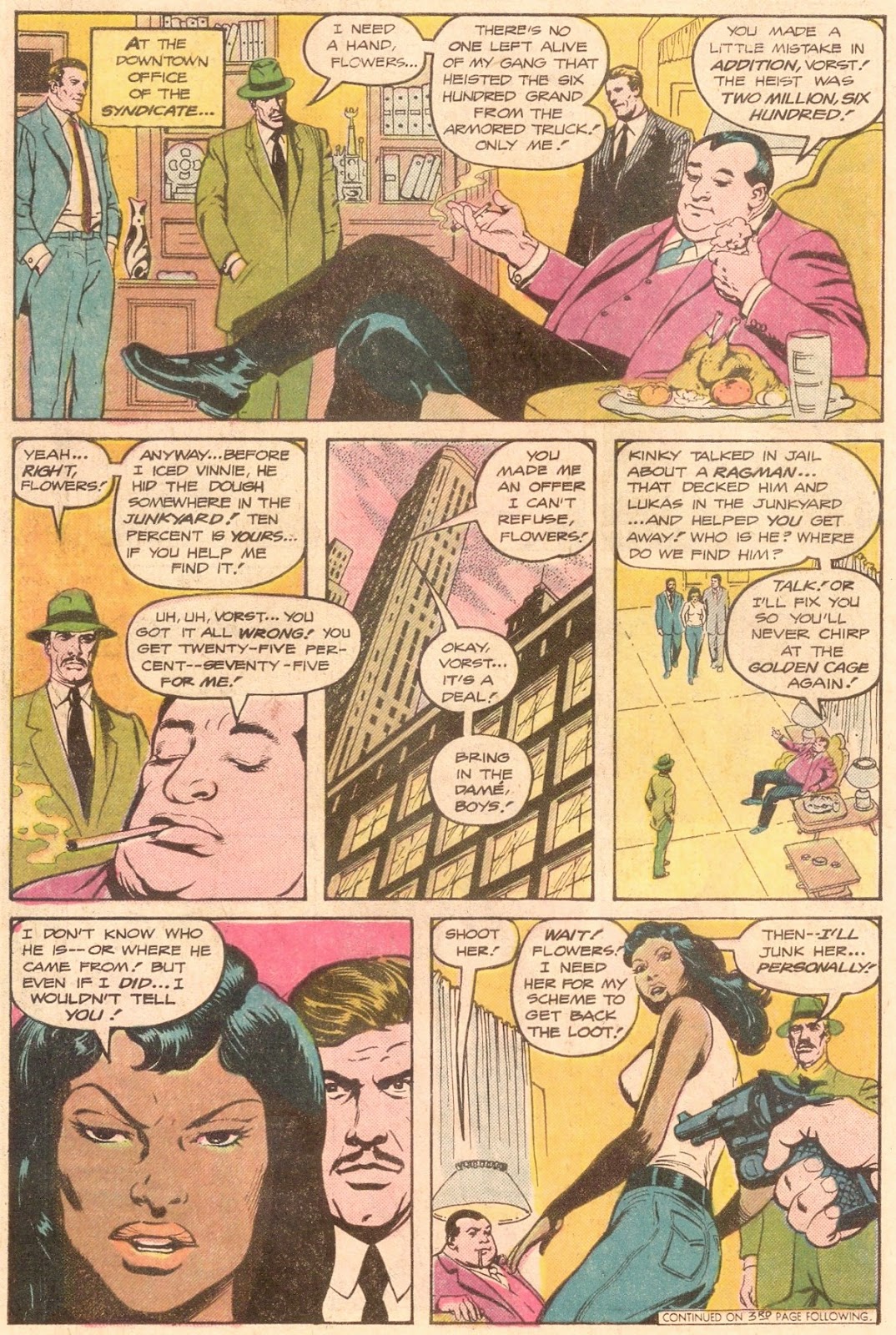 Enter a "spy" the next day (who is really and old drunk paid off by the syndicate) to sell a cuckoo clock to Rory. Little do they both know that, at 11 o'clock that night, the cuckoo clock is set to explode. It does and the crooks are waiting in a helicopter for Rory to come running out with the millions of dollars in tow. (they assume he knows where it is and is just hiding it and that it will be the first thing he saves in a dramatic situation). Then we discover that, JUST IN CASE, Ragman shows up, the crooks have set Opal in the junkyard as bait.

Well Rory falls for it and luckily doesn't get himself or Opal killed. Instead he hops onto the helicopter trying to turn himself and Opal into people burgers. As he dodges various bursts of gunfire from the helicopters occupants, he comes to realize that he'll soon grow too tired and then quickly unfastens a tire from the helicopter and tosses it up into the whirring blades... 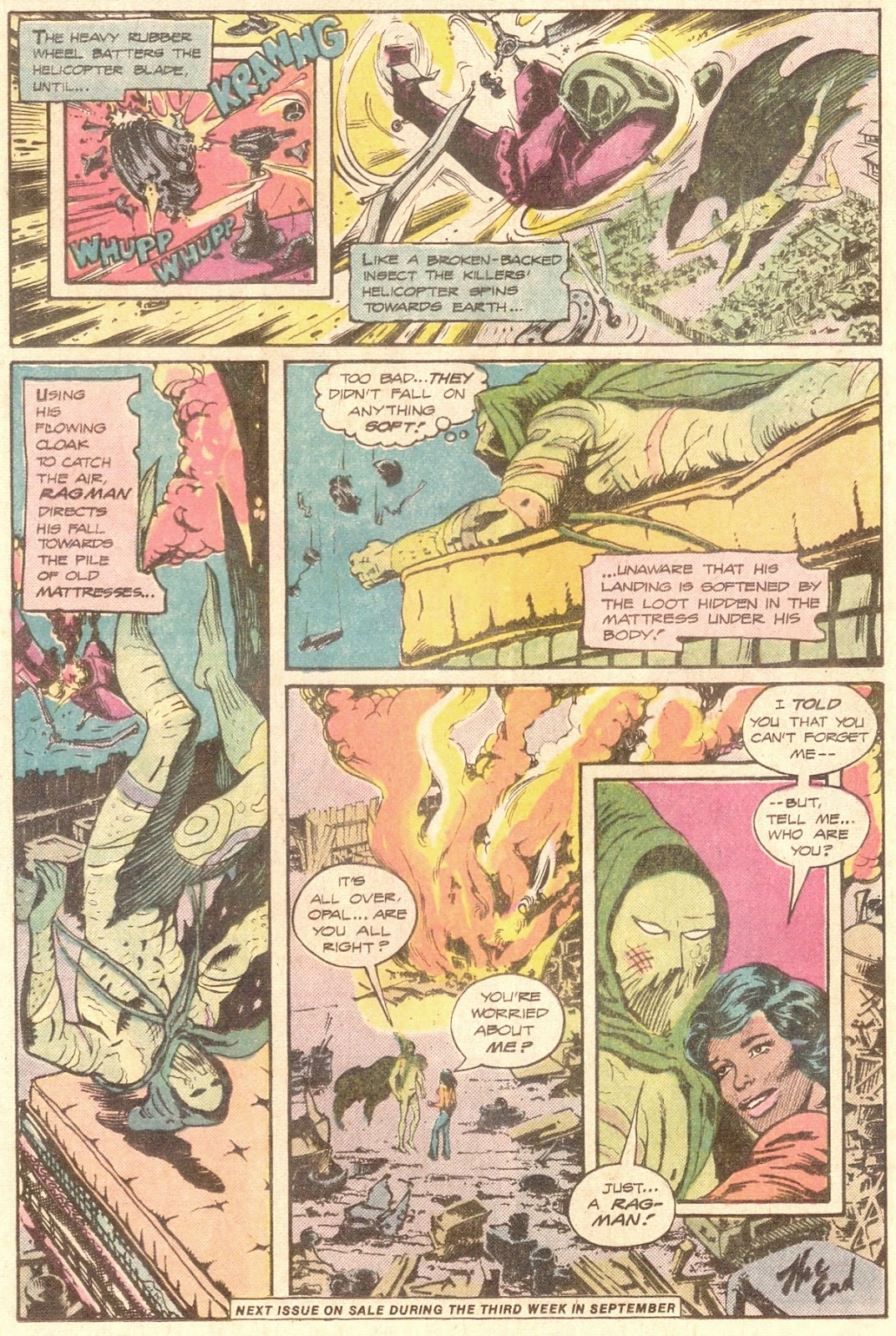 And there you have it!

Now, as you may be able to tell, my synopsis contains most of my thoughts, but I do have one FINAL thought on the story itself.


Any who, this issue was also filled with amazing advertisements. There's not much to say about them so I'll just show them off here for you to read (click images to enlarge).

Be sure to like, comment, share and subscribe!!!!! And don't forget to come back next time for the recap of issue #3! It may be more of the same, but next issue starts the infamous letters pages and something in there is going to be VERY interesting to you...and that is NOT a bull crap tease...I'm totally serious. Just you wait and see loyal reader!!!