BREAKING NEWS BREAKDOWN - 'Ragman' to Return to the Pages of DC Comics this October 2017! 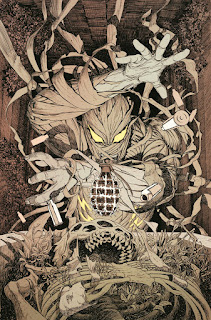 As you’ve probably already heard, DC Comics will be bringing their live action star and Tatterdemalion of justice back to the comic page in a six issue mini-series due out this October! The series will be written by Ray Fawkes with pencils by Inaki Miranda, colors by Eva de la Cruz, and covers by Guillem March. (You can see the first cover here on this post!)

“War vet Rory Regan is plagued by the death of his time after a failed mission to find a hidden treasure in the Israeli desert. While battling survivor’s guilt back home in Gotham City, Regan discovers that he actually bought the treasure back home with him, in the form of the Suit of Souls. The Suit of Souls has the ability to trap and collect the souls of others, including those of his dead partners.

With the aid of his dead teammates, Rory begins to learn more about the abilities of the suit, when something evil begins to brew in Gotham. An evil demon from hell wants the Suit of Souls, and is sending his minions to retrieve it for him. Now Rory must learn how to use the suit and its powers to stop these evil forces from invading Gotham City before it’s too late.”

Since this is THE spot on the net for all things Ragman, it would be my duty to dissect that for us! Let’s start with the first four words. Yep, it’s going to be like that.

“War vet Rory Regan” - Perfect. We know we’re sticking with our usual guy Rory! This isn’t his father Gerry or anyone else from the Regan family nor is it anyone new. Additionally, Rory is still a veteran. Based on what we hear later on in the description, we know it’s not Vietnam as has been portrayed before, but when you’re updating the Ragman character for the modern generation, the specific war isn’t necessarily as important as the fact that he’s a soldier.

“…is plagued by the death of his time (I assume they mean ‘team’, is the whole world running low on editors BTW?) after a failed mission to find a hidden treasure in the Israeli desert.” Some good information here. In the first post-crisis Ragman series, Rory was struggling with some PTSD issues. They weren’t a huge part of the story, but Pat Broderick and Keith Giffen took up some panels to make sure it was a part of his character. Additionally, we get the “hidden treasure in the Israeli desert”. Keep that in mind.

“While battling survivor’s guilt back in Gotham City, Regan discovers that he actually brought the treasure back home with him, in the form of the Suit of Souls.” We’re back in Gotham! Fantastic! I’ve always loved the idea that Ragman is a Gotham based hero. Batman started out protecting Gotham but let’s admit it, Batmans focus is now much more big picture these days. Having Rory start out in a little slum corner of Gotham grounds him in a very realistic way. I’m glad that is staying a part of his origins. So the “treasure in the Israeli desert” is the Suit of Souls! This means two things. The first being that the Ragman suit is no longer a part of Rory’s family history. In the comics before this, Rorys father Gerry wore the suit before Rory ever knew it existed. The second thing it means is that it’s still very likely that the suit maintains it’s mythological Judaic origins in relation to it’s creation following the legendary Golem. Even if the sequence of events of the suits origin may be tweaked, I know a lot of Ragman fans enjoy the Judaic ties the character has.

“The Suit of Souls has the ability to trap and collect the souls of others, including those of his dead partners.” Hmm, ok here we run across something I’m not entirely sure I’m going to like. The suit can trap and collect the souls of MORE than just evil doers now. It can trap ANY soul it sounds like. Now on the one hand, that opens up some story telling potential in a significant way without changing the core powers of the character. On the other, it makes the suit of souls dangerous and malignant in a way I’m not sure I’ll enjoy. But here’s what I will keep in mind going forward (and you should too) it’s a suit worn by an individual. I’m going to take solace in the idea that Rory can then influence who it traps going forward.

“With the aid of his dead teammates, Rory begins to learn more about the abilities of the suit, when something evil begins to brew in Gotham.” Nice. So it looks like Rory can still communicate with the souls in the suit. That was always a fun aspect of the story to have Rory able to gain insight from the souls. Additionally, Rory was able to call on their strengths and abilities too in the past. It remains to be seen if that will remain true.

“An evil demon from hell wants the Suit of Souls, and is sending his minions to retrieve it for him.” Interesting. Certainly the encounters with the purely supernatural went through the roof for Ragman during his ties to the Shadowpact. So it’s definitely not out of left field for him to deal with a problem like this. I’m curious to see how it affects the tone of the story. Will it maintain a purely supernatural tone? Or will the inclusion of demons from hell give it a horror bent?

“Now Rory must learn how to use the suit and its powers to stop these evil forces from invading Gotham City before it’s too late.” Nice. That’s our hero line. Origin story plus heroic mission. I wonder also at the involvement any other DC character will play in the story. While cameos like Batman or someone from the Bat family are cool (and DC can’t seem to not mention Gotham without them these days) I would still like an opportunity for Ragman’s story to stand on it’s own without the added push from “Oh! Batman shows up this issue guys! Make sure to get it!”. But again, that hasn’t been announced so let’s judge it on it’s own merits.

Speaking of the story itself, DC released some interior pages (sans lettering) for us to take in, so let’s take a look at those! (Click images to enlarge!) 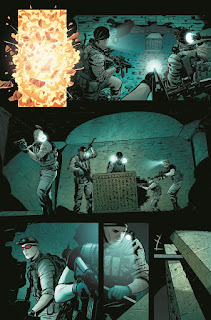 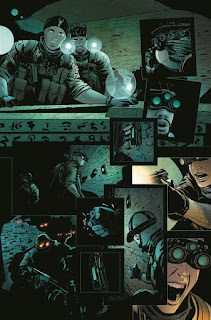 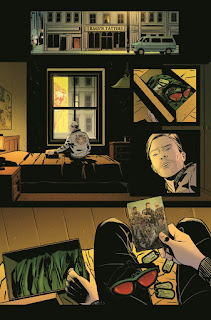 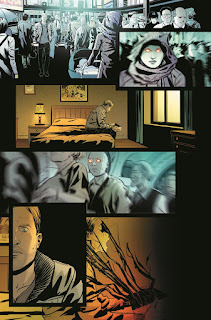 Excellent! Rags N’ Tatters guys! It’s still there! And that definitely looks like Hebrew on the box they find the Suit of Souls in!

All in all, based solely on this description, it sounds like Rory Regan/Ragman are in good and faithful hands. The adaptations being made are not being made at the sacrifice of an important character aspect or history. I cannot be happier with what we’re seeing so far!

So head on over to Twitter and follow the creative team @rayfawkes and @InakiMiranda and give them some much needed support! And don’t forget to buy the series everywhere you can in October! Tell DC how much you love their Tatterdemalion and vote with your dollars! Don't forget to comment here DIRECTLY on the post! The more traction we get, the more likely we can get Ray Fawkes and Inaki Miranda here for an interview when the series wraps! (Or before if we're lucky!) So share the post far and wide too!
Posted by Chad Bokelman at 12:07 PM