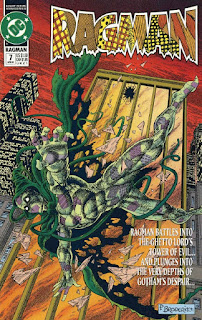 Welcome back Tatters to another REVIEW post! That's right! I've caught the bug yet again and I just HAD to come back with the next review! This time around we're talking Ragman #7 from the 1991 series, the penultimate issue of the series. Just one more issue to go and we wrap coverage of the first Ragman series Post-Crisis.

Where've I been? Well, if you've been keeping up, you know I've been revealing information as we go about Ragman as he appears in Season 5 of The CW series 'Arrow' and comparing it to the comics. Thus far they're pretty darn similar! So I can't wait to learn more as the season progresses! As for why I haven't been posting other reviews, well, I do The LanternCast AND my new show The Action Comics Weekly Podcast. Both of which are very dear to me. I encourage you to check them out! But that's enough personal project posturing! You stopped in for some Ragman content and I'm here to give it to you!

We open in the high rise office of our "big boss" from the past several issues as he learns his operatives in the streets are either dead or unaccounted for. As he hangs up the phone, he looks outside his window to the streets below, thinking to himself that he cannot be clean until he wipes out his past.

Meanwhile, back at Rags N' Tatters, Rory is busy asking Betty if she can handle running a store front as she will be in charge of the shop for awhile. She answer in the affirmative as the Rabbi attempts to trouble Rory for one final word of advice. Rory declines, sarcastically stating that he's, "still digesting the seven other final words of advice you gave me" before slamming the door on his way out. The Rabbi asks Betty if there's anything he can do to help and Betty asks him if he can cook. He says he can't and her response is that she hopes he likes SPAM.

Elsewhere in the city, at one of the hideouts for the Nats, the combined members of the Nats and the Mimes gangs beats information out of one of the "big bosses" operatives. They take his wallet and learn that he works for Spratt Industries. It's then revealed that billionaire Howard Spratt (our "big boss") has been the root cause of all of the trouble the gangs have encountered over the past several issues. They resolve to take the fight directly to Spratt...by attacking him in his skyscraper!

Back over at Rags N' Tatters, Betty chases away a thief while the Rabbi prepares dinner, restating that he's not much of a cook but hey, "as the saying goes, beggars cannot be choosers!" To which Betty retorts with a silent, angry, sidelong look. But across town, over at the offices that house Spratt Industries... 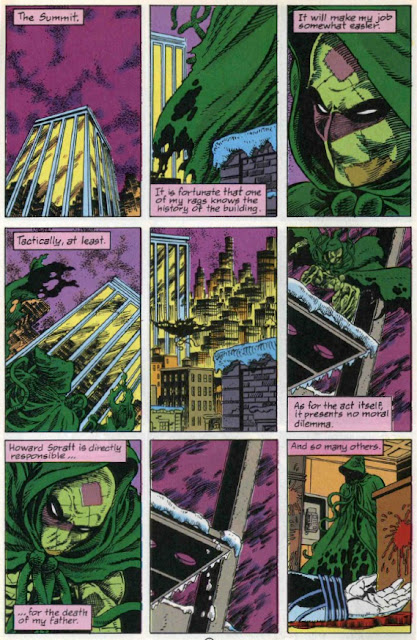 ...and Ragman strolls in.

Bodies already litter the floor of the building, riddled with bullets. The gangs have already arrived. Ragman runs into two of the gang members as they shoot bullets into him. They thing they've killed him, and he deserves it too because, in their mind, Ragman works for Spratt. But their glee at this victory is short lived as Ragman gets back up and knocks one of the men out. The other cowers in front of Ragman, saying he better get back upstairs to his "boss" Spratt as the rest of the gang is up there dealing with him. Ragman doesn't move, which prompts the Mime to ask, "Don't you have any feelings?" Ragman responds by tossing him through the front doors and into the snow before heading towards the elevators. But Rags hesitates for a moment... 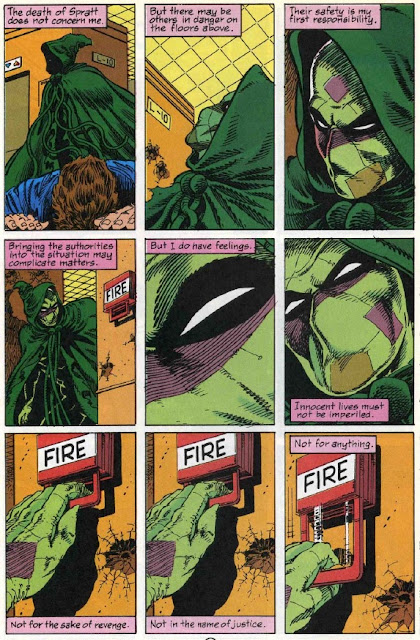 The gangs upstairs are already in Spratts office, threatening him, when Spratt reveals he grew up where they're from. It doesn't matter though as he's quickly shot through the head right as the fire alarm sounds. They head out of Spratts office and are about to head towards the stairs as the elevators don't operate in the event of a fire when suddenly *ding* and the elevators opens revealing Ragman. The gang unloads their bullets into him and it is quickly shown to them that the bullets passed straight through him. Ragman then goes to work, quickly dispatching the gangs. Their leader notices that Ragman is keeping them from the stairwell, and guesses, correctly, that it's because there are people in the stairwell he can use as hostages. But he doesn't make it to open the door as Ragman hurls him by the head into the door and he slumps bloodied to the floor. The rest of the gang promptly gives up... 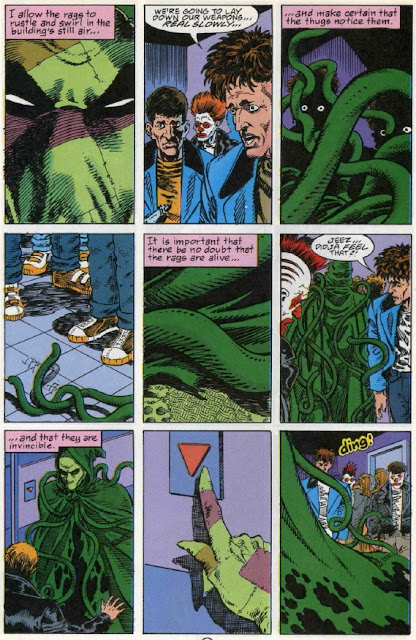 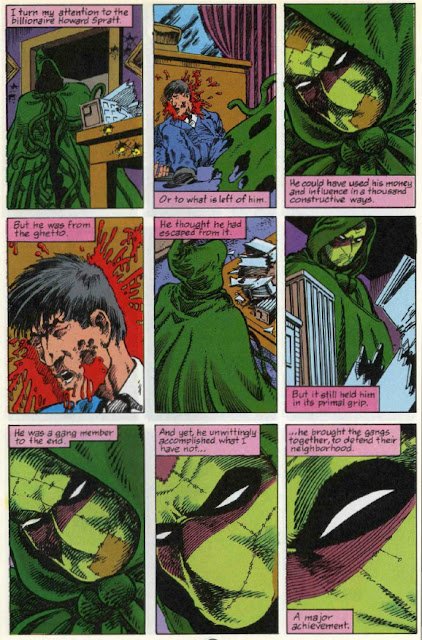 Back over at Rags N' Tatters Betty is looking for the Rabbi only to find that he's left and taken all of his things without a word or a note.

Back at Spratt Industries, the Gotham PD have arrived to round up the gangs. One of the officers in charge (whom I assume is at least a Detective given his lack of police blues) comments that something must've softened the gang up because they're active very docile. We see the Rabbi just outside the police tape watching the scene before turning to walk off into the night... 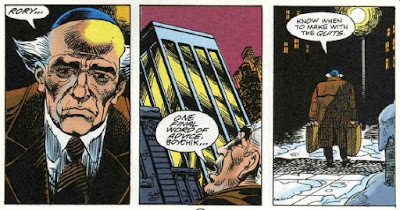 Back upstairs in Spratts penthouse office, Ragman searches desperately for something. Finally he tosses aside Spratts tabletop model of the city to reveal a safe, which he rips off it's hinges... 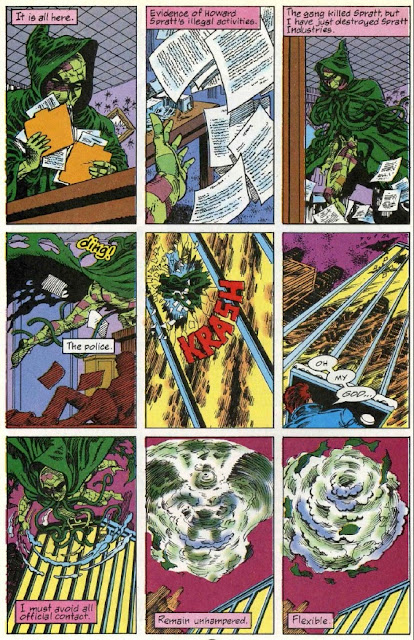 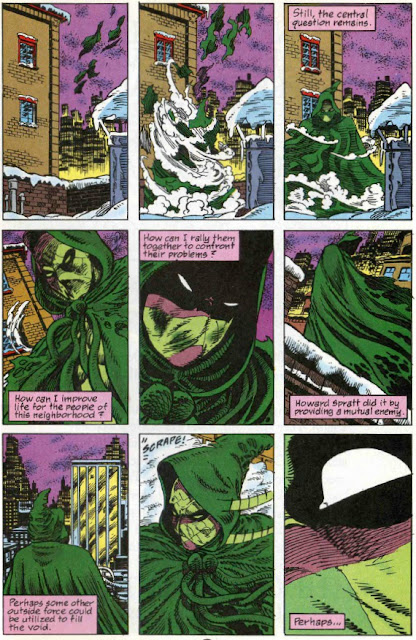 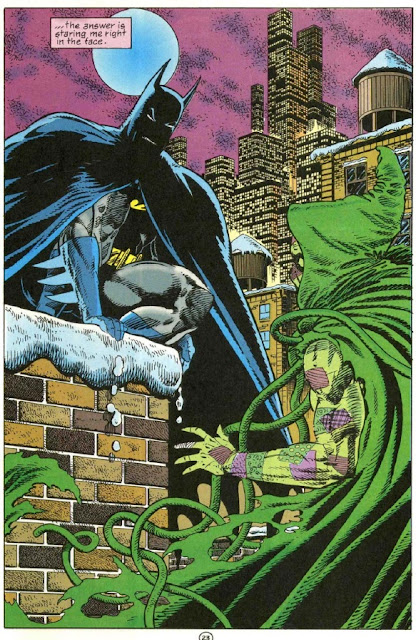 Back at Rags N' Tatters, Betty looks at a picture of Gerry Regan and wonders aloud, what if? What if she had gotten her act together before he died? What could've been? It's silly to have regrets, but it sure would've been nice...

And that does it for this issue!

Overall, I liked it. It may feel a tad anticlimactic if you've been following the series thus far, but the seeming lack of payoff in terms of Ragman facing down Spratt actually serves the story. Ragman doesn't get his hands on Spratt and we see Rory shine through. His sense of morality and justice. How he REALLY handles the situation. And it's a payoff I find just as worthwhile. And, as far as cliffhangers go, it doesn't get much better than, "Uh oh...Batman is PISSED..." The art also looks great. Perspective seems off in places, especially during the indoors scenes in Spratt Industries, but that's really a minor nitpick.

Now, ONTO THE ADS! 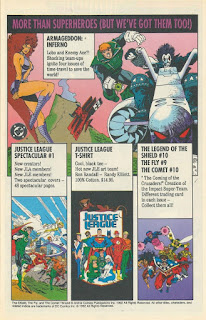 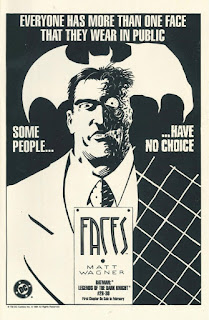 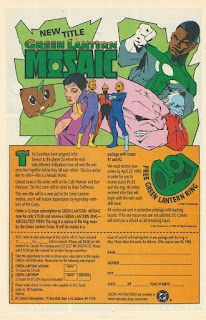 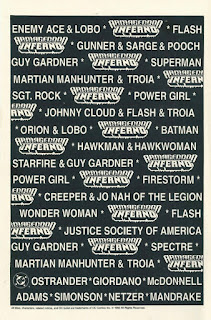 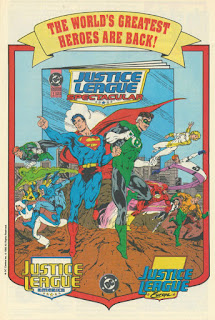 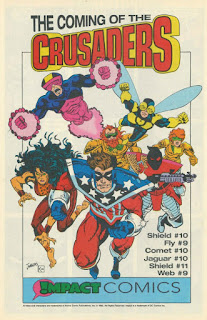 Ahhhh Green Lantern Mosaic. Such an INSANITY FILLED WEB you weave. BTW, if you're curious if the LanternCast ever got around to Mosaic, we DID! Well, when I say we, I mean Dan Kutzke did several years back. But those episodes are still available for you to listen to just by CLICKING RIGHT HERE!!

Now for the letters page! 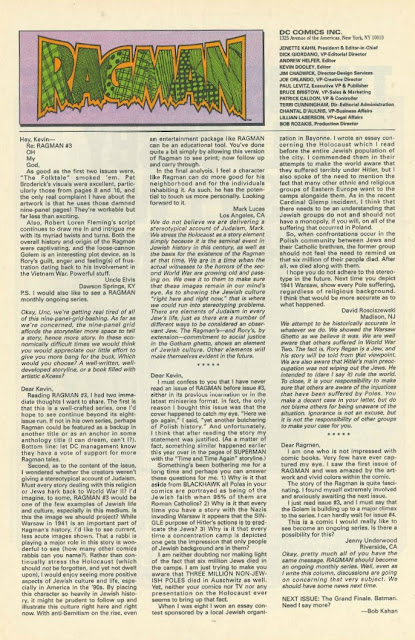 Looks like there's LOTS of praise for Ragman! I can't blame them though as the feedback here comes from readers of issue number 3, which is a phenomenal issue. Interesting so many people take issue with the portrayal of Judaism in Ragmans history as it relates to WWII. I saw very clearly that the story was from a very specific viewpoint, why criticize it for not showcasing the entire history of WWII?

Well, that's it for this time readers! Be sure to leave a comment RIGHT HERE on the blog post itself so I know you're out there reading AND what you're thinking! I'd love to hear back from you! Till next time Tatters!
Posted by Chad Bokelman at 1:43 PM