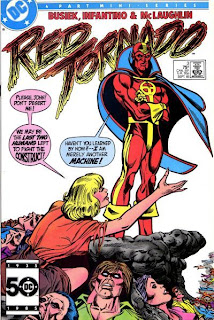 During the massive DC event "Crisis on Infinite Earths" our favorite Tatterdemalion of Justice made a small handful of other appearances (besides Crisis itself). One of those appearances was in the Red Tornado four issue mini-series from 1985 written by Kurt Busiek with art by the great Carmine Infantino.

Truth be told, I have no special love for the character of Red Tornado (or Reddy as fans and even some DC characters call him). I don't hate the guy, but androids have never really been my thing. Same with Vision over at Marvel. Just not my thing. But, luckily for you, I found someone who IS a huge fan of Reddy! In fact, he runs a blog about the guy!

So rather than expose you to me struggling halfheartedly to fake some passion for this mini series (which has nothing at all to do with the quality of the story), and then forcing you to read my uninteresting dispassionate re-cap, I decided to shirk my responsibility altogether and extend an invite to someone who DOES have excitement for this mini-series and can absolutely give you more info on it than I could! Doug Zawisza from the Red Tornado blog know as Ulthoon!

Take it away Doug!

"A little while ago, I was invited to appear on the Fire and Water Podcast and graciously accepted the offer from awesome co-hosts Rob Kelly and the Irredeemable Shag. We talked about “Justice League of America” #192 and 193 from 1981. Those were among the first comics I bought with my hard-earned allowance. They also empowered me to discovering comic book universes for myself rather than relying on others to guide me.

Shortly after that conversation, I received a lovely invitation from this blog’s esteemed host, Chad Bokelman. Chad reached out to me and issue me a challenge: talk about Ragman’s appearance in the Red Tornado miniseries. The first Red Tornado miniseries. Written by Kurt Busiek. With art by Carmine Infantino. Do the sentence fragments make it any more dramatic for you? They do for me.

Think about this for a moment: a guy who runs a blog about Ragman asked a guy who has a Red Tornado blog for a few thoughts about the former’s appearance in the latter’s first miniseries. Yeah. It hurts my head too. Neither of us has been able to celebrate our characters making anything resembling regular appearances in comics since 2011. Yes, admittedly it seems like there might be some Red Tornado goodness coming soon, but for now: no Red Tornado and no Ragman.

But we DO have back issues!

I will say this, though: Ragman is one of those “Who is THAT guy?!” characters. I first encountered Rory Reagan – and had no idea who he is – among the ocean of characters aboard the Monitor’s satellite in “Crisis on Infinite Earths” #5. Yes, the very same, “Crisis on Infinite Earths” #5 that Chad blogged about just under a month ago. At this point in “Crisis,” I recognized a few characters, but there were far more I did not. Ragman stood out to me as he was moving across the spread, one of very few characters the great George Pérez chose to put in motion. So much awesomeness was in the comic book for me. So much, as it opened with Red Tornado being tormented by an off-panel voice. Flash tried to defend Reddy, but to no avail. Most importantly, “Crisis on Infinite Earths” #5 sparked my enthusiasm to learn more about the DC Universe.

I would later learn much more about Ragman through his adventures with Batman in “Brave and the Bold” and even in his own 1991 miniseries. Somewhere in between I would discover the Joe Kubert-Robert Kanigher series from 1976 and rejoice in its artistry.

But that’s neither here nor there. Chad asked me for some thoughts on Ragman’s appearance in the Red Tornado miniseries. He showed up for a panel. The end.

The first issue of “Red Tornado” hit in April of 1985 and boasted a cover of Superman threatening some serious harm on Reddy. While the series came out around the same time as “Crisis on Infinite Earths,” like “The Shadow War of Hawkman” it chose to tell its own tale, rather than get wrapped up in the events of “Crisis.” Naturally, all of that would lead to disaster later on, but for the sake of the series, it allowed Kurt Busiek to tell his Red Tornado tale and Carmine Infantino to draw it in all of his angular awesomeness. As for the consequences it would bring to Hawkman, that’s another story for another time and place.

I wasn’t a big fan of Infantino’s art back then. He’s an acquired taste, like beer, especially if you’re more accustomed to artwork in the style of George Pérez or John Byrne. To a certain extent, I see the rationale behind having Infantino work on this series, but his choices for drawing technology still leave something to be desired.

The Red Tornado miniseries pulled the Construct out of mothballs and set him against the world. As the only machine immune to the Construct’s control, Red Tornado had to be dealt with otherwise. Through available technology, the Construct was able to briefly control the Justice League of America long enough for them to expel Red Tornado and sow the seeds of doubt in the android’s circuits. From there conquest awaited the Construct. Along the way he would possess humans, further expanding his hold on the world leading to a climatic battle with Red Tornado.

Red Tornado #3, however, gave the heroes of the DC Universe a chance to battle the Construct, including the two-page spread where Ragman shows up. In that image, with Green Lantern, Flash, Superman, Batman and more fighting alongside him, Ragman is the only character capable of actually destroying any of the Construct’s drones. For me, that solidified the character’s validity and piqued my curiosity all the more when I found this character again, crossing the sea of humanity on-board the Monitor’s satellite. Unfortunately, this plot thread is left dangling in the Red Tornado miniseries. The Construct (spoilers!) is eventually defeated and humanity returned to normal, but Busiek and Infantino never circle back around to this scene, which would have been a beautiful piece o closure.

Hindsight being twenty-twenty, we can call for that conclusion now, but at the time Kurt Busiek was keen on giving the Red Tornado a new life to grow into. Ragman would have to find his own way home and his own series to star in.

Thanks, Chad, for giving me this chance to chat up one of my favorite characters in Red Tornado while drawing a quick connection to Rory Reagan in the meantime."

Absolutely Doug. Thanks for taking a moment to breathe some life into that old rusted bucket of bolts. haha! All kidding aside folks, alot of us DC bloggers like to refer to out little community as the "Justice League of Bloggers". There's a very simple reason for it, a mantra if you will, "Every character deserves to have their own blog dedicated to them."

Not everyone is a huge fan of Red Tornado (myself included) but I firmly believe every character deserves their spotlight and to have it be positive wherever possible. So thanks to Doug for educating my readers on Reddy and sharing his passion for the character.

Well, my work here is done folks. Any more rambling and I might end up trying to upstage Doug! lol In the meantime, go on and share, follow/join, like and comment on this entry and all others here at the Suit of Souls blog! Comments are my absolute favorite as it lets me know what you folks are thinking!

Next review we get one final "Crisis" era appearance before we move on to Post Crisis Ragman! (I'm pretty sure, I'll be sure to research more just in case I missed something) Anyone venture a guess as to what comic that appearance was in? (NO SEARCH ENGINES!)
Posted by Chad Bokelman at 8:37 PM