Alright, I suppose I owe you guys an apology. I'm a little late (OK, A LOT late) in this posting. I really do want to maintain a constant posting schedule. So why the super late post? Well, aside from personal demons, I just could not get it up for this "issue". I really and truly haven't the faintest clue why. The art isn't bad and the story isn't terrible. I just couldn't have cared less about this story.

But, I realized that, in my endeavor to cover all Ragman appearances, I'm probably going to come across some stuff I will not like. so I better get used to it and stick to my guns. Which is what I'll do here.

Now, that being said, I LOVE the cover to this issue. This issue of course being 'Batman Family' #20, the final issue of the anthology. Now, I'd like to pretend I know everything there is to know about the stuff I cover on this blog but the fact is that I don't. I know nothing about the 'Batman Family' title other than what I've heard from other fans. A few of them are quite vocal as to it's quality. I'll take their word for it. Regardless, this story took place in the last issue of the title and it seems they chose the return of Ragman to be a big enough deal to herald it on the cover. 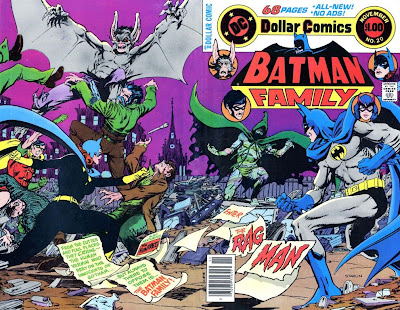 Now THAT is some gorgeous Jim Starlin artwork. I just love the fact that the cover confrontation featuring the return of the Ragman...takes place in a junkyard. Nice little nod there. But, on to the story itself.

The story opens with Batman going all...well...Batman on some thugs looting a tenement. As the text informs us, they provide barely a workout for the caped crusader, but he takes them on regardless. After laying them out, he radios Gotham P.D.

Meanwhile, after the cops arrive, amongst a crowd of onlookers stands Rory and Bette. As Bette lines up a shot of the recently foiled looters, a man in the crowd bumps into her, throwing off the focus of her photo. Batman, all the while overlooking these proceedings, notices this and concludes the bump was purposeful thus alerting his curiosity. Our story follows Rory and Bette back to Rags 'N' Tatters and into a selfmade darkroom to develop the photographs. Via the art of exposition we learn that Bette is freelancing with Rorys help. Their story? How the local area is being neglected and turned into slums. They're hoping to "sell" the story to a paper called "The Blade"...all of which Batman overhears and plans to assist by placing a call to the editor as Bruce Wayne.

Cut to Bruce telling Gordon whats going on and updates him on HOW he came across those thugs. Apparently, while darting about the street in the Batmobile (which looks like a Porsche and nothing more) Batman nearly side swiped an entire family. Turns out, after talking to them, they were forced out of their homes, so Batman took it upon himself to go take care of the thugs that forced them out...

See? That's one Batman constant I've always enjoyed. The reaction of people when Batman just disappears on them. I have no idea why it amuses me so, but it does.

Anywho, we flash on over to the boss of the thugs forcing people out of their homes (please, there's ALWAYS a boss) then over to Rory looking over some "circumstantial but unmistakeable" pattern to the events he and Bette are covering. He heads back to Rags 'N' Tatters and discovers Bette's been beaten half to shit. 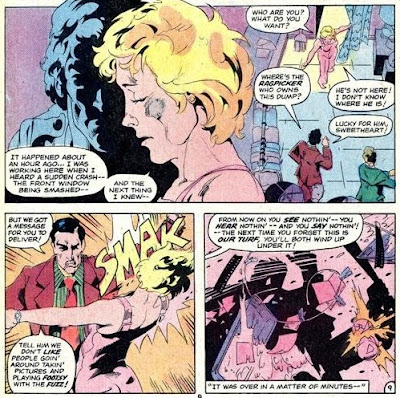 Rory hears her story and tells her to go home and rest up (not, you know, to a freakin hospital) and that he'll take care of the rest. It's only now that the reader becomes privy to the secret history of the Ragman (that we all know by now) as the story recaps for us briefly. Then we move back over to the Batman side of things as Bruce is getting ready for a night on the town. He notices something in the yard and quickly changes back into Batman when suddenly (and according to plan) Alfred floods the yard in spotlights and the Ragman and Batman come face to face for the first time... 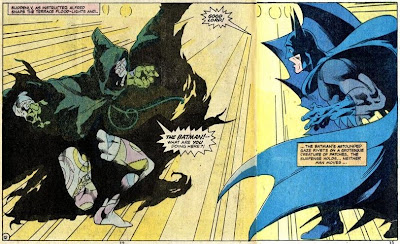 Rags reveals to Bats that he's actually after Bruce Wayne. Apparently Rory has learned that Bruce owns the land all of the affected buildings stand on. Bruce being the common link leads to Rory believing that he is responsible. Batman attempts to explain that they ARE owned by the Wayne Foundation, but managed by an outside agency. Rory will have none of this, punches Batman and escapes, but not before Bats discovers that Rory and Ragman are one and the same (apparently by just recognizing his voice).

Rory goes after the "boss" and breaks in on him and his cronies in the middle of a (surprise surprise) card game and takes them out. Batman joins in and explains how the original managing operation was taken over by thugs so Bruce really ISN'T responsible after all. They realize the "boss" has escaped out the back door and decide to team up to take him down. HERE is where we get my FAVORITE part of the issue. Twelve panels of complete and utter silence. Just two figures of shadowy justice closing in on the bad guy. AWESOME. 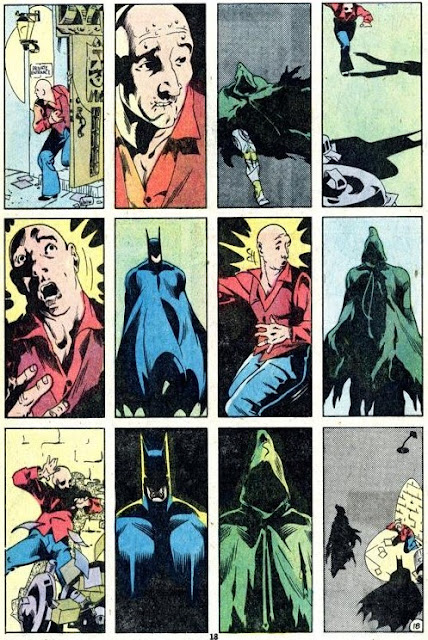 The epilogue reveals that Bette's story is published and receives great acclaim. So much so that Bruce Wayne stops by to make amends for all the bad done in his name and offers to pay for any and all damages done. Not only that, but the dashing playboy offers Bette and Rory a grant to continue their work (and thus funding the Ragman, of course).

So why did I dislike this so? Like I said, it wasn't the art. The art wasn't my favorite. And the story wasn't bad either. It's just...

OK look. This is supposed to be the first meeting of Batman and Ragman. Having never read this before, I expected something a little more....grandiose. Maybe I was just putting unrealistic expectations on the issue and it couldn't live up to them.

I think a lot of it had to do with the format. It was told very quickly to fit into the anthology format. Maybe that played into the condensed and rushed feeling that I felt throughout the book.

But hey, the cover and those silent 12 panels are definitely the takeaways from this issue. So I suppose there IS some good in everything.

I'm not sure how I feel about the whole "Bette beating" side of things. Oh, it's awful, don't get me wrong. But was it necessary? Don't forget, Bette was a bitch in the original series. Very unlikeable from the get go. Is it possible that they did this to her to try and make her a more appealing character? To give the reader a chance to sympathize with her? It's an awful suggestion I know, but I can't help but wonder if there wasn't some other reason for their choices here other than just pure storytelling beats...

Anyways, drop a comment below. Share, like and follow the blog. I love feedback. Hey, I could be wrong on this issue and this story. Maybe there's something here I'm missing. Tell me! I'd love to hear it. Regular posting is coming back. I promise. Just...had to get motivated to push through this one I suppose.
Posted by Chad Bokelman at 9:14 PM