Legends of the Dark Knight #51 - Snitch!

Welcome BACK Tatters! (You know, it's coming so easily to me now I figure that's definitively your name now as fellow fans of the Tatterdemalion) It's been a LONG hiatus for an infinitude of reasons (diverticulitis, unemployment, employment, promotions, etc) but NOBODY want's to spend the first several paragraphs of a long awaited new post with me recapping my life since late 2017 do they? Didn't think so.

This time around the rags we're covering 'Legends of the Dark Knight' #51 written by Robert Loren Fleming (who better sound familiar to you at this point), art by David G. Klein, lettered by Michael Heisler, colorist was Digital Chameleon,edited by Goodwin & Kaplan! The story is entitled "SNITCH" and yet somehow I always referred to it as "Stitch" because it had to do with, well you know, RAGman.

But BEFORE we get into it, why oh why are we not covering 'Cry of the Dead' #1 first? After all, this issue was cover dated September of 1993, yet 'Cry of the Dead' started with a cover date of August 1993. Well look at you astute reader! That is absolutely correct. However Bill Kaplan, editor on both issues, notes in the letters column for CotD #1 (yes, I'm going to get sick of constantly using the name of the series so there's an acronym to keep track of) that this issue of 'Legends of the Dark Knight' actually takes place before the events of CotD #1! And who am I to shirk the sacred nature of canon from a DC editor in the 1990's?

Our story opens with a scene familiar in Gotham, especially by the late 90's, a chase between the Dark Knight Detective and a suspected baddy...on horseback? Our quarry astride a steed is dressed in Gotham PD gear toting a loaded pistol as Batman grapples through the streets to give chase. When a batarang fails to stop him in his tracks, yet succeeds in throwing him off just enough to injure his arm against a passing truck, the horseback rider takes aim and cleanly severs the grapple line mid swing causing Batman to hit the pavement. 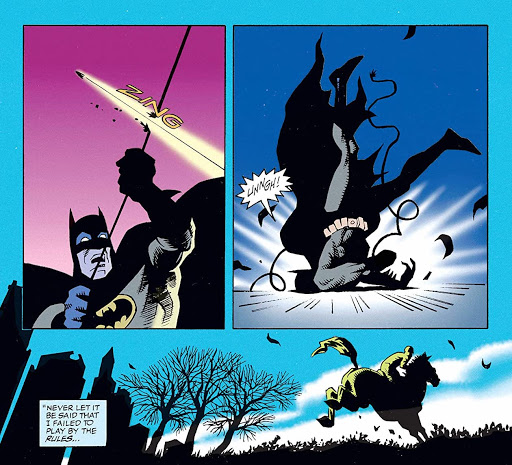 Later at Gotham General, Batman meets up with Gordon to discuss the victim of the foe who made a clean getaway: Dominic Jenko. And just in case there was any doubt as to his guilt Gordon starts his info dump on Jenko with, "If anyone deserved a violent death it was this man" before launching into a history of Jenko's associates. 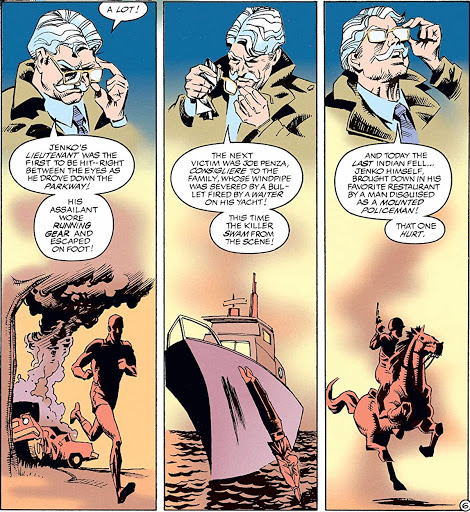 After Batman passes the bullet that severed his line to Gordon as evidence, we see Bruce next in mid fencing lesson with one former Olympic athlete Victor Singleton and losing. Bruce stops to admire the canvas decor on the wall before returning to his less to be knocked on his hindquarters yet again 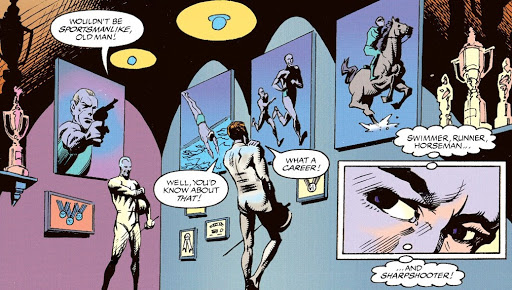 Back at Gotham General Batman arrives to get an update from Gordon who informs Batman that the hit ordered on Jenko was ordered by someone who used a middleman to complete the order for them...AUNT MILDRED!

Readers will remember Aunt Mildred from the previous Ragman series as one of the individuals who took over Rags 'N' Tatters and used it as a drug front. Our Rory absorbed her soul into the suit before he left Gotham. As Batman heads to Rags 'N' Tatters for a lead, the orderly in Aunt Mildred pulls the plug, killing her as Victor Singleton reveals himself to the reader in the darkness of the hospital room as Mildred flatlines.

Over at Rory's former home and family business Batman is greeted by Betty from the pervious series who has been minding the shop. As she pours him a cup of coffee Betty recaps exactly what happened to Aunt Mildred last series. 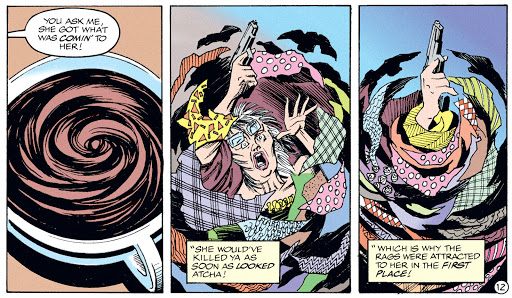 She tells Batman that Rory is staying in New Orleans in the Latin Quarter and that Rory can help Batman get in touch with Ragman. Batman leaves abruptly and before Betty can put the photo from the Latin Quarter back in a drawer, another knock follows at the door. She opens it still holding the photo to Singleton who notices the photo, thanks her for her time and leaves.

Bats is now in New Orleans where he quickly finds criminal activity in the form of a woman being mugged, or perhaps nearly murdered, by a group of blade wielding individuals. One takes her hostage but before his blade can end her life a gust of wind envelops them... 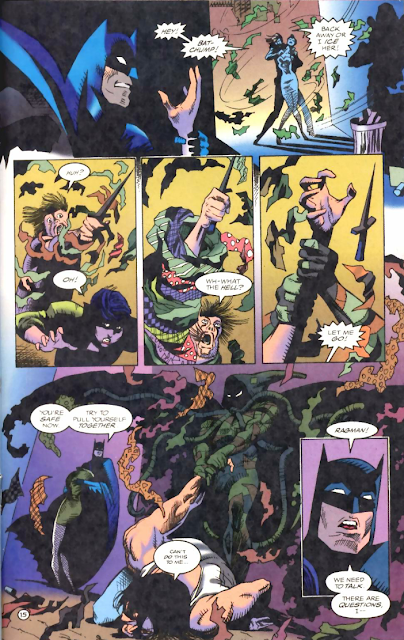 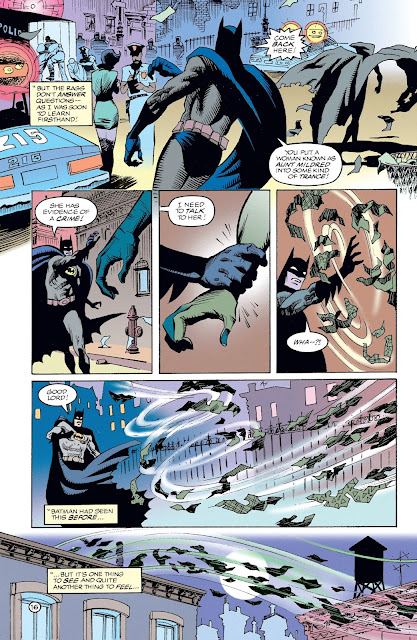 Ragman has started protecting the Big Easy! Rory later awakens to his suit on the floor of his room, screaming at it for the predicament he finds himself in having to confront The Batman for the second time (third if you count the Brave and the Bold issue, fourth is you count Batman Family 20...I mean that was all pre-crisis so does it really count?) As a firetruck goes speeding by, Rory dons the rags again 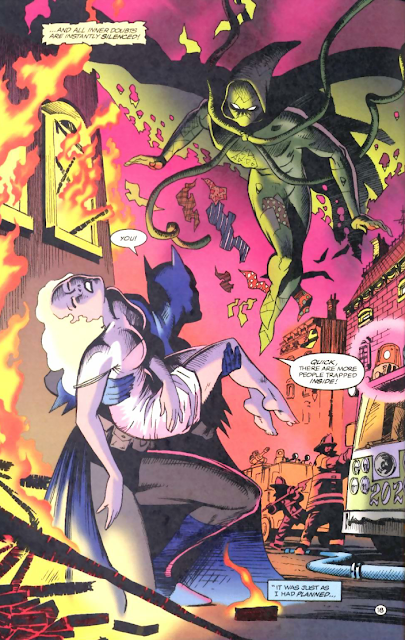 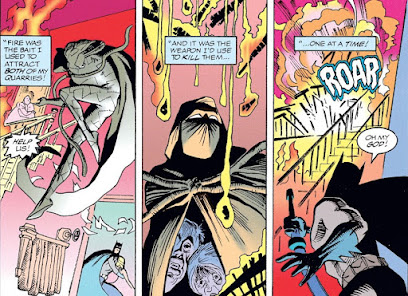 Seeming fearful of the flames, or rather overcome briefly by the fear of the souls within his suit who are weak to flame, Batman is left to evacuate the building and face down the arsonist who started the blaze, Victor Singleton! Failing to deter Singleton physically and mentally, Rags arrives on the scene to wrap his mystic material around Victor. Singleton gets off a few frantic shots before slumping, literally lifelessly, to the floor. Before the building can go up in flames completely Ragman grabs Batman and flies him out the roof.

Not one to be deterred, Batman refuses to let go of Ragman and demands that they go back for Singleton when suddenly the visage appears of Victors face in a whisp, absorbed into a patch on Ragmans suit and sealed with the Hebrew word for truth, אמת, or rather "Emet". 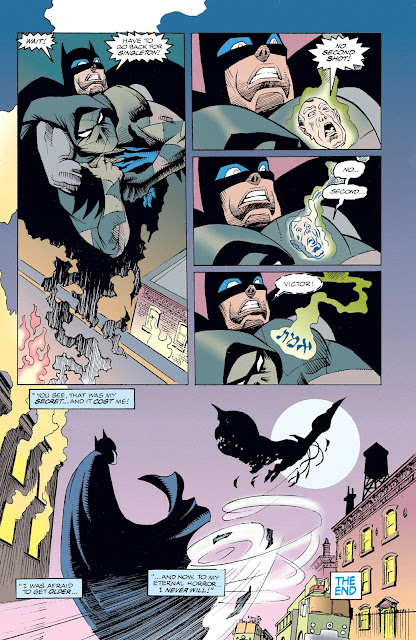 And that is that.

What a wonderful story. It moved at a fast pace and the identity of Victor was revealed just as quickly, as was the travel to New Orleans by all parties involved. But forgiving that the art was wonderfully well done by David G. Klein and you really couldn't have asked for a better one and done single issue with Ragman. Well, at least not one specifically ONLY featuring him...in this Post-Crisis reality. Pre-Crisis I'd say the 'Brave and the Bold' #196 is wonderful.

I'd absolutely recommend this to someone unfamiliar with Ragman who maybe doesn't want to read a story ONLY featuring him but gives them a side step into his world by way of another familiar DCU face. There's really nothing here that leaps out as a change in continuity as a matter of fact, shout outs to the previous series by way of Aunt Mildred and Betty were a VERY welcome sight and I can ABSOLUTELY see how this is a perfect middle ground issue between the two 1990's Ragman series, especially with Robert Loren Fleming being the writer and continuing that feel of the previous series. If one day Ragman adventures are migrated to a collected edition, DC Comics would be remiss to not include this entry!

Quick shout out to Tom Grimm who goes by the handle @NomadicJaguar64 over on twitter. Tom helped me ascertain and confirm the precise meaning behind the symbol on Rory's shoulder as Singleton was absorbed into the suit. Before now we've seen the word "Emet" in the previous series but it was written in English lettering. Now we see the true Hebrew symbols!

I never read the 'Legends of the Dark Knight' series. This is the only issue I've ever consumed. I'm not entirely certain the issue brought me any sort of curiosity for the series as a whole, but if the quality of the stories told remains the same, I'm very happy for the Batman fans who got the chance to read this as it came out!

Now for some ads! 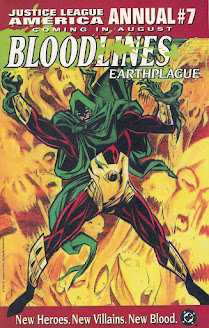 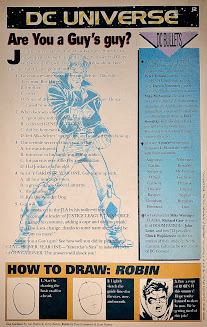 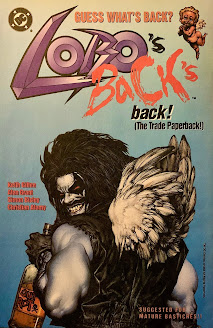 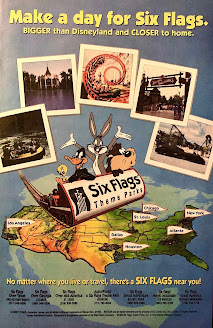 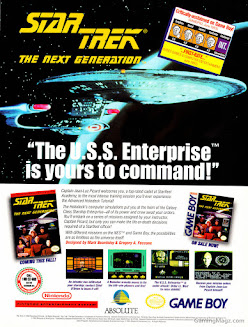 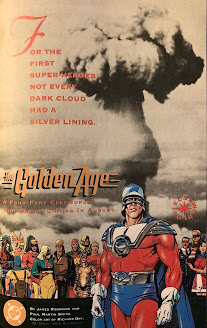 There's NO WAY Six Flags is bigger than Disneyland right? At least not anymore. And of course I had to throw in some decidedly 90's content like the Lobo ad and the Bloodlines ad, because nothing says 90's like Bloodlines...except Knightfall and Reign of the Superman which also had ads in here. And you KNOW I couldn't avoid including that Guy Gardner quiz as a Green Lantern fan!

As you might have been able to tell, 'Cry of the Dead' coverage is coming next so keep your eyes peeled fellow Tatters and don't forget to follow the blog here or over on Twitter @TalkingRagman! Oh and if you don't do any of those AT LEAST leave a comment on the post! Those are the best to see! The adventures will continue next time in the Big Easy!

Posted by Chad Bokelman at 8:14 PM