Batman: The Brave and the Bold #14 - Small Miracles! 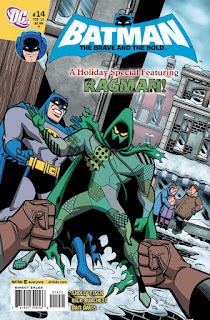 TATTERS! I apologize profusely for the lateness of this post. As I stated last time, I was planning on getting this post up just in time to bookend Chanuka with posts by December 14th. I had the post written up and scheduled to post but evidently there was an issue with the Blogger "schedule" option and we didn't release when I scheduled it. (Thanks to Professor Alan for pointing it out to me on his blog!) Here follows the post I promised you!

Previously I presented you with a FANTASTIC interview with Sholly Fisch (a word I ascribe to the way I felt DOING the interview and interacting with Sholly, not assigning to my skills as an interviewer). Well, HERE I give you my thoughts on the main focus of the interview, the issue from 'Batman: The Brave and the Bold' #14 featuring a special Holiday story with Ragman! Sholly Fisch was the writer, Rick Burchett was the penciler, Dan Davis was the inker, Guy Major was the colorist, and Dezi Sienty was the letterer. Here we go!

We open, as is typical in a Batman the Brave and the Bold story, with a completely unrelated moment. Batman and the Blue Beetle are attempting to stop a sinister plot by Crazy Quilt, Doctor Spectro, and the Rainbow Raider to...change the color of all the snow in Gotham City...

Well, with one batarang, Batman knocks them all out. Leaving Beetle to whine that Bats left nobody for him to take on. 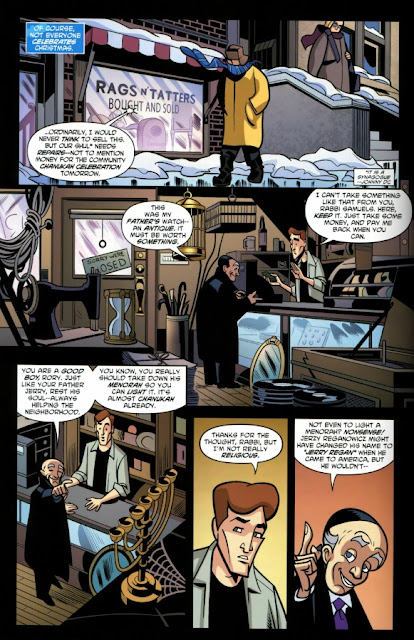 Suddenly a call for help echos from the street and, as the Rabbi goes out to see what's happening, he asks Rory to help by calling 911. Rory of course, darts out into the back alley for his own special brand of helping, not picking up the phone but answering the call for help by becoming RAGMAN.

Out in the street, Ragman stops a thief confidently stealing an older woman's shopping basket full of scavenged bottles and cans for the recycling center. After Ragman returns Lucy's (the old woman) basket, he hears from behind him, "Not exactly an armored car robbery but well done." It's Batman, perched on the hood of a car. Rags retorts with, "Oh, it's you." 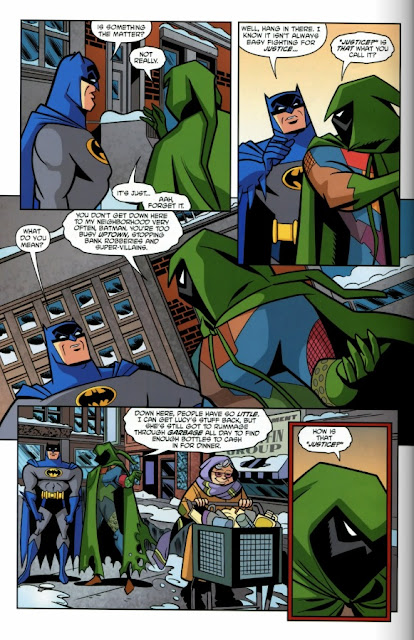 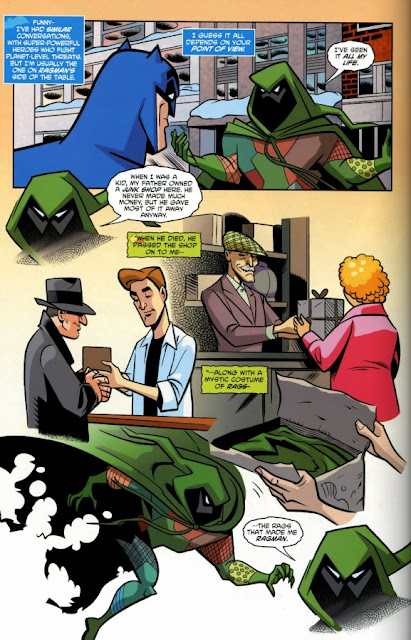 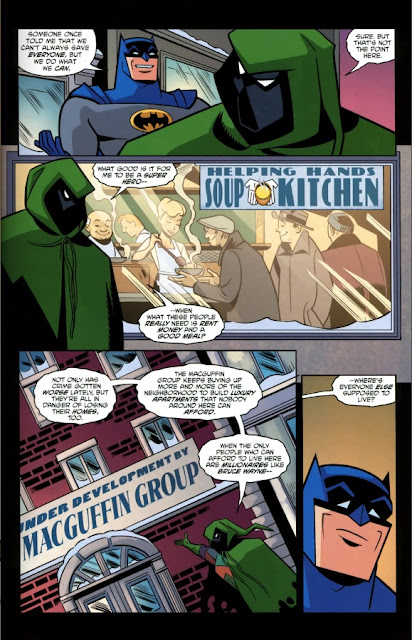 While Batman is left momentarily to ponder the harsh reality put forth to him by Rags, the two hear a gunshot in the distance. At the Synagogue the Rabbi is being threatened by two thugs trying to scare him into leaving the place to them because, "This neighborhood is ours."

Quickly they're confronted with a crowd of locals, complete with Batman and Ragman, claiming just the opposite, "No it's OURS!" The thugs begin firing at the crowd as Ragman uses his suit to absorb the bullets and Batman takes care of one thug and Ragman then leaps to punch out the other. Batman asks what happened and the Rabbi retorts that he doesn't know as they have nothing of value in the Synagogue. Ragman expresses the senselessness of staying, not understanding why it doesn't phase the Rabbi. The Rabbi respond by saying that people need places like the synagogue and they need people like him. He says his people (the Jews) have been through much worse before and turns to Ragman as he asks, "Tell me, do you know the story of Chanukah?" 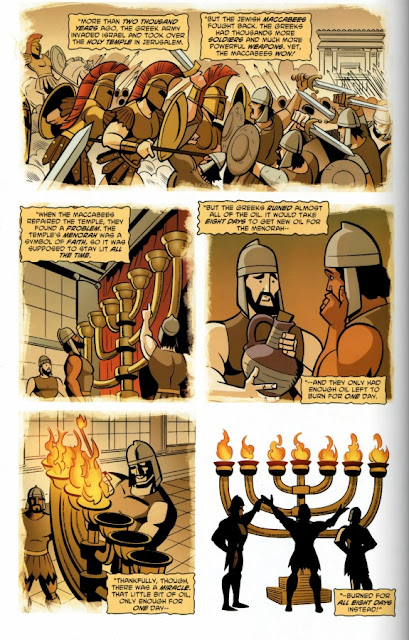 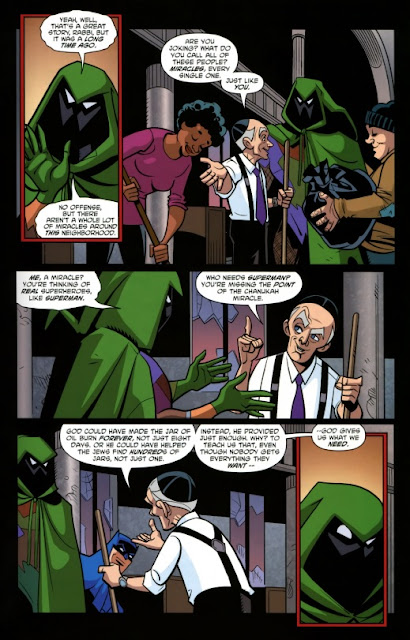 Throughout all of this, Batman is busy messing with the cell phone of the thug. He comes across his call history and discovers that the thug received multiple calls from the MacGuffin Group, the real estate group buying up the neighborhood and forcing people out with higher rents and cost of living. The rabbi confirms this by saying that the MacGuffin Group recently approached him about buying the synagogue. Ragman gets understandably upset and heads off to confront him but, before he can, Batman stops him and says Rags has plenty of take care of where he is, quipping as Ragman did before that, "Uptown is MY responsibility remember?"

Batman quickly pays a visit to the MacGuffin Group and they're promptly turned over to the authorities. A little while later... 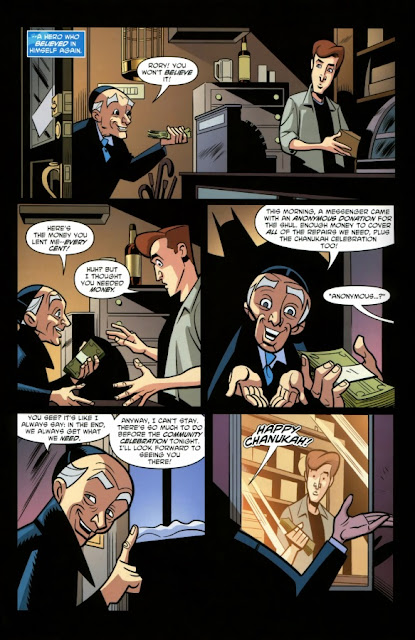 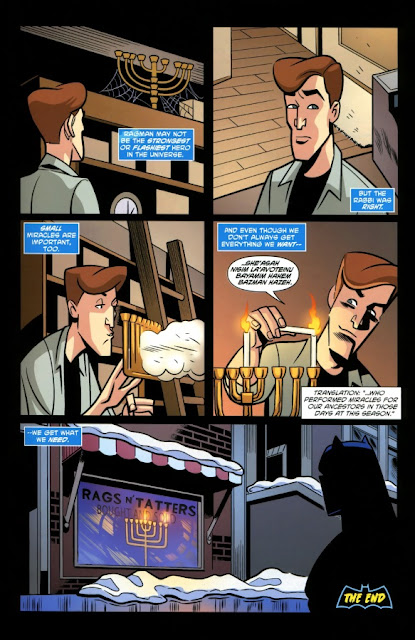 I LOVE this story. It's VERY straight forward and obviously meant to be consumed by readers younger than myself. But it manages to be an EXCELLENT Ragman themed story without being overly dark or preachy. A holiday comic surrounding themes like Hanukkah could quickly be dismissed as overly religious or preachy, but Sholly manages to write it in such a way to tie into the story-line and express more "average person" views such as being a miracle to those around you. Of course themes like "God gives you what you need" are in there, but it's not presented as (and here's that word again) preachy, It's more general good natured and positive vibes instead. A sort of "magic of the holiday season" story set with a Hanukkah backdrop. Not merely a story dedicated to a Judaic "agenda".

And in a KIDS comic to boot.

As for Rory/Rags himself? I don't see anything inconsistent here. Rory was never really particularly religious in his prior story's. He was more of a "traditional Jew" in that he was a Jew by family history/tradition and opposed to a practicing member of the faith. And this captures that quite well. He still has feelings of helplessness and a crisis of faith moments from time to time, which, personally, jibes with my own history with religion.

I was raised Christian (Lutheran specifically) and, without going into specifics, left the weekly church services due to the questions they wouldn't answer and the hypocrisy. I still consider myself a Christian, but the DOCTRINE and the SPECIFICS are no longer things I'm confident in standing by. But I was RAISED in the Church. So, no matter what, there are moments I feel guilty or "off" about certain things that I no longer ascribe to but have a built in concern about because of how I was raised. I wonder if the same is true for Rory?

Though, side bar, isn't it interesting that a man whose power comes directly from a Judaic myth would still be a relative non-believer?

As for the rest? Rory helping the community through Rags n' Tatters was a breath of consistency that I especially appreciated. And the theme of the locals being forced out via a shady real estate developer has a very "Pat Broderick/Keith Giffen 1990's Ragman" feel to it.

All in all, this is a fabulously flawless story (well, so long as you discount the ridiculousness of the opening acts villainous plan).

As always, don't forget to COMMENT on this post directly and let me know what you think! Don't forget to share the blog with your friends! See you around Tatters and HAPPY HOLIDAYS!!!! 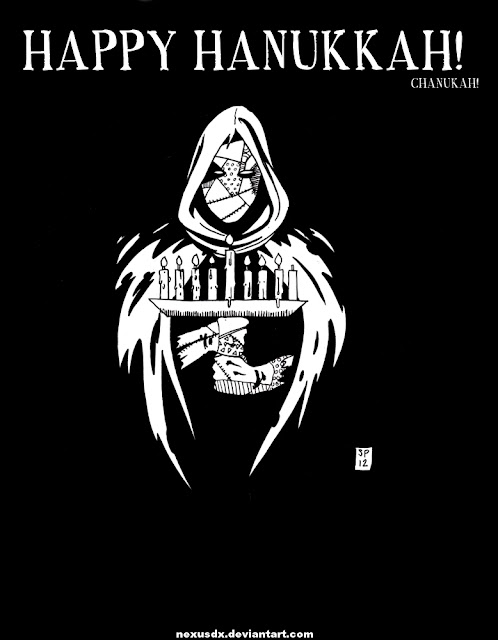 Posted by Chad Bokelman at 4:01 PM