So, for a first post, I was debating about doing just a quick breakdown of why I decided to do this blog. But I figured, "You know what? That's pretty standard, how about I just jump right into it?" So here we go. 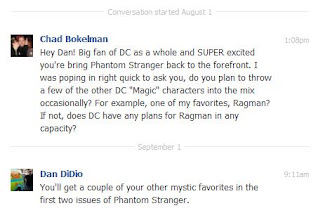 With the DC relaunch of their universe in the form of the New 52, we've seen a lot of reinventions of historic characters in both look and portrayal. However, one we have yet to see is a DC New 52 version of Ragman. Unfortunately there is no official word from DC on if they plan to bring this underused character back into the fold anytime soon. As of right now, it seems as if the best hopes for a Ragman appearance would rest with either 'Justice League Dark' or 'Phantom Stranger'. I shot Dan DiDio a Facebook message a little while back to pry for some Ragman hopeful information.

Unfortunately he had to pull the "publisher reveals NOTHING" card. I get the feeling though that he honestly has no (or is aware of no) plans currently involving Ragman. I had the opportunity for a brief one on one conversation with Dan at New York Comic Con recently and he seemed pretty sure there was no current plan. (if there is one the man has one hell of a poker face)

Other sources, such as this article I read from IGN, seem to confirm my suspicion though. Artist and co-plotter for 'Batman: The Dark Knight', David Finch, spoke with IGN concerning upcoming developments in his run on the series. Finch had the following response to this highly random question from IGN...

So that could mean DC as a whole or just his series (probably just his series). But, other than the two titles I mentioned earlier, having Ragman appear in an issue of a Batman series would be amazing and keep with that traditional aspect of his character.

So, seeing as how there are no CURRENT plans, I shall trudge on! I'll review the old stuff, maybe do some interviews, I'll feature Ragman artwork and cosplay and so on and so forth. So keep you eyes peeled for more content and thanks for reading!
Posted by Chad Bokelman at 8:38 PM